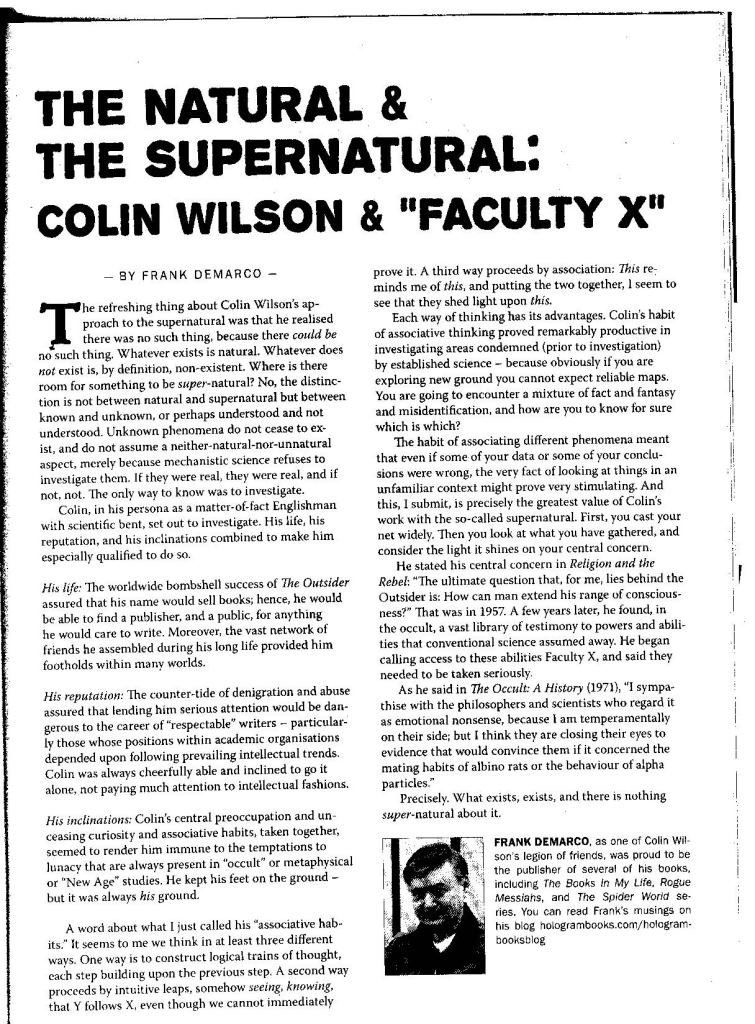 New Dawn is a very interesting magazine published in Australia. (It is on line as well as print; a search will find it.) They asked me to give them 700 words on Colin Wilson and the Supernatural, and this is what i gave them.

When an author is as prolific of Forewords and Prefaces and Introductions as Colin Wilson was, you can bet that sooner or later at least some of them will be collected and republished together, because they often shine as much light on his own ideas as on the books they introduce. Certainly that’s true for the Foreword Colin kindly wrote for my book that was published in 2001. Here it is.

END_OF_DOCUMENT_TOKEN_TO_BE_REPLACED

I was sitting  just now, reading Colin’s much derided science-fiction novel The Space Vampires, admiring how he was weaving into the plot information (specifically, Lethbridge’s dowsing materials) that he had learned and written about. Suddenly I realized what it is about his work that divides people so. More than most authors, he had – has, I should say – a core group of strong admirers and another of vehement deriders. And now it is clear to me why.

He takes these things seriously.

Beginning nearly half a century ago with his initial researches for The Occult: A History, he began reading up on subjects that conventional academics and critics consider beneath contempt. Go down the list of things Colin investigated – just go down the list of his book titles – and you see not one, not half a dozen, but literally countless numbers of taboo topics. Magic. The afterlife. ESP in all its manifestations. Poltergeists. Witchcraft. It’s a long list.

And how to people respond to someone who takes all this seriously?

Well, if they’re like me, they get tremendously excited sometimes, to see someone investigating these reports, associating this and that, questing about for what it can all mean, yet at the same time doing it in what I can only call a non-woo-woo way. Since 1970 when I came across the first of his books, I have never failed to be interested the information he displayed and the connections he made, and I never cared whether I came to the same conclusions he did. (Indeed, once I began having firsthand experiences, I could see how misleading were some of the things he read. But I could never convince him to actively pursue the abilities he wrote about.)

Excitement, interest, a respect for the passionate inquiry and the bold speculation. That’s one possible reaction to the man.

But, reading The Space Vampires just now, I realized why these same qualities may produce a very different reaction. Certain kinds of people have a strong investment in thinking themselves “scientific” or “realistic,” and when they see someone seriously investigating subjects that they just “know” are not worthy of consideration, it sometimes sends them spare, as the British say. They go ballistic, as Americans say. Like confirmed atheists who, as the man said, “believe in no-God, and worship him,” they carry their worship of “rationality” and “science” to the point where they are ready to lead witch-hunts!

Colin Wilson’s unforgivable sin is that he combined voracious curiosity, tremendous energy, widespread reading, extensive networks of interesting friends and acquaintances, and put the resulting mixture at the service of something that – so certain critics say – clearly does not deserve a serious man’s attention. They know this (of course not having examined any of the material themselves) and so therefore they know that Colin Wilson’s work must be rubbish – and it infuriates them to see how many people, all around the world, decade after decade, insist on taking him as seriously as he took the data and the ideas the data suggested.

Some sin. Wish we could bottle it.

Colin Stanley kindly sent me a copy of the obituary for Colin Wilson published by The Times of London. No surprise, they provide only a superficial and condescending view of his life’s work. It says he was “at home to a trickle of visitors who had not forgotten who he was,” implying that he was largely forgotten. No hint here of the vast audience he won worldwide, presumably because we don’t matter, being unable to see that he has nothing serious to say.

(I am amused to see that they take him to task for inaccuracies but they themselves can’t even count. Born June 1931, died December 2013 – age 83? Maybe they were rounding upward.)

Oh well, here’s what The Thunderer had to say about Colin’s life.

END_OF_DOCUMENT_TOKEN_TO_BE_REPLACED

My friend Damon Wilson, Colin Wilson’s son, tells me that he is writing a book, to be titled An End to Murder, that incorporates his father’s last hundred pages of original writing. It looks at why humans are so violent — and why the violent crime rate has dropped so dramatically, worldwide, in the last two decades. He said, “I’ve only written about half the book so far, but was inspired to write the final, short chapter last time I saw Dad alive. I’ve attached it, since it’s my summing-up of how I feel about my father.”

With Damon’s permission, here it is.

The odds against your existence were astronomical. Your parents had to meet and then make love – the latter act at just the right time for the egg with the correct genetic mix to be available. Then the right sperm had to beat thousands of others in the race to that egg. Your mother had to carry you through pregnancy, without miscarriage, and successfully deliver you. Then you had to avoid being killed – by accident, disease or other people  – up to at least this point in time.

By twelve generations back from your conception – roughly 300 years – your direct forebears will have numbered 4,096 individuals. Just like you, the odds against each of those people existing, and living long enough to produce your next forebear, were incalculably high.

Now take that already inconceivable level of improbability, then add all the generations back to the first proto-human hominid that was mutated enough to branch us away from the ancestors of the chimps and bonobos. Break any part of that immeasurable chain of events, and you would never have existed. So, the odds against your existence were astronomical.

And that is true of every person that you have ever met, ever heard about, ever existed. But, of course, that is also true of every cold virus you ever suffered from, or fly you ever swatted. So add to the mix the unbelievable achievements of our species…

Surviving the great African Miocene drought, that destroyed so many other types of primate. Part-evolving into a water mammal and thus developing our strange method of walking. Using our dangerously ungainly bipedalism, and our pack instinct, to become lethal predators. Creating basic tools. Growing an increasingly powerful, but energy-expensive brain. Learning to talk. Learning to think in abstract terms. Colonising the planet. Surviving a brutal ice age, and surviving our Neanderthal cousins. And all that only takes us up to the evolution of Homo sapiens sapiens and the pre-dawn of civilisation.

Then there is the nebulous matter of human potential to consider. We may be the most selfish creatures that the planet has ever seen, but we are also the most selfless. Although individual members of other species can and often do sacrifice themselves, they do it because of undeniable instinctual drives. We are the only animal that will coolly and rationally decide to risk or sacrifice our lives for what we understand to be the greater good. Somewhere on the globe there are members of the emergency services, soldiers and just ordinary citizens who are squaring-up to that decision as you read this.

No other species is as intellectually capable as we are: both capable of creating wonders, and capable of destroying the planet. We are the only beings on Earth who seem to have the ability to feel both bitter misanthropy and generous optimism. As G.K. Chesterton noted:

“Man is an exception, whatever else he is. If he is not the image of God, then he is a disease of the dust. If it is not true that a divine being fell, then we can only say that one of the animals went entirely off its head.”

The premature death of anyone, seen in these terms, is a loss to the world that is beyond our understanding. The destruction of the most precious work of art is nothing compared to it. Every human-being who ever existed is irreplaceable.

George Orwell tried to express the commonplace catastrophe of that loss when he wrote about his experience – when a British Imperial Policeman in Burma – of taking a man to be hanged:

“He and we were a party of men walking together, seeing, hearing, feeling, understanding the same world; and in two minutes, with a sudden snap, one of us would be gone – one mind less, one world less.”

My father has always been a deeply humane and optimistic person, some of which has rubbed-off onto his children. I’ve known him to be on perfectly happy conversational terms with some of the most celebrated people of the past half-century. And with brutal murderers.

When all is said and done, he has always seen people as beings of fascinating potentiality; all worthy of delighted wonder, if not always respect.

My friend Sandra Martin, at the time a New York literary agent, knowing of my admiration for Colin Wilson, invited me to meet him and his wife Joy at a party. So I took the train up to New York (spending the time re-reading the Mind Parasites) and indeed we met and hit it off immediately. Oddly, it was March 17, 1995, St. Patrick’s Day, and the first words I heard as our hostess opened the door was that Bob Monroe had died that morning.

Very strange, given that one reason I wanted to meet Colin was to recommend that he do a Gateway Voyage. Here, Colin and Joy Wilson and unnamed friend, looking awfully young. 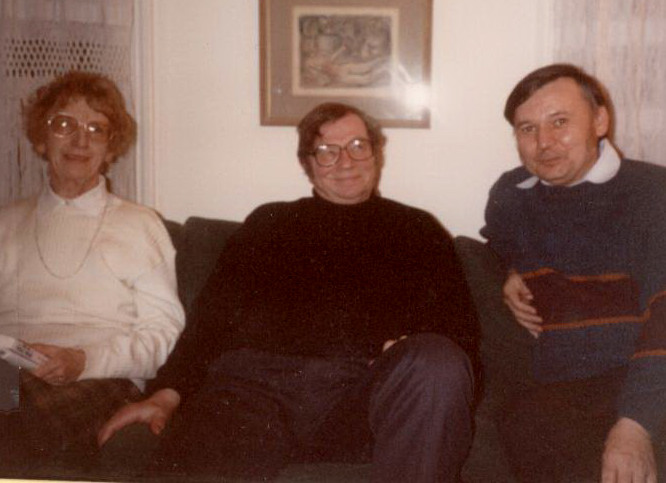 News of Colin’s passing sends me back not to the friendship we began in 1995 but to the very early days, when he didn’t know I was on Earth, but changed my life. I wrote about it in my book Muddy Tracks: