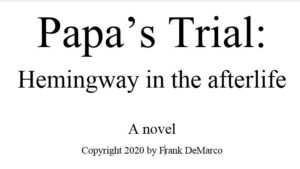 Chapter 3: The War at Home

His mother had chosen her dress and her apparent age from 1899, the year he  was born. William McKinley in the White House, Teddy Roosevelt still Governor of New York. Well, it would make sense that’s when she would choose, she was at her peak then. Young, talented, still beautiful, married to the vigorous young doctor.

“Mrs. Hemingway, one of the roles you came into life to play was as Ernest Hemingway’s mother. Perhaps you could begin by telling the court what that experience meant to you.”

She beamed at the prosecutor. “Well, of course his father and I were so pleased and proud that our eldest son proved to be so very talented and successful. To think that he spread the Hemingway name across the world! It would naturally make a mother very proud.”

“Yes, Mrs. Hemingway, but for the moment I’d like us to concentrate not on the author but on the boy, and the teen, and the young man. Tell us, if you would, what that was like.”

“Ernest was a sensitive child, very sensitive, he got it from both sides of the family. It made him somewhat high-strung. Self-control was always a difficult issue for him.”

He could feel himself bristling, but worked at preventing his reaction from turning into thoughts that would be overheard.

“As a little boy, he was so affectionate, and we were all so close. His father taught him hunting and fishing, and living in nature, and I taught him to appreciate music and the finer things in life. He always had a keen imagination and he was always overflowing with enthusiasms.” She smiled, almost laughed. Boys can be a little much for a mother to deal with, you know. I used to tell myself there was a reason why the word was `boisterous’ and not `girlsterous.’ But I never minded it, in fact I was proud of it.”

“Was he a lot of trouble as a teenager?”

“Nothing out of the ordinary. He loved to fish, and to camp out, and go on little excursions with his friends, and he did his full share of chores during our summers in Michigan. And in high school, he worked on the student newspaper, and was part of the literary society, and the football team, everything. He was a normal happy boy, until he graduated from high school and went off to Kansas City to work. I thought he would grow up to be as fine a man as my father.”

“Mrs. Hemingway, you testified that when the defendant was a little boy, `We were all so close.’ Did that closeness last, or did things change?”

She knew what he meant, of course, and she knew that Oak Park reticence was impossible when everyone could overhear what you knew. Still, she chose her words carefully. “Everything changes with time. Life always brings new problems. For many years, my husband was a loving husband, a good father, a competent, caring physician with many outside interests. But, over time, he became more rigid in his views, more demanding of others, less able to bear contradiction.”

“Did you see this as mental illness?”

A hesitation. “We didn’t have the distinctions you have today. To us, mental illness would have meant crazy, and he was not crazy. He would get ‘nervous,’ we used to say.”

“Presumably this affected his relationship with his children.”

“With all of us. We tried not to set him off, but it became difficult. He seemed to find life less and less bearable, year by year.”

“Thank you, Mrs. Hemingway, you may step down. The prosecution calls the defendant.”

He turned to the defense attorney. “They can do that?”

“As I said, Mr. Hemingway, procedures here are flexible.”

“What about my right to not incriminate myself?”

And there he was testifying.

“Mr. Hemingway, you heard your mother’s testimony. Do you think that your father became mentally ill?”

“Mental illness wasn’t allowed to exist in Oak Park, it would lower the tone. But sure, it’s clear enough. I really noticed the change about when I became a teenager. I thought maybe it was because didn’t like what I was becoming. I remember how my hands would sting from being hit with a switch. And all those confessions, asking God to forgive me, and half the time I couldn’t even quite figure out what I had done, or hadn’t done!”

“And what do you think caused it? Was it something you did, or didn’t do?”

“I think it was from living with my mother.”

“Mr. Hemingway, consider carefully. Do you think it is that simple?”

He replied slowly, watching his thoughts marshal themselves. Such a change from the fog he had been living in.

“I was there. I saw it. I lived with it. I think the story of my father’s life after a certain point was his living with a continuous unbearable pressure that wore him down. I think it gradually exhausted him, having to live with my mother and her ancestors and her standards and her certainties and her expectations and her implacable will. He and mother couldn’t harmonize. Surrender isn’t harmonizing. I think he kept trying to put rules into effect, so he’d have some control over his life, and when we couldn’t live up to those rules to his satisfaction, he blamed his rage on that. He took it all out on everybody, and he didn’t know why, any more than we did.”

“Mr. Hemingway, let me suggest a scenario. You loved your father. He became mentally ill. Since the times didn’t recognize it as an illness, and since it was too painful for you to think of him choosing to be irrational, the only thing left was to blame somebody else. And there was Grace Hall Hemingway, born to play the part.”

“Well, I disagree. Why don’t you ask dad to testify?”

“Because this isn’t about your father. It is about you.”

“You know, I’m sitting here trying to think, when did dad lose his grip on life? I think maybe it was when he lost his joy in the physical world, because then he had nothing to refill the wells.”

He understood the prosecutor’s ironic expression.

“Okay, I know I’m painting something of a self-portrait. But I’m talking about my father.”

“After high school, you went to work at the Kansas City Star. To get away from home?”

“Really, I wanted to enlist, because we had entered the war in April of my Senior year. But I needed dad’s consent, and he wouldn’t give it.”

“So instead you went off to work as a reporter.”

He grinned, remembering, after so many decades, how it had felt. “It was so much fun, and they were paying me! I couldn’t get enough of it. It was hard work, damned hard, but it didn’t feel like a job at all. It was a great opportunity for a kid.” He grinned again, remembering the boy he had been. “I had to cover cops, and the hospital, and the railroad station in case some celebrities might come through that I could interview. And sometimes I’d go off to the hospital and the paper would be trying to get hold of me and they couldn’t because I’d gone off with the ambulance, or I’d be supposed to get the news from the fire station and I’d be riding on one of the fire engines. I had so much fun! Of course in those days I still had two good legs to run around on”. Before his eyes was a picture of himself as he had been, all eagerness and enthusiasm and a boy’s fascination with seeing things from the inside. “Kansas City was a world apart from Oak Park.”

“But although you were having so much fun, you stayed only a few months.”

“Well, you know, I wanted to help make the world safe for democracy. The Army didn’t want me because of my bum eyesight, but then, by luck, or fate, or something, Ted Brumback hired on with the Star, and he and I became pals. Brummy had been driving ambulances in France, and he was going back as soon as the winter was over. He told me they always needed drivers. My dad still objected to my going into the army, but by the end of the year I got him to agree that I could go with the ambulances if they’d take me. A bunch of us from the Star decided we’d try it together, and they accepted us, and that was the end of my time as a reporter.”

“Very well. Let us proceed to your first experience of warfare. The whole world knows that you were wounded in Italy on July 8, 1918, two weeks before your 19th birthday. Please tell the court how you came to be in that particular place at that particular time.”