Three strands converged during my time in Egypt, with very satisfactory results. At first glance, the three might seem to have nothing to do with each other, but believe me, they do, they do. And the reason to mention them here is that I think they are available to pretty much anyone who wants them. it isn’t a matter of having to be born with special abilities or of spending years in esoteric training. It’s more a matter of adopting a certain attitude.

The phenomena themselves are not anything new, and I hesitated to give them labels, lest the words mislead. But we use words because words are what we have to work with. The thing is to remember that, as the saying has it, the map is not the territory. 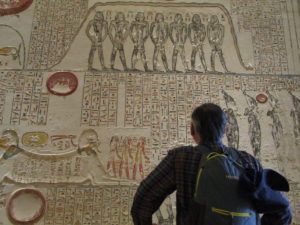 As I mentioned in an earlier post, in hoping to experience greater connection, I set out to be open to anything while being careful not to put story to it. It’s one thing to have a real experience, but it’s something else again to know what that experience was, what it meant. On the one hand, you don’t want to be so closed that you miss what’s available; on the other hand, you don’t want to be so hungry for an experience that you allow yourself to make it up, or to embellish. It’s not an impossible balance to maintain, but it does require a certain vigilance. And it means you probably wind up impacted by something without knowing why or how. Perhaps you don’t know anything about it. All you know for sure is the impact it had on you. But if the impact is strong enough, you do know that!

So, case in point, when we were in the Valley of the Kings, the first tomb we went into was that of Ramses V and VI. I can’t say what that site did for others; for me, the impact of the hieroglyphics was absolutely stunning. The hieroglyphics were still in full color after so many centuries hidden from the sun. They were mostly intact, though of course here and there some had been damaged. The indirect lighting, top and bottom, did a superb job of illuminating without glare. So, in short, all the conditions were ideal. But that doesn’t explain why I spent an hour and a half in there, inching down the passageway, slowly absorbing what I was seeing, mesmerized by signs I couldn’t read. When I came out from the tomb, I didn’t have any interest in seeing another. How often does it work, when you try to improve on perfection?

Externally, it was an esthetic experience, but as usual, what was important was invisible, and, also as usual, is not very communicable in words. I had entered into the tomb in an attitude of expectant openness; then the entirely unexpected visual impact of the hieroglyphics had moved me well beyond words. I stood there stunned, overwhelmed. I made no attempt to deduce what the symbols were saying. In context, this would have amounted to trying to guess, even if I thought of it as intuiting. Nor did I make an attempt to apply what little I had learned of symbolism. I came to it like a little child, absorbing the impact of something I made no attempt to understand. (Indeed, at one point Ruth came over and wanted me to notice something that would have required intellectual processing, and I had to tell her that I couldn’t function that way at the moment.)

If I had been trying to put together a story, an explanation, a fantasy, or if I had attempted to consciously communicate with Joseph the Egyptian, I could not have gotten from the experience what I did get. Writing this now, more than two weeks later, I am surprised to realize that I never thought to try to contact Joseph. You’d think it would be a natural development. But I did not, and I can see that it was good that the thought never crossed my mind. I was wide open to input; I added nothing of my own. In this I was working from a sure-footed instinct, but it was only later, thinking about it, that I began to see why this was the right approach. 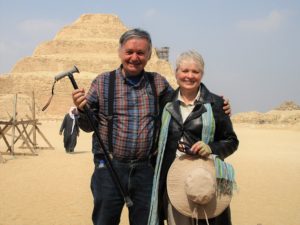 Years of experience (including years of learning to overcome incorrect ideas) have convinced me that any of us may learn how to help others to heal themselves. But this is not the same as saying that some people “have” a gift of health that they can bestow upon others. It can look like that, but I’m pretty sure that isn’t what happens. Conveying healing energies often amounts to little more than helping others to recognize (or remember) that they themselves have access to all the healing they need.

Case in point, Diane Mullins, one of my fellow excursionists (who has given me permission to tell her tale). Diane has traveled to Egypt something like 15 times, having been fascinated by it since she was a child. She was planning to do Ruth’s tour again in 2019, but early in 2018 she broke her left femur a couple of inches beneath the hip. To provide her the needed support, surgeons had to put in a rod, and of course in the process they had to cut though the muscle groups. All that surgery requires recuperation time, but at the time she assumed that by February, 2019, she would be walking normally again. Didn’t happen. Healing was so slow, so unreliable, that she several times considered canceling. In the event, she came, but she came still relying on a metal cane, still having to give thought to how to climb or descend stairs, how to walk on uneven ground, etc. Not much fun.

Well, on the day we visited the Saqqara pyramid, she and I got to talking. and I offered to work with her, leading her through some second-body exercises, and then suggested that she try walking without the cane. We were on very uneven ground, part of it paved with stones that were flatter than cobblestones, but not level. It made an excellent test. So she walked, and I walked beside her so she could grab onto my arm if need be. And that was the last time she used the cane. In half an hour, she went from being dependent upon it to being entirely independent of it, and never used it again.

I was astonished. I had thought to plant a couple of seeds that might or might not germinate. What I had not known is that she was very accustomed to doing energy work, which of course implies openness to energies and lack of resistance to non-physical manifestations of healing. Without resistance, and with experience in channeling those kind of energies, she was ready for her miracle.

It was only after I returned from Egypt and thought about what I had experienced that I recognized the similarity between the process of connecting without adding content and the process of helping someone convey healing energies. In both cases, it is a matter of your 3D consciousness being willing to channel energies from beyond your conscious control, without insisting on imposing meaning or content of any kind. It is (I realized after still more pondering) a matter of cooperating with your larger self without insisting on trying to run the show.

And that gave me the clue to the meaning of the strongest yet least tangible experience I had in Egypt, something I can only call energetic psychometry. I find no photos to illustrate or even hint at the process. An illustrative photo would have to show me with my hand only a couple inches from carved stone, absorbing the energy without quite touching it.

Psychometry, you may know, involves holding an object and receiving psychic impressions from it. That has never worked for me. The tactile sense seems to overwhelm anything more subtle, or perhaps it is just one of the gifts I have not been graced with. But what does create an impact, at least for me, is to be within a very few inches of the object and open myself to the energies. Again, as in the two previous examples, this comes without substantive content. I don’t “see” or “feel” or even “know” things. So, in that sense, it isn’t psychometry at all. But I did experience something else, with ever-stronger intensity as we went along.

And that something was –? Well, eventually it came to feel like a buzz, an energetic buzz. It was as strong as I have ever experienced, stronger than person-to-person exchanges, for instance. But again, it had no intellectual content. I did not put my hand near a carved hieroglyph and come away “knowing” I had been King Tut, or somebody. Quite the contrary: Each time, I came away feeling the strength of the connection and having no slightest clue what the connection actually was. (Well, one slight clue, perhaps. I noticed throughout the tour that my interest centered on New Kingdom, with only a casual and almost negligent interest in other periods. It was as if New Kingdom was me visiting home, and other periods were me playing tourist.)

Possibly I shouldn’t admit this, but often as we were being shown some detail, or being told of the history or context of something, I would realize that i was standing there somewhat bored. I’d move my hand closer to some carved stone, and the buzz would be back. What I think was going on (though of course how can I know) is that in those times I was directly reconnecting with whoever and whatever brought me back to connect with ancient Egypt. There was no intellectual content for 21st-century me to chew on, so I functioned as a conduit rather than a tour guide, and we’ll see where that connection eventually leads me. But the three kinds of experience all flowed together, and, as I say, provide a hint as to a productive approach to connecting with our larger selves.

As I say, quite satisfactory — if I can hold on to it. We’ll see.