Thursday Sept. 15, 2005. At suppertime I go back to Lewis and Clark and pick up Ari, and she and I go for supper downtown. (We get lost a little, or rather, get carried by traffic and slow reflexes across the river, and have to find our way back without being carried into Washington state.) The last time I had seen her, she was in high school, and here she is a sophomore in college, poised, intelligent and happy. (I can’t remember being poised, intelligent and happy at that age – or, for that matter, since.)

We eat at a nice Indian place she knows and we walk to Powells, for why would anyone visit Portland and not see Powell’s? But I have no real taste for book shopping. For the moment I have had enough of books, and besides, I have been up since 4:30 a.m. eastern time. I do find a Robert Crais I had been waiting for, but I am too tired to do the extensive browsing that once would have been a matter of course.

We have to cut the evening short, not only because it was three hours later for me than the clocks said, but because I am loathe to be driving after dark. Ever since a night a few years ago in Denver when I found myself road-blinded by some construction arc lights and couldn’t see the lanes of the road, I have had a healthy distrust of my ability to drive safely at night, especially in unfamiliar areas. So I get Ari back to the dorm and say goodnight, expecting to see her again the next day, after her classes were over.

Instead, I call her Friday morning and beg off. The very thought of spending all day in the city is more than I can bear. This is no condemnation of Portland. It looks like a nice town, clean and prosperous and no doubt filled with many interesting things. I enjoyed my little time in the museum, and I liked the restaurant, and had I been less tired probably I would have liked the bookstore. A town built around a river would have interesting walks too, I should think.

Nonetheless – and it really strikes me, seeing how depressed I am at the prospect of spending even another day and night there – although I have spent years living or working in cities of various size, the older I get the less I can stand their energy. Put me anywhere outside and I can be happy. Confine me to a city and I have to work a lot harder at it. I realize this more or less all at once, and that first day is the only time I spend in a city until the night before my flight to California. After all, I don’t have to stay in the city if I don’t want to. I am on vacation.

6. The Graveyard of the Pacific

Friday Sept. 16, 2005. I had thought to start by seeing Mount Hood and the Columbia River, but since I am on the west side of Portland and don’t want to go through town again, even by freeway, I think, reverse it. Start with Astoria and the Pacific coast. So, since I can’t figure out how to find 30, I go out 26 and therefore go up past Seaside and east over the bridge into Astoria. As I make my way through town, I see clearly that this is a working town, not just a tourist attraction. Working on the river is like most other kinds of physical labor: tough, not particularly well-paying and occasionally dangerous. Driving through what looks to be the rougher or at least poorer part of town, I think for some reason of Jack London. 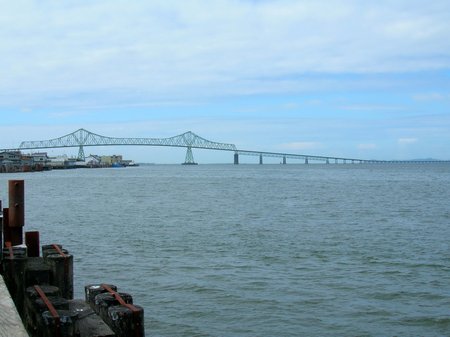 (The Columbia, looking west from the museum.)

Looking at the map, I had decided (intuitively, as I decide most things, rather than logically) that if I saw nothing else in town, I wanted to see the Columbia River Maritime Museum. It contains numerous exhibits on all aspects of life on a major river: lifesaving, fishing, navigation….

Beside the building, living out its retirement, is the lightship Columbia, and visitors are encouraged to tramp around, above decks and below, to get a feel for how crews lived for months at a time, a few miles out to sea, their only duty to keep their floating lighthouse in working order. 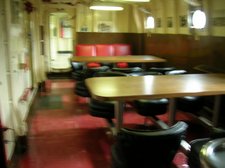 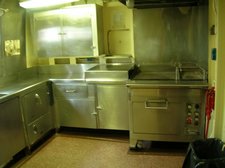 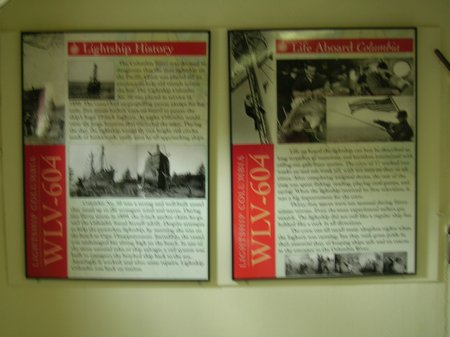 The ships carried something like 26,000 gallons of fuel! They came in – not very often. Add monotony and routine to wild changes of weather and it must have been a life something like what we would associate with polar explorers.

But if their life was hard, what must it be like to man a rescue boat? The museum has one on exhibit, mounted at a steep angle, 50 degrees or more from where the horizon would be, climbing amid a representation of the kind of waves it had lived among. The stern was at eye level, the bow far above. Dummy crewmen in regulation rescue gear manned it, one concentrating perhaps on helping someone in the water. I may have the detail wrong, for my attention was mostly on the film running on the television next to the exhibit.

The film was stunning. Here were storms such as I had never seen, with tiny boats like this one – including this one, in fact – fighting their way among them. Great masses, cliffs, avalanches of water fell upon the boat, burying it – and it came surging up out from under, shrugging it off, doggedly plowing on. Men went out in these boats every day, in every kind of weather, dedicated to safeguarding lives and property, to rescuing whatever could be saved.

The sheer power of it! The brutal weight of so many tons of water, contending against an unrelenting west wind! All that water – more water than any river system in the United States except the Mississippi – and at the mouth, huge, ever-shifting sand bars, making the mouth of the Columbia is the most dangerous in the United States, perhaps in the world. Hence, “The Graveyard of the Pacific.” Hence, 2,000 wrecks in 200 years.

The bar of the Columbia is so dangerous that only locals can amass the intimate knowledge required to bring shipping in safely. To navigate the Columbia, ships are required to employ not only a river pilot, but a bar pilot, and a 12-minute film on life on the river shows that they would be insane not to. It doesn’t take long, looking at that film or listening to recordings of rescue attempts, to understand why.