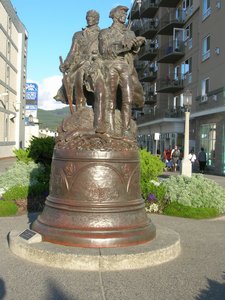 Â Friday Sept. 16, 2005. From Astoria I retrace my steps to 101, figuring to make my way down to Florence, where I would turn inland, but not caring how or when I got there. A sign catches my attention, and I turn off toward the sea. At the end of the road is a parking lot and beach access, and I spend a good while on that wide, flat, gritty beach, with its backdrop of dark blue sky and ever-changing, delightful clouds. Across from the lot is a Vacancy sign, and so I spend the afternoon on the beach and the night in a rented condo unit whose windows open up to the sea

Seaside is a pleasant little town, whose claim to fame is that men from the Lewis and Clark expedition spent time there turning Pacific salt water into salt they could use on their return journey. This made Seaside the westernmost point of the expedition, and it does its best to make the most of the distinction. A street leading from 101 dead-ends in a little loop around a statue of the two explorers, and it is mildly comical to watch a stream of cars come down the street to the statue, proceed around the loop at scarcely diminished speed, and go off in search of other cultural diversions.

It is a pleasure to walk rather than drive to the town center for supper, and of course, walking, I observe much more. The quiet neat pride of the home-owners is obvious, as is the small-town air that can I can always recognize but not describe. As I walk those few blocks, passing those well-kept houses and lawns, I am troubled by the premonition, steadily growing clearer, that has underlain my life for more than 30 years. I have lived my life expecting Earth Changes.

It seems to me that in the past 25 years, arbitrarily starting with the eruption of Mt. St. Helens, those changes have begun and gradually have picked up speed. We who live through them experience them as disconnected incidents, separated by months or years, and seemingly having nothing to do with one another. But I think that future historians, in that combination of distortion and improved perception that comes from looking backward, will see more of a continuous series: the 1973 earthquake in Nicaragua and Mt. St. Helens, and Andrew and Hugo and Katrina, and Northridge, and the world-series earthquake in 1989, and the tsunami in Indonesia, and the earthquake in Pakistan, et cetera, et cetera.

More than that, I think they will see clearly that in these same decades climate change finally got out of control. We see killer heat-waves in Europe, and the melting of glaciers in the Alps and in Greenland, and the disappearance of snow packs on Kilimanjaro and in the mountains that are the sources of Asia’s four great rivers. We see the disappearance of ice shelves in the Antarctic, and the ice packs in the Arctic Ocean, and permafrost in Siberia. All this spells warming.

Paradoxically, this may mean that some areas like Europe get colder, if the Gulf Stream, upon which Europe’s abnormally mild climate depends for moderation, is disrupted by freshwater caused by the melting of Greenland’s snowcap. But if all this climate change does not add up to great rises in sea level, I for one will be astonished – particularly as this is what I have been intuitively expecting for nearly half my lifetime. No one on earth can say how high the sea level may rise, or how quickly. (For years scientists maintained that the Ross Ice Shelf couldn’t break up in less than decades – and it went in a matter of a few weeks in 2002.) So when I read statements that increases in ocean levels are a generation or more away, I am not convinced.

Walking along that pleasant sea-level town, I can’t get it out of my mind. When the sea rises, what in the world is going to happen to them? 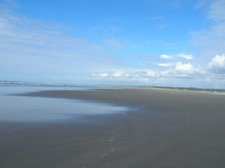