Saturday, June 30, 2007
Nearly 10 a.m. awoke thinking of something worth recording here, but too many things between awakening and picking up the pen. That’s why I often do my morning’s work before I shower and shave.

So — if one of you splendid gentlemen will deign to get on the line and remind me — or set some other rabbit running — I’d be obliged as usual.

I had a stray thought that I put on the blog this morning — I used to think that what a person made of his mind — the things he learned, the connections he made — were lost when he died. It made everything seem so pointless. Realizing that the pattern of mind created by that effort survives and is there to be used recasts it in a different light entirely.

There is much more, obvious to me but probably not to others (because of just the kind of work I have been doing, it occurs to me!) and would need to be spelled out.

It’s hard to find the organizing principle that will let me spell it out, who and how this network is used. So, friends — David, if no other is more appropriate —

We appreciate the difficulty — perhaps now you will appreciate ours, over the years!

That’s right. We’ll try, anyway. Right-brain pattern appreciation, remember, because words can explain and amplify and clarify but alone they can only mislead.

All right, you’ve got a clean page to work on. Okay, I heard that, I’ll do it in pencil against the need for revision, and comment as you or I decide it would be helpful. Do you want to talk about it first or draw first? Draw first, I heard it, and heard the reason why: so I don’t get into the act more than can be avoided. 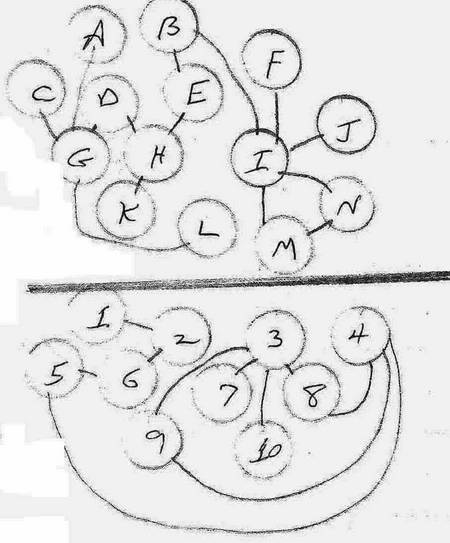 [Minds on the other side, the arbitrary non-existent line between 3-D and non-3-D, and minds in 3-D The lines are links of affiliation, temperament, etc. that organize the entire field.]

Every conceivable situation exists — some are great networkers. Some are much more solitary. But ultimately everyone connects, on either side of the veil.

And bear in mind here, this is radically simplified. It takes no account of the multiple overlapping layers of relationship that become more obvious as you look more deeply in time and space.

Nonetheless you can see that things connect not simply and uniformly like single-cell organisms, but complexly like the physical body. Envision this diagram extending backward into the page and forward from the page — in 3-D in other words, and you will begin to get a visual sense of the complexity that would require some level of drawing skill to suggest.

Now, it is a good working model to say “I’m going to connect with the guys upstairs” assuming that you come from a place of confidence and altruism — then you won’t run afoul of uncongenial spirits (to put it mildly) because you will not be “calling” on their wavelength.

Go back, now, and pencil in letters for the circles on what you call the other side. Just do it arbitrarily; there is no meaning of hierarchy implied by the letters. Now number your individual’s on your side. This will make it easier to describe the process.

Suppose A knows chemistry, B psychology, F practical politics, and J is an artist. That’s enough complexity to be going along with.

Now if you were to think of these things as abstractions you’d have a logical, probably symmetrical structure, probably pretty static.

But considered as minds, you can see that it is much more dynamic. Perhaps A connects to G because one is parent and the other is child. Perhaps G in turn connects to C, D and L by profession, affection, and kinship respectively. (And here you see the tip of the iceberg of complexity: if G is kin to A and L, L is in some way kin to A as well as G.)

This is all from one point of view, by the way; another person’s map of the same minds might have some ties more prominent than here and others less.

Now if 1, say, which is to inquire about chemistry, he may need to talk to A. If they are close enough in wavelength that it may be done directly, well and good. If not, then silently and unobserved by 1 or openly and described to 1 (as a “control,” say), whoever 1 can reach links to A for him. So it may be that 1 can link to I (a good networker). The chain may have to go like this: 1 = I -> B -> E -> H -> D -> G -> A and back! But once 1 and A have once linked up, the intermediate chain may be dispensed with, as they will by the process of information transfer have established a direct link.

In a future exchange, 1 could then perhaps go by way of A (silently or explicitly) to reach G and any that connect via G by a shorter or more direct route. Thus the network is ever changing.

Note — this beginning of an explanation does not address the question of active cross-communication entirely on the side. Neither does it do more than hint at the effects that are made possible by communication of, say, I and A via 1.

Thus, Hemingway meets your father, and both learn the latest news of Earth (so to speak) which becomes a part of them and changes them — and it all is continually changing and becoming ever more complex.

That’s enough for now. You haven’t the energy available to begin a new complex thought.