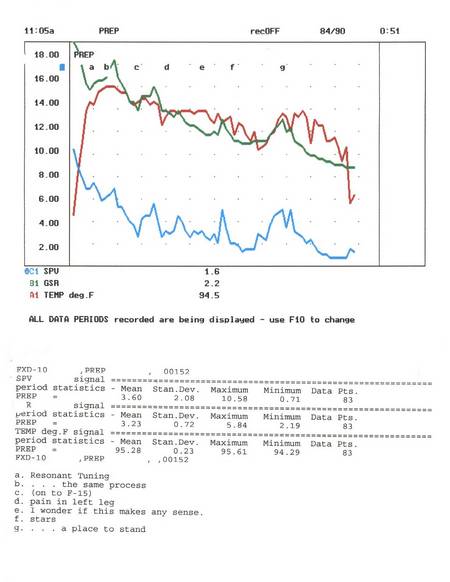 F: Was that really 84 minutes?

F: But there’s no time…. What do you see, from that chart?

S: I saw early on – you know, you can see this typical relaxation and then when you had to go to the bathroom, it started tensing up, and you dropped off dramatically. You can see your physical tensing up.

You took off headed down real quickly here, and I thought, like I always think, that your talking restricts you from going down further, but you kept going down further and further and further; then I said to you, “well, let’s try this new thing; let’s have you not talk for a while.” And you got all excited about that for a while and you had to adjust to that concept, but then you started to settle way down here, with the exception of then your bladder kicked in here.

F: To me, I don’t see any difference in this curve [before the experiment] and this curve [after]. It’s the same – in fact, this one didn’t really get any lower than it was, and now I don’t have anything to bring back. At least theoretically.

S: Yeah. Again, notice how these peaks here are brought up by the GSR. They’re right underneath the GSR. This means —

S: Right. So electrically it stayed down there, but – you understand Ohm’s law? When you change the resistance the voltage changes. So this is not a true change in voltage, it’s only because the resistor changed up here, the body resistance changed, so the true track was to stay down here.

F: Okay, so I don’t think this would demonstrate that in fact talking does inhibit my experiencing. I think it’s an inherent part of me to experience it.

S: I agree with that. Looking at the raw data. But my experience of watching you do it, I have this feeling which isn’t born out by the data. So, I am wrong, that it’s okay for you to move down into those zones and keep talking, because this says so.

F: I see. [Teasing:] And of course, we’re going to believe this, rather than believing me, you’ll believe some instrument you never met.

F: Yeah, I know. Do you remember early on I said I was – because that’s something I learned in this series, about staying in it and talking, and not getting bounced out of it —

S: Yes you said that in the very beginning.

F: And in fact, I was able to do that, at least I felt like I was doing that.

S: And this shows that electrically you were. Despite my feelings at the time, this shows that “oh, well, he was.” And of course, you can see here that this is the drop-off of the tensing of the body with the bladder —

F: Well, how long are we looking at? That looks like a longer portion than —

F: You think I was fooling around like that for ten minutes?

F: Hmm. Well, my sense of time is all messed up, of course.

F: Yeah, I looked at this one, a place to stand. It’s like, you know, that was the climax of the whole —

S: And there were some conclusive things that you said at the end, like, “well all this time, what this has meant is this,” and, “remember when this happened? Well, that’s what’s meant as this”

S: And then that was like this huge conclusion, and I agree, it was.

F: I think those clever little bastards thought, “we’d better put the conclusion in the middle.” [they laugh]

S: Well, and, again my test of having you not talk did not change this at all.

F: Mm-hmm. You were thinking I might drop down to the null point, right? It’s only two.

S: Right, exactly. But that is not the case. Talking does not keep you from moving in your consciousness.

F: I wonder, Skip, if this isn’t a function of the same thing you discovered back in ’94; that I’m here and there at the same time.

F: I just sort of — fluctuate.

S: Of course. I think one of the comments I want to make about your narrative is, when you go over it again and listen to it, there is a stumbling over who is asking and who is answering?

F: Mm-hmm. I remember that.

S: Which I think is deliberate Guidance.

F: I’ll listen to it again and see. They’re awfully intrusive. [they laugh]

I remember – I hope I will remember in context what it meant – I remember saying, well there’s two of us in here. And I don’t remember what the context was.

S: That was some time earlier than what I was talking about.

F: It was something about a change in perspective, or seeing it in two –

Oh! One of the things that happened that I didn’t talk about, because it was in that silent period – and I think it’s quite significant, actually, and I would have forgotten it – I was taking a canoe up the river. One of Ed Carter’s thought-powered canoes, because you don’t have to work at it. And I had the hardest time keeping my perspective [as if coming] from the canoe. Mostly my perspective was a few hundred feet above the canoe, watching. And then I could bring it down into the canoe, and seeing the scenery go by – and then it would pop back up and I would be watching – and that’s the way it is with my life, as well. And I think that’s what that analogy was. You know? It’s as much watching Frank go through his life as being Frank go through his life. And I don’t know that that’s a problem; I think it’s just a situation of when you’re in both places at once.

F: And it’s confusing until you realize what the hell’s going on. [laughs] That was the most interesting part of that as I remember it. I hope I can remember other stuff. See, if I could have recorded it, I would have got it, and I don’t think it would have affected it. But on the other hand, maybe it would have. It was a good experiment to do.

Anything else comes to mind about either today or the whole ten?

S: No. Again, I’m anxious to have you re-listen to the confusion about who’s asking and who’s answering these questions, because as you went through it, you passed right over the top of it. I was hearing the oneness lesson. “But what makes you think you’re not making this up” kind of a thing. [laughs] And then you’re asking, “well who said that?” “well, didn’t you say that?” “No, you did.” So I’m very anxious for you to go over it again and see it.

F: Co-incidentally enough, I’m now going to Florida, where I’ll have some time to myself, and I’ve got all this stuff on the computer, so I’ll put it all on one file, and I’m going to try to index it and see if that brings forth anything. I have a feeling it’ll connect things between sessions, and that’ll be nice.

I think also, that I get the feeling that I should wait a while before I do some more. Part of me wants to just say, let’s do this all year round. But I think this is time for punctuation.

F: Yeah, maybe wait til January or even later.

S: Sure, after the Christmas season, springtime coming around–