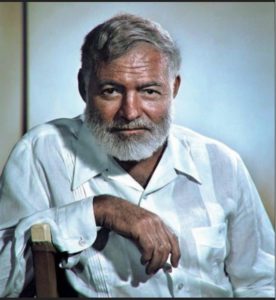 My favorite Hemingway photo. Would have used it on the cover it we could have figured out permissions.

I’d never had a novel announce itself in quite that way.

A long time ago (June 3, 2012), I was driving to my friend Nancy Ford’s house, which was a journey of about half an hour from doorstep to doorstep. Within \that time, suddenly the idea for a novel presented itself in a couple of jumps.

I even knew the title: “Papa’s Trial: Hemingway in the Afterlife.”

The spine of the story is simple enough. After Ernest Hemingway kills himself, he finds himself accused in an afterlife venue, one indictment after another. He is allowed a defense not only of his actions but of his thoughts, feelings and motivations.

The idea came complete with the scenes that would be prologue and epilog. All the rest would have to be figured out, but I knew that this would be only a matter of sitting down and doing the work.

It wasn’t without reason that this happened as I was driving to Nancy’s. For the previous few years, she had closely watched as I had become increasingly involved with Hemingway, reading his books, reading books about his life, talking to him in a series of conversations that I finally turned into a non-fiction book I called Afterlife Conversations with Hemingway. When I told her about the idea that had come to me, I said, “I’ve missed him,” and to my surprise I found myself all choked up, which told me something.

Of course it is one thing to have a great idea, and quite another to turn that idea into reality. So many angles to figure out! So many possible approaches to take! So many promising dead-ends to work my way out of. Does he have a lawyer, or a “friend” such as the British Navy provided accused officers in the 1700s, as described in the Hornblower novels? Would the trial closely resemble trials in the 3D, and if not, how would it differ? Would the charges be general or specific? If specific, would he confront his accusers, many of which would be still in the body? Should I draw up a bill of particulars? The novel would have to build to a climax. What would it be?

I asked, and Papa said, “It wouldn’t have to be the question itself, but what the impact on me was of all the questions, all the answers. The bursting forth from a lesser sense of self to a greater.”

I said, “An emotional climax for Papa?”

“Not necessarily, though that would help. An emotional and mental climax for the reader!”

So then I began the process of writing. I tried this and that, retaining some things, eliminating others, and at a certain point giving up on that draft and beginning again. For a while I included abrasive interaction between the prosecutor and the defense attorney, but ultimately I decided it was disruptive and diversionary, and I took that out. But lots of times, the only way to find out if something would work was tor try it, only to see that indeed it wouldn’t. On the other hand, sometimes it would.

I can’t remember how many full drafts I wrote in the past nine years. Seven, anyway, and innumerable variants of each. Not that I spent all my time writing and re-writing Papa’s Trial. Long months would go by when I would leave it, unable to think how to proceed. But each period of rest would be followed by another period of activity, and I must say, I never enjoyed anything more in my life than the time I spent reliving Papa’s life, sometimes discussing it with him as I went along, creating and recreating confrontations, reconciliations, and sometimes renewed hostilities, as he dealt with the testimony of witness after witness. And because the story takes place in the afterlife, it gave me plenty of opportunity to discuss what our 3D and non-3D life is really all about.

So many tales to tell! So many tales he spent his life telling, retelling, reworking to suit his emotional needs. Some were true, some true but embellished, some false, some false but illustrative. Life in the Midwest, and slices of his life in France, Italy, Spain, Cuba – even several months in China just before we entered World War II. The process of creation, and the politics of getting his creations into print. Love and its endless complications. Fear and “afraid of nothing.” His religious feelings, so little suspected. His breadth of experience, encompassing opera, fiction, painting, sports fishing, hunting, war…

And what a cast of characters! His parents. His four wives. So many famous and not so famous people he knew. (Oddly, the story had no place for his children. I still wonder why it didn’t.)

Quite a story, and of course I couldn’t tell all of it, nor anything like all of it. But what I was able to tell ought to be an education for those whose knowledge of Hemingway is confined to the Hemingway Myth.

Finally, last year life kicked me in the tail when I learned that Ken Burns was going to do a special on Hemingway, so I took another look at it, polished it, shortened parts of it, and finally persuaded Chris Nelson’s SNN Publishing to get the book out. It is set to be published this month. So now we’ll see. I am hoping that at least a few of those who will be intrigued by the Burns/Novick special will be motivated to take a look at Hemingway’s life with an upbeat ending, after the ending we all know about.

As a teaser, here’s how Papa’s Trial begins.

His 62nd birthday was approaching, and he didn’t want to be there to see it. He wasn’t Hemingway anymore, he was a frail old man. The doctors had him at 50 pounds under his fighting weight. He couldn’t fish, couldn’t hunt, couldn’t write. Couldn’t read. Couldn’t fuck or fight or do one damned thing he loved doing. He couldn’t even remember!

This was worth clinging to?

In the early morning he went downstairs, quietly. Mary wouldn’t thank him if he forced her to prevent it again. She had left the keys where he could get them.

He had the shotgun out of the case. He thought of his father, long dead, remembering how bitterly he had criticized the old man, and for how many years. “It took a while, dad,” he thought, “but I finally saw your point. Sometimes there just isn’t any going on.”

He had the shotgun loaded. Where to do it? Somewhere where she couldn’t help seeing it. “Take that, you bitch! You were hand in glove with them, you’ve whittled me down, you’ve got me where you wanted me, at least see the result.”

(Was that fair?  Was it Mary’s fault, really? He pushed aside the whisper of doubt, as he held off any thought of his sons, of anyone he had loved. The Hemingway they had loved was gone. This was just clearing away the debris.)

He pulled the triggers, expecting it to be the end.