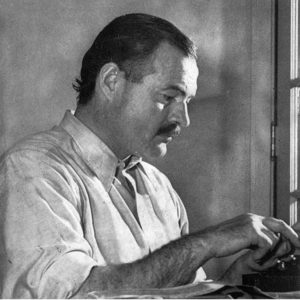 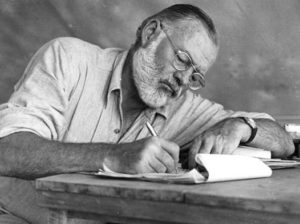 Last night I finished writing the final version of Papa’s Trial: Hemingway in the Afterlife, a novel I have been writing, working on and off, for an incredible seven years.

It was a shock to realize how long ago the initial idea came to me. I knew it had been a few years, but i wouldn’t have thought seven.

A very interesting arrival it was, too, that idea. I was driving to my friend Nancy Ford’s house, a 17-mile drive. Between the time I left my place and the time I arrived at hers, the idea arrived full-blown, I had the beginning scene and the ending scene, I knew the emotional feel I wanted it to have, and I could see how I could get it. It was a download, in a sense. I say it happened during that half-hour drive: I’ll bet it didn’t take longer than five or ten minutes.  Never had anything comparable happen in any other project.

But of course,  many a slip between the cup and the lip, and i worked though version after version,  trying to get it right. I’d work, give up, put it aside, get a better idea, pick it up and try again, time and again over — as I say, unbelievably, seven years. But now I have it, and i have it as i wanted it, or perhaps I should say as it wanted to be.

The premise is simple. Hemingway kills himself in July, 1961, and naturally enough figures that’s going to be the end. He wakes up to find that he is not only still alive (though not in 3D of course), but that before he can continue his eternal life, he must stand trial, giving an accounting of the life he lived, what he made himself. He is on trial because that is more or less what he expected: to be judged. We would call it a past-life review. Well, they say the essence of drama is conflict. No shortage of conflict in Hemingway’s life! Conflict with others, conflict within himself, conflict against fate, almost. So, scene after scene of him crossing swords with ex-wives, for instance, or finding himself with a new perspective on things he thought he had understood.

So today, I spent time emptying four two-inch binders of previous versions and converting it all to scrap paper. Jettisoning notes, etc. no longer needed.  What a sense of liberation, to be rid of it all! It is as if I was carrying it all on my shoulders, all these years, and now i am free. (Of course, that’s one project down, all the rest still to go, but still.) Now comes the task of finding a publisher. But even if i never succeed at that, I have said what I want to say, i have produced a book that would reveal Hemingway to those who know him only by name. I have paid my tribute without, I hope, falling into hero-worship.

Proving once again that anything can be turned to account. I think if I hadn’t been so sick, these past three weeks, I might not have persevered. But, I was and I did, and I’m very glad of it.

8 thoughts on “One more manuscript finished”