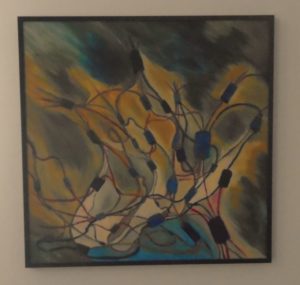 About the photo: Originally the guys said spools instead of rings. This was to show that various “threads” (traits) were shared by different containers, and that, from TGU’s point of view, it was as accurate to say that a given thread connected various spools as vice-versa. Of course, each spool contained not two or three but hundreds of threads, maybe millions. This was merely intended to give the general idea.

6:30 AM. Open for business – if somewhat later than usual. Our spiritual heredity?

The temptation here will be to retreat into cliché or evasive generality, which we suggest is what Rita Warren experienced in questioning people in the black box. But they had only a short time to concentrate; it is natural.

They had about as long as I have in any given day. It’s true, they didn’t come to it day after day. Miss Rita, I get the impression that you are waiting in the wings to help, this heavily raining morning. [Pause] Or maybe not. Not sure I can really feel your presence. Well, anyway —

There is a logic behind your existence in any particular body at any particular time-and-place. Now listen carefully to that statement. The logic changes according to the time, according to the place. That’s why you change locations or change occupations or change pre-occupations. You live many lives within any given life – as child, as adolescent, as young relatively irresponsible adult, as functioning social unit primarily driven by the needs and motivations of the larger society around you, as older person with a longer perspective, as – perhaps, elder, either known for wisdom or ignored as irrelevant. All this is familiar to you from a social viewpoint. Now think of it from an internal or spiritual viewpoint.

You live many lives within each life. Why is that? How is that?

Of course you will see that part of the answer is that your person-group expresses different constituent parts in different circumstances – including the chronologically-biologically determined circumstances you think of as different stages of life. It should be easily comprehensible that throughout your lifetime you are necessarily different persons. That is, different aspects manifest in turn, and not necessarily once and then not again. You have heard of terms like “arrested development” or “reversion to an earlier form” but may not have considered them in this context.

Okay, big jump but I see it. Our common thread here is not so much the body (except at any given moment) but the mind, the consciousness, that somehow has both the moment-to-moment consciousness (and ignorance) and the overview of the life. And you’re saying, in a larger self we are beings – well, you say it.

Nice jump. Yes. As above, so below, because each level is the same scheme, the same pattern, as the level below or above, and so understanding one’s own level is the way to understand all other levels. And after all, how else could you (could the ancients, could the wisdom-keepers) obtain first-hand knowledge of other levels of being? (This doesn’t mean that everything that is experienced is understood in the same way; it does mean, though, that it is the same thing being experienced. Thus, with sufficient insight, one can examine any testimony, correct for its bias, and see the same thing as it appeared from a different viewpoint.)

Bias – I well remember Rita explaining to me – means not unfair prejudice, but inherent inclination. One’s bias in any given matter is how one is most inclined to see it, the easy road, the conclusion one would tend to jump to as opposed to the conclusion one must be prodded toward.

And notice, in mid-explanation you might be said to have “forgotten” whether it was “you” or “us” speaking.

I did notice. The veil keeps getting thinner, doesn’t it?

Or, your awareness of a process that functions continually is becoming more acute.

Well, that’s good. And to continue? (Or do you expect me to do it?)

Yes, a joke, but less of a joke than you might think. As it is not your definition of “you” who speaks, so it is not necessarily your definition of “you” who reads, or hears. Our awareness is your awareness, it’s just that the identity is not obvious to you in your daily lives except occasionally – until you really get it, at which time you truly realize that it has been all along as seemed too good to be true – you are traveling gods in disguise, as Henry Thoreau once put it. Yet it is also a most matter-of-fact piece of news, just as he was very matter-of-fact.

Now, since you have jumped to the way that makes more sense of things, let us look at it a little closely. Again, the easiest way, the richest way, the most fully textured way that will include emotion as well as logic, is to examine this in split-focus, looking carefully at the life you know well, in order to intuit by extrapolation the life you do not know so well.

In any given life, there are stages of growth, times of decay, sudden discontinuities, bewildering crosscurrents. There are strong influences from others, pleasant or unpleasant or alternatingly pleasant and unpleasant or combined intense pleasant-unpleasant flavors. You have intellectual “abstract” interests, artistic “aesthetic” appreciations, strong and weak emotions, satisfactions that are not easily classified. You learn skills, you endure hardships, you – in short – experience life.

Now, what happens during this experiencing of life? One scheme – our scheme – consists of person-groups cohabiting a bodily locus and so experiencing a day-by-day identification with each other, strong or weak or unwilling or unaware, just as you do with external society and for the same reason, because the nature of “inside” and “outside” is the same.

So, at one stage of life any given combination of traits may be – activated, let’s call it. Evoked. Exercised. Experienced. Relied upon. Developed. At another stage, another combination takes the stage (so to speak) and this combination may have little or no or much or conceivably even almost entire continuity with the previous combination, hence “you” change to meet new circumstances. If you were describing just the same process, but were considering it in terms of “reincarnation” as it is called, can you see that it’s the same process?

We’ll hammer that home a little, though it will be evident to some.

Your “higher self” and your mind are not exactly the same thing seen in different contexts. Your mind, your mental world, is non-physical, yes. But just because your higher self is also non-physical does not mean it is the same as your mind, any more than the fact that your physical body is physical means is indistinguishable from a chicken.

I get what you’re saying; it is conceptually clear to me, but just like your rings-and-threads analogy, I can see that more words are only going to confuse the issue if we can’t pass on the understanding, right-brain to right-brain.

So send out the picture we had you paint for Rita at that time. It will serve as well to illustrate the same concept at a higher level as it did at a lower level.

That’s an interesting thought. And the fact that the same sketch serves for both reinforces your point.

Yes. Care to provide the commentary?

Any advantage to my doing it, as opposed to your doing it?

Communication with the other side need not be expensive and difficult now – our new fiber-optic system combined with satellite uplinks puts it a range of everybody’s budget. Now it’s a matter of your ingrained attitudes being updated to adjust to the new reality.

All right. I’ll provide the commentary here when I find the JPEG to send with this.

One thought on “Rings and threads”