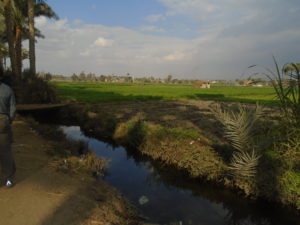 On our first day in Egypt — between pyramids, so to speak — our group stopped at a little farm called the Blue Lotus, and as we walked around it after lunch, my father’s presence was strongly with me. Dad was a farmer too, 70 when he died, two years younger than I am as I view this old, old country. In the red land, I can feel him appreciating the sheer expanse of sky and rock and sand. In the black land, he is around me as well as within me, for so much of Egypt reminds me of his farm, and his way of being.

Even in Cairo streets, I see reminders of another way of life, a sort of patchwork coping: 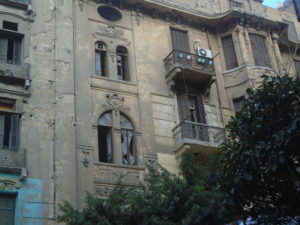 I have no criticism to make of any of it. Far from it: It is an appropriate strategy for a labor-rich and capital-poor country . I saw the same thing in Peru, 20 years ago. The same mixture of modern and traditional, the same patchwork approach to change, the same make-do method of fitting means to desired ends. It’s all very familiar. It’s one part of the world that I grew up in. It’s what farming was, back in my father’s and his father’s day. 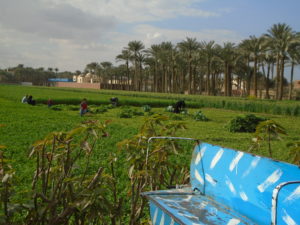 The Blue Lotus is a sort of oasis of the past. The owner, who is half-Austrian, returned from years in Europe to live out his life on this little plot of land, hoping to reverse the tide by his personal example, I suppose, fighting despite a sense of helplessness. I talked to him as we walked around the little plot. The eye told one story, the brain, alas, another.

The eye saw the startling, exhilarating productivity of the black lands. The rows of planted palm trees. The endless onion plants, growing cheek by jowl in the absence of rows (no land to waste!), the oversized cabbages, the sheer expanse of bright, vivid green. The carefully husbanded manure piles.

But the brain saw, and conversation with the farmer confirmed, another, darker story. This three-crops-per-year climate is in a prolonged state of slowly declining fertility, and nobody knows how to reverse the decline. It has been half a century since the Aswan High Dam ended the annual overflow of the Nile. It has been something like 12 decades since the low dam that preceded it began the process. No flooding, no overflow, no deposit of fertile silt. The black land’s soil fertility is experiencing just what happens to anything that is continually drawn upon and never renewed. Farmers are trying to maintain fertility by using chemical fertilizers, but that is not going to work, as farmers throughout the world are learning by sad and irreversible experience. 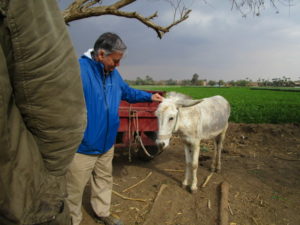 One of the sweet, undersized donkeys (on the right)

After our visit, I thought about that farm from time to time, and my mind kept coming back to the donkey in the treadmill. Yes, they actually had an undersized donkey, earning his keep by spending his days walking around and around in a circle, pulling a rotating bar that pumped water from the nearby canal to the fields. He walked blindfolded, either to prevent him from getting dizzy from the endless circlings, or to prevent despair that all that walking didn’t get him anywhere. He made a decent metaphor, I thought, not just for Egyptian agriculture but all the world’s agriculture, treading the same blind circular path: Fertility depletion, chemical additives, depletion of trace minerals, further declines, etc., etc. In the process, we are creating desert, doing it in slow motion. Not just the Egyptians, certainly not just poor countries, but countries blessed with some of the richest soil God ever gave as a legacy. When you finish destroying your farmland, whether you do it in low-tech or high-tech fashion, then what do you do?

Egypt thinks in dualities: red land, black land. Desert land, arable land. Egypt survived and flourished for thousands of years — thousands, not America’s paltry 500 — by maintaining a balance. But Gurdjieff pointed out that life in duality always involves a positive, a negative, and a third, reconciling, force. Where was it?

It wasn’t until nearly our last day, three hours and more into the Sahara, less than 20 miles from the Sudan, that I saw the first hopeful sign of the presence of that reconciling force, the first promise that Egypt’s future is more hopeful than endless turns around the same treadmill.