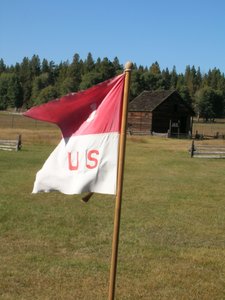 Saturday Sept. 24, 2005. If we could have found the road we were looking for, we wouldn’t be stopping at this little park in the middle of nowhere. You know how it is. You’re traveling and you have your mind set in one direction, and anything you pass looks less interesting than the thing you think you’re chasing.

We are on our way to Bend from Crater Lake, and although Bend is to the northeast, we will have to travel southwest down highway 62 in order to pick up 97 for the long trek back north. The map seems to show a small road that will cut off some of the long dogleg, but even though we look carefully, the only road that cuts away seems to be headed in the wrong direction. Okay, we figure that we must have passed it somehow. Next step: Find somebody and ask. The little sign by the small white building says Fort Klamath.

I go inside to find a mildly pot-bellied man (rather like me) in a Union cavalry uniform – though the blouse didn’t seem to match the pants – talking to a couple who apparently were something between locals and tourists. I wait a respectful moment, ask my question, get my answer, and leave with some regret that I can’t stay and look around.

Saved by the kids! I get back outside to find that Ben is engaged in something or other and Karis is engrossed in something else, and their parents are watching them, and we are going to be here for a while. (Don’t tell me there’s no God!) I go back in and muse among the exhibits.

After a while the other couple goes away, and the curator and I get involved in discussing how six-shooters work, because I ask him what this thing is that looks like a powder horn. Turns out, it is a powder flask, designed to measure out exactly 38 grains of powder at a time. I had always assumed that six-shooters simply loaded cartridges, as in the movies, but he shows me how they loaded when they didn’t have pre-made cartridges. They would use the flask to measure out the powder, pour it into the front of one of the cylinders, and follow it with the ball and some grease which hopefully would prevent stray sparks from igniting other cartridges at the same time and blowing the front of the pistol all to hell.

It is all very interesting. He clearly knows a lot about guns, and a lot about history, and he is friendly, and maybe lonely, and he likes to talk. His great-grandfather had fought in the war, he said, enlisting from Missouri. I thought that meant his great-grandfather had been a Federal, but no, he was a Confederate. I say, “Well, I’mÂ glad you made it to the right side.” He sort of snorts. “Oh,” he said, “if my grandfather could see me, he’d be turning in his grave.” We spend some time talking about this and that until it is time for me to see if my friends are ready to push on.

The fort was constructed – so the sign said – to promote peace between the settlers and the Indians, and perhaps that is the way the settlers saw it, though I doubt the Indians saw it the same way. It was built, manned, and abandoned, all in a comparatively few years, never participating in hostile action of any kind, a pretty good fate for a fort, I suppose. Now it sits, still in the middle of nowhere, with little to be seen save with the imagination. Those times are gone, and so are the barracks, and the officers’ quarters, and the corrals. All that’s left is a sort of bookmark to a tiny bit of history, manned by a lonely sentinel who dresses in the uniform of his great-grandfather’s enemies, and talks of times long departed.