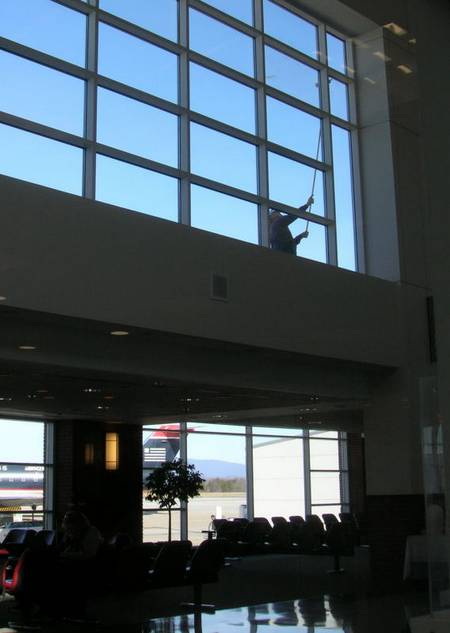 I was sitting in the coffee shop at the Charlottesville airport, waiting for a plane, of course, and happened to notice the man washing the windows, so far above ground level. I took the photo because it seemed the kind of shot that might prove to be a striking visual. But the longer I look at it, the more it seems to me a symbol of a larger truth.

There he was, working quietly, mostly out of sight, unnoticed and not expecting to be noticed. He isn’t likely to be mentioned on the nightly news, and his work isn’t likely to make him rich, or get him nominated for office, or even get him sent on a book tour any time soon. If he does the job well, it’s probably partly to stay out of trouble and partly — one hopes mostly — for the satisfaction of having done a good job.

And that’s the way the world’s work gets done.

Okay, so maybe it isn’t a cosmic insight. It’s true, regardless. You know the old saying, there are show horses and work horses. Here’s a silent toast to the work horses who keep our world going.