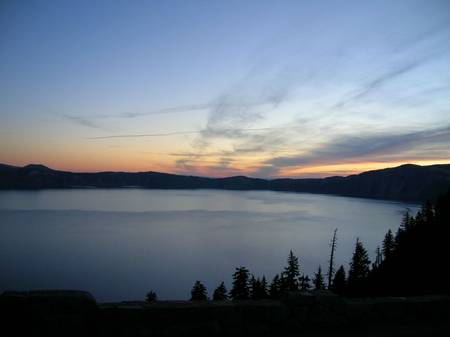 Mr friend Michael and I arrived at Crater Lake at mid-morning, coming in from the north, down the Rim Road that skirts the western edge of the crater. I pulled in to the first turnout, anxious to connect with the energy of what I knew had to be a sacred spot – one of the sacred places of the earth. The earth has no shortage of power spots, but you don’t everyday come across a place, like this drowned volcano crater, so intimately connected with fire and water both.

A couple of months before, in a workshop on connecting with non-physical beings, I had interacted with a non-human life-form which, I cam to realize, was the energy behind a sacred spot. It was a sort of transparent doorway connecting our physical realm with a portion of the non-physical realm. Until then, it had never occurred to me that sacred-spot energy might be intelligent and conscious; I suppose I had thought of it as a sort of automatic by-product of geographical and other forces. But it became clear that this “energy” was in fact a conscious non-human, non-material, being. I don’t know whether it is aware of us, as individuals, at all. It may be that it expresses itself in stitching together the two realms and has no interests or perceptions beyond that. But if it is aware of us, ever, I strongly suspect that this is only when we are in altered states, just as we ourselves are unaware of other dimensions when we are in ordinary consciousness.

Standing as close to the edge as I could, I looked out and down, as the rim road is at a level far above the surface of the lake, and the lake surface is extensive – four miles in one direction, six in another. I wanted to connect with it, not just gaze at it. I closed my eyes and moved my energy, feeling my connection to the earth – and was staggered by what seemed almost a physical impact. The place has presence! Standing in a somewhat altered state, I felt it, and felt instantly more alive, more joyous, as if someone had turned up my rheostat.

We improvised a little ceremony, Michael and I, to formally connect. Michael’s mind runs with Inca ways of doing things, so he called in the four directions, and the sky and earth, and a whole list of spirit and material presences. The net effect for me was to bring into consciousness, front and center, the many spiritual and physical connections that bind us all one to another, and each to all. To his ceremony I added a pledge to do the work, and a request for the assistance of unseen powers.

Then we were two tourists, standing there drinking in the deep blue of the waters, and the lighter blue of the unclouded sky, separated and joined by the long thin line of crater rock that extended as far as we could see around the horizon. Before us was the miniature volcanic cone that is Wizard’s Island. Around us on all sides was an unbroken silence and an exhilarating taste and smell of air like cider. No people or animals were to be seen, and yet the area was somehow filled with the invisible life that is the earth; that underpins the earth.

All that Tuesday in September we spent by the side of Crater Lake, sitting or hiking, exploring exhibits and gift shops or eating lunch. Once we lay on the stone walls, dozing in the sun. Sometimes we talked and sometimes we wandered in our own worlds.

After a late supper indoors as the day faded, we went outside and made our way in the rapidly strengthening darkness along the disappearing pathway that followed the edge of land that followed the distant shoreline below. We came to an end of pavement, and an end of daylight, and the time and the place were right. We improvised another ceremony expressing our thanks for the day and offering our hopes and fears and our resolution to remain conscious in the time to come.

In enacting these little ceremonies, we were not acting as pretend-Indians. Rather, we were continuing to tread our Pathless Path, making it up as we go along, using ceremony as a way to be more present – for western man lives with too few ceremonies, too few acknowledgements of the importance of a given moment. We live, generally, very unconscious and slipshod lives. These days Michael and I, and so many people we both know, are feeling the need to be ever more present. Our days are shadowed by coming events – or so we feel – and sometimes the shadows are overwhelming, leaving me feeling helpless, disconnected, and alone. It is good to remember how many presences connect us. It is good to remember that we have a place, and that we are needed, and that this is the time we came here for.