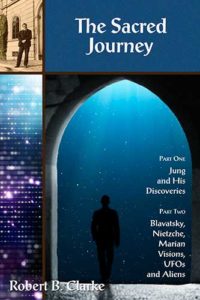 The Sacred Journey is in two parts. Part one presents a remarkable treatise on Jung and his discoveries and what they mean to the world—particularly the West. Part two is divided among several elements: Mme. Blavatsky, Frederick Nietzsche, Marian visions, UFOs, and aliens. What holds the book together is that all of these elements in their own way further develop the theme of the interconnection of history (culture, civilization, etc.) and the processes and manifestations of the unconscious as experienced by individuals. The result is a stimulating re-visioning of what has been going on around us for the pats hundred years—and an equally stimulating suggestion as to what lies ahead.