With Ed Carter’s birthday nearly over, I happen across a poem I wrote about him years ago. I don’t know how much this will mean to you, if you have not read Living is Forever.

followed by a long rising.

his life for his country,

April 3, 2014, is the 99th birthday of my old friend Ed Carter — J. Edwin Carter — author of Living is Forever and then an investor in Hampton Roads. Ed was a long-time friend of Bob Monroe, and whetted my interest in doing a Gateway even more than it was already. In 1995, Ed paid for me to do the Lifeline program with him because, he said, he thought we’d both get a lot out of it if we did it together. Typically generous of him. And, indeed, we did both get a lot out of it. 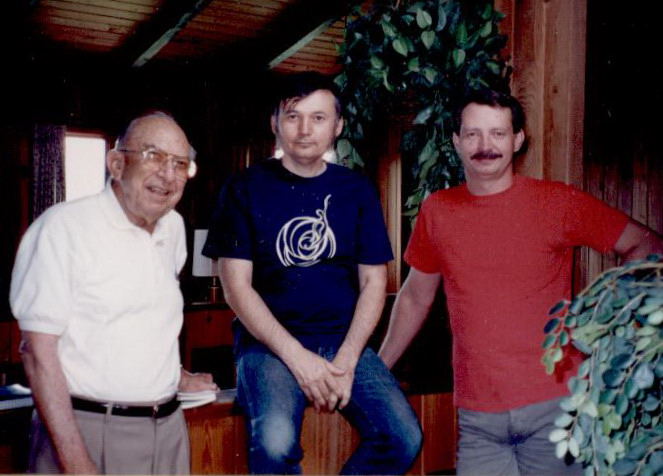 Here is a picture of a rather younger Frank DeMarco  with his friends Ed Carter and Richard Spees, taken by our dear friend Joyce Johnson-Jones during Lifeline, July 1995.

Ed moved on in December, 1996. Rich and I have remained friends for going on 20 years now.

My May column for The Meta Arts magazine, entitled “This Change May Now Be Close At Hand,” may be found at  http://www.themetaarts.com/pages/frankdemarco.html

4:30 AM. Finished making notes, and noting themes, through January 2006. Tremendous amount of work to do yet.

I have two alternate questions, but am open to suggestion.

The question from Jim and Carol is a good one to address.