The Sphere and the Hologram 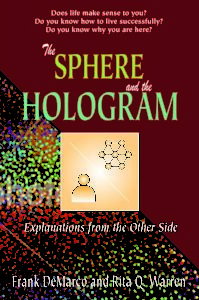 In August, 2001, Rita Warren and I began a series of weekly sessions in which she would ask questions and I, in an altered state, would bring though answers from what we call the guys upstairs.

Rita as it happened, was a distinguished emeritus professor of criminal justice who had taken early retirement following a series of transformative experiences at a Gateway program hosted by Bob Monroe. She and her husband had built a house on land adjacent to the Monroe Institute, and for four years she and he had run Monroeâs laboratory, working as volunteers. So, she had professional training in psychology, she had decades of experience as a teacher, she had conducted hundreds of altered-state sessions for others.

Most important of all, she had over the years compiled a list of questions about the nature of things, questions for which she had never been able to acquire satisfactory answers from any of the people for whom she had conducted sessions. We set out to see if my guys could give her better answers than she had gotten to that point.

They did, and in 22 sessions (including a session on the night of Sept. 11, 2001) they provided information that changed her view of life and mine.

We taped each session, and over the next day or so I laboriously typed up each one. Here are those transcripts, supplemented by sketches that I find often make the concepts easier to comprehend. We are hoping to provide audio downloads sometime in the future, when and if we work out the difficulties involved. Meanwhile, these should prove to be of value.

On the back cover:

The Sphere and the Hologram

Does your life make sense to you?

Do you in your heart believe that your life matters to anyone or anything beyond this world?

If you believe in an afterlife, can you imagine what it is like?

If you have experienced parts of yourself beyond your everyday waking consciousness, do you understand their relationship to the rest of you?

Can you make sense of mankindâs religious traditions, without jettisoning your intellectual and critical functioning?

Now, supposing that you could talk to someone on the other side of the veil between physical and nonphysical existence, what would you ask? Or, suppose that you could listen in, while someone else did soâ¦.

The Sphere And The Hologram lets you listen in.

The physical end of the collaboration involved two people:

Rita Warren was a Ph.D. professor of psychology who, after her retirement, spent four years directing The Monroe Instituteâs laboratory, helping volunteers to achieve and explore altered mental states under controlled conditions.

Frank DeMarco was, and is, an author, a former journalist and an editor with the Hampton Roads Publishing Co., Inc., who had learned to bring forth messages from the other side.

The nonphysical end involved what DeMarco calls âthe guys upstairs,â a group whose composition changes from time to time, depending upon subject matter and other variables.

Together, in the summer of 2001, they began a series of weekly sessions in which DeMarco entered an altered state and Warren asked questions that had interested her for years, questions for which the volunteers she had quizzed had been unable to provide satisfactory answers. What is the nature and purpose of life? Is there a God? Is there an afterlife, and if so, what is it like? What is the truth behind crop circles, UFOs, etc? In short, how does the world function?

As it turned out, the guys upstairs were more than willing to share what they know. Using a combination of explanation, analogy, pointed questions, jokes, thought experiments, etc., they set out to answer anything that could be asked. This fascinating series of conversations may help you change your life.