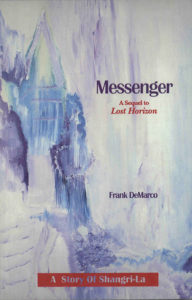 Suppose you were given a chance to live for hundreds of years, in full physical strength and mental vigor–provided that you lived in a tiny community totally isolated from the rest of the world. And suppose that you were told that if you stayed you would be shown how to develop remarkable mental and spiritual powers that would lift you far above ordinary life. Would you trade ordinary life with your friends and family for the chance of something vastly more?

And suppose that instead of having a choice, you found yourself placed in that community through circumstances beyond your control. Would you accept that life, or would you try to escape?

This is the premise behind my novel Messenger. Building on the legend of Shangri-la that English writer James Hilton brought to life inn his 1932 novel Paradise Lost, I set out to see if I could imagine a way for the lamasery to survive the Red Chinese occupation of Tibet that began in 1950.

The lamasery, hidden away in the far mountains, might survive â but only if the Chinese never discovered it, which meant only if it never called attention to itself. So when, in 1962, a young American airman named George Chiari crashes his U-2 spyplane in the near vicinity, he is brought into the community, and all traces of the airplane removed. They cannot let him go, lest he be captured by the Chinese and forced to reveal their existence. But what of his life in the outside world?

I wrote this book originally in 1979, then re-wrote it repeatedly until it was published in 1994. Although it won an award as best New Age novel, an altercation with the James Hilton estate led to Hampton Roads signing an agreement that the book would never be reprinted.

The copies that I have for sale here are all that are left of the original printing, Unless the Hilton estate can be someday persuaded to change its collective mind, these copies are all there ever will be. If you would like to purchase a copy of Messenger, please use the Contact Form to contact me.