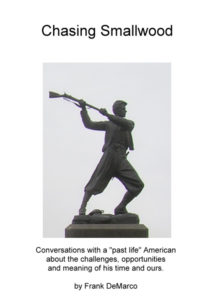 In December, 2005, I began several months of regular altered-state “conversations” with a man named Joseph Smallwood, who had lived in 19th century America, had  gone west to Oregon in the 1840s, had lived with the Indians in Minnesota, and had fought as a Union officer in the Civil War. At least, thatâs the story.

How to communicate with the dead. You can learn to move between normal consciousness and an altered state (which is not trance channeling, nor automatic writing, nor self-hypnosis) in which you allow someone else to form the words. The process is worth learning, and you can learn it yourself if you care to. I have been doing this since 1989, arguing all the way. Fortunately, it isn’t necessary to know ahead of time what you are doing or how it works. How to bring it through and not choke it off is the hardest thing you need to learn.

Now, common sense says that we cannot talk to the dead, nor they to us. But although we think of the dead as gone, their souls remain alive outside of time and space. Being outside of time and space, all times and all spaces are available to them. Thus, when we communicate with them, they interact with our minds âfrom the insideâ so to speak, knowing what we know and reacting to that knowledge. Thus we can communicate with them about the things in our life, and why we can get the benefit of viewpoints formed in very different space and time environments.

The life of a particular 19th-century American— Joseph Smallwoodâs life and opinions, centering on his life in the West and his experiences as a Union officer during the Civil War. My story of Josephâs life may quite possibly be a mixture of fact, distorted fact, and unconscious invention. Yet â Joseph Smallwood is there, and you will see for yourself that he has a lot to offer. I had to learn to judge the material on its own terms, rather than looking for external validation. Does it resonate? Is it helpful? Does it lead to new understandings?

The physical world’s place in the scheme of things. Those on the other side have made it clear that we do impacts them. That thought is startling, perhaps, but the worldâs spiritual traditions have always insisted that we do in material reality matters to the non-physical world. I donât know if they care about our social arrangements. Theyâre after larger fish. The spiritual crisis of our time, theyâve said, centers on the death of materialism and the struggle over what is going to replace it. And that bring us to

The massive task facing us today. A society whose âstoryâ is contradictory wracks itself to pieces, as we see around us. Our sciences are essentially materialist at core; our religions are essentially dogmatic; our arts recognize no responsibility to express the deepest truths they find, nor do they have any firm basis for expressing what they perceive. They all head in different directions, which means that our society is built upon sand. You cannot build upon rock while your story tells you â at the same time! â that either there is no rock, or that we are already upon rock, or that we cannot yet tell whether rock exists, or that it is a matter for personal opinion whether rock exists or not. We can only get beyond this chaos by searching for the truth and finding it. Chasing Smallwood shows you one way to do that exploring.

Available direct from Frank DeMarco. Please use our Contact Form.