Egypt, as I said in a previous post, thinks in terms of dualities. Upper Egypt, Lower Egypt. Papyrus or Lotus. Cobra or vulture. And mostly, Red Land and Black Land. Red Land refers to desert. Black Land means fertile, arable soil, once the land annually inundated by the overflow of the Nile.

While we were in Cairo having lunch at a local farmer’s, I talked with him about the declining fertility of the soil, and the slow subsidence of the land down at the delta, along with the gradual incursion of salt from the Mediterranean. It was worrisome. The coming of the Aswan Dam had ended the Nile’s persistent refreshment of the land. What would replace it? Chemical fertilizers aren’t going to do it, though they may slow the decline. It wasn’t until nearly our last day in Egypt that I saw solid reason for hope for Egypt’s future. 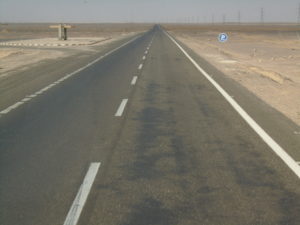 On the last day of February, our group of 15 took a 50-passenger bus three hours and more from Aswan into the Sahara Desert ultimately to the temples of Abu Simbel. That’s a lot of desert, and there’s plenty more ahead: 3,000 miles worth, all the way to the Atlantic. The sheer expanse of Egypt’s Red Land is daunting. With the Black Land slowly losing its fertility, and Egypt’s population continuing to increase, where was there a future for this old, old country?

You looked out one way, to the north, and you saw the accompanying power lines that marched along with the road. Look out the other way, to the south, and you saw — what? I told people it reminded me of what the Aussies call GABA — the Great Australian Bugger-All. Deserts have their beauty, but they aren’t exactly inviting. 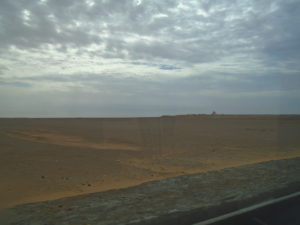 But then things changed. At a certain point, we saw that the government has been industriously, methodically, planting palm trees and other forms of vegetation, using water from nearby Lake Nasser (the Nile that was drowned by the High Dam) to do the irrigating. Better, it was apparently raising silt from the bottom of Lake Nasser and creating farmland. 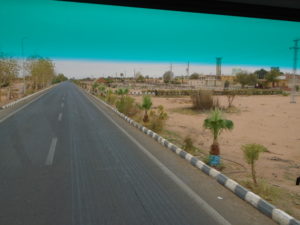 I was told that it was also importing families of farmers from the delta to farm the new land, thus attacking two problems at once: overpopulation and underemployment in the North, and a need for farmers for the new land being created in the South. What a wonderfully hopeful approach!

It reminded me of the kinds of projects my own country used to undertake, like TVA dams and the Interstate Highway System, and the creation of the industries associated with the Space Race, before people lost faith in the ability of governments to make constructive differences in our lives. Fortunately for the Egyptians, they apparently still have hope that their government can accomplish things. 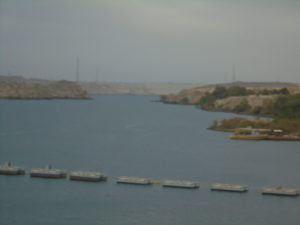 And what makes it possible

And here is a photo of what I think is the largest manmade lake in the world, the water that may prove to be Egypt’s salvation. If the project succeeds, by rights Egypt will no longer be a duality, Red Land, Black Land. It will have added a third, call it Green Land, turning desert into farms and communities, creating a future.