On the one hand, it is true that, wherever you go, there you are. On the other hand, maybe not. It depends upon which “you” we’re talking about.

Physically, sure, you are where you are. But that doesn’t mean you’re all there in the same place and time, especially in the age of jet travel and electronic fragmentation (also known as staying in touch, also known as cell-phone hypnosis). What sense does it make to travel 6,000 miles and leave part of yourself elsewhere? Yet, it’s easier to do that than to realize you’re doing it.

I went to Egypt ostensibly in response to Ruth Shilling’s suggestion that I do so. But really, I went because something within me said, “Yes, and it’s the right time,” and subsequently proceeded to calmly demolish each internal and external objection as it arose. I can take a hint. I went. But did I go just to see the scenery? I did not. What I went for, though, is not so easily explained.

Like many people, I have lived most of my life fascinated by Egypt, intrigued by its past, and feeling somehow connected to it. One of the disembodied presences I have held communication with, these past 14 years, I call Joseph the Egyptian. I know his internal life, or fancy I do, but I know practically nothing about his external life except that he was almost definitely a priest of some sort. Until I went to Egypt, I assumed he was from earliest times, perhaps pre-Pharonic times. Now I feel confident he was New Kingdom sometime, because that was almost the only era I was interested in. Of course, New Kingdom covers quite a bit of time! But it’s closer to definite than I was previously.

But did I go to Egypt to converse, or imagine I could converse, with a man from long ago? I did not, and in fact I was wary of making any such attempt, well aware that it would be easy to fantasize something and thereby lose a real connection. Instead, I set out to remain open to whatever came, without attempting to add content or suppress content. A difficult bicycle to ride, sometimes. 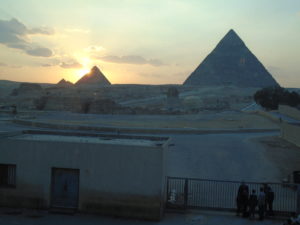 Not a bad backdrop for lunch, eh?

Photos really don’t give you a sense of how close the pyramids and the sphinx are to the city. But our hotel looked right out at the great pyramid. This restaurant where we had lunch offered this view from the table we were sitting at. Hard to get much closer than that. 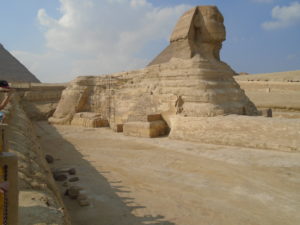 You can’t really tell it from this photo (and my camera battery ran out about here, so no more pix till I could recharge it overnight), but there is scaffolding in front of the rear legs of the statue. The authorities appear to be smoothing the surface by something like plastering (though I doubt it is that simple). The plus side of that is that it should give tourists a better idea of how the sphinx was supposed to look. The minus said is that it will remove evidences of weathering by water, though perhaps that doesn’t matter, in that the phenomenon has been well documented by this point.

By the way, after Emerson visited Egypt as an old man of 69 in 1872, someone at home who presumably found his works incomprehensible joked that the Sphinx said to Emerson, “You’re another.” 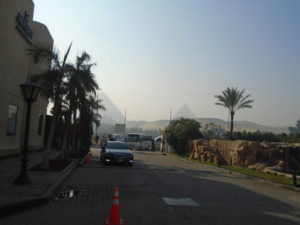 I liked Egypt (though Cairo least, in that I am no fan of large cities). I so recognized, from my youth in another century, that patchwork effect that results from improvements being made here and there, as money and time allowed. It seems inefficient, but it isn’t, really. It is the proper application of energies in a situation in which you always have a quart’s worth of work to do, and a pint’s worth of time and materials to do it with. It is life on a very human scale. 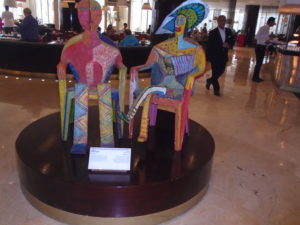 And, just to move from the sublime to the ridiculous (except, I rather like it), this piece of sculpture was on display in our hotel lobby, a reminder that life goes on in all directions, and that some of the weirdest travels take place (apparently) between the ears.