As we climbed into the small not-quite shoulder high wicker basket, anchored by a strap to a truck, lest we accidentally begin to proceed sideways, I had to time to think, “This may be the stupidest thing I have ever done.” (And that’s some competitive bar to pass!) Nonetheless, in I went with the others.

We weren’t the first balloon to get up and out. As we got to the field, the first hot air balloons were already ascending toward the moon. Ghostly. Unworldly. 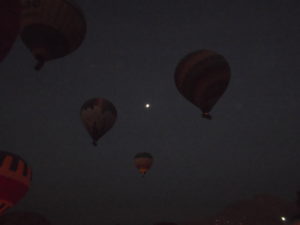 Crowded little space, holding about half a dozen people on either side of the center box which held the pilot in his solitary (if constricted) splendor. Wicker, so, creaky and presumably flammable, and here was a guy deploying a gas jet that, as you can see below, shot out several feet. 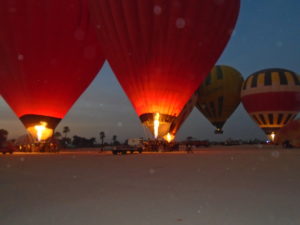 All told there were, by my rough count, 21 balloons on the field, all of them hurrying to make the most of the calm, still, early morning air. Not the sort of thing you see every day. 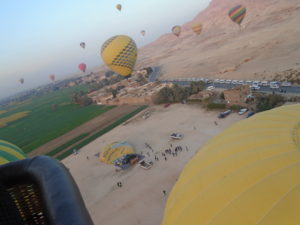 We were a little late getting off, but not much. It was scarcely dawn and we were already in the air. You can’t quite see the Nile here, but anyway we’re looking east, unless the sun was VERY confused. 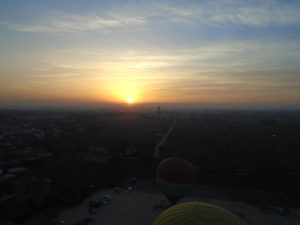 Dawn from the air 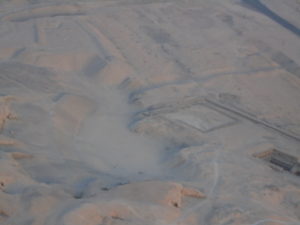 We weren’t up all that long. An hour, maybe. Our pilot brought us high, higher than the others, showing us the Valley of the Kings and the Valley of the Queens at the same time, which requires some altitude! (It was only after we were safely on ground again that he told us he was used to much bigger balloons, and wasn’t all that familiar with the controls on our little vessel. I thanked him for not telling us earlier.) 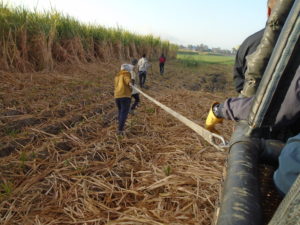 Landing mechanism is ingenious and simple. He lands, he is met by a ground crew that links the carriage to a tow rope, and they pull it (he keeping it still inflated and thus friction-free) until they get to a place where they are ready to take it down. He slowly deflates the balloon and as the lower end deflates, the ground crew gathers it up and flemishes it (at least, if it were sheets on a ship, that’s what they would be doing): they fold it neatly so that at the end the balloon itself is like a serpentine rope, ready to be stowed on a truck. Then it’s back to the everyday world. 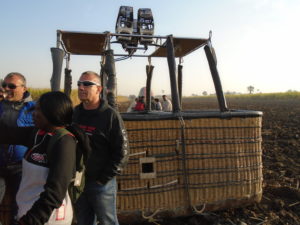 Back on the ground again.

As it turned out, NOT the stupidest thing I’ve ever done. One of my better moves, actually. Flying the way flying ought to be and rarely is: Silent, serene, open-air, slow-motion. (Slow cabin service, though. Still waiting for someone to offer coffee.) A nice start to another day.