As I said in an earlier post, on Tuesday night we 15 people had the entire pyramid to ourselves from 7 to 9 p.m. What a privilege! 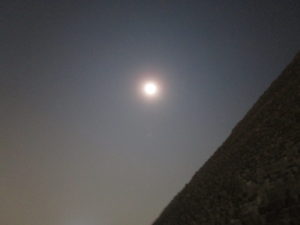 I was watching my energy level carefully, and didn’t know if I had enough to visit all three chambers (what they call The Pit, the Queen’s Chamber, and the King’s Chamber), so I opted to visit only the latter. Those of you who are familiar with the internal layout of the pyramid will recognize this shot of the Grand Gallery. All of it isn’t all this high: Parts of it require that you advance bent forward. It’s no place for the claustrophobic. 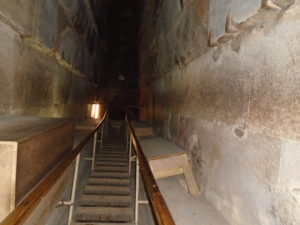 A long hard climb, sometimes under a very low ceiling

But when you have mounted so many steps, and have made your way through a couple of quite constricted passages, when you enter, you see only an empty room, other than what they call a sarcophagus, and modern lighting and ventilation equipment. Like this: 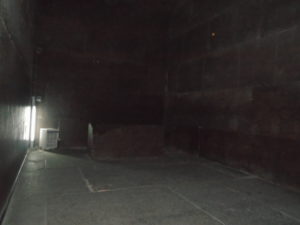 What they call The King’s Chamber, empty to the eye

Similarly, you look into the sarcophagus, which is big enough to lie down in, and there is nothing to be seen. But is what can be seen by the eye all there is? I don’t think so! 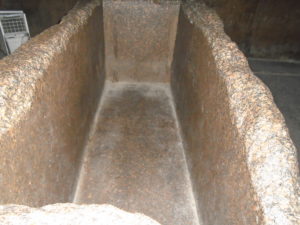 What they call the Sarcophagus, empty to the eye.

So, if what you see is not what you get, what’s going on?

I’m pretty sure we are seeing the empty stage after the show has closed. That is, I am convinced that the King’s Chamber was a place of psychic initiation, which of course would involve the creation and maintenance of astral thought forms. So what the priests and the candidates saw (with their non-physical knowing, so to speak) was not cold stone forming an empty cube, but – whatever the priests created for those rituals. Naturally, the thought-forms would have been deconstructed at the end of each ceremony. We can hardly expect to see the scene as it presented itself to priests and candidates: We were never supposed to.

We interlopers from the 21st century stood or sat or lay in what seemed an empty chamber, and for quite a while, by prearrangement, we lay in total darkness and silence, and what we made of it was probably different for every person there. An experience to remember, in any case.

3 thoughts on “The Great Pyramid by night”