Who goes to Egypt without seeing the Pyramids? But there’s seeing, and seeing. When Ruth and Ehab bring us to the pyramids and temples, they give us time to experience them, not merely to glance at them, check them off our mental list, and move along. So our interaction is different from that obtained by people on what my brother calls Tourist Time.

On our first day, we went to Dashur, where few tourists go. On Tuesday, we’re ready for Giza, where everybody goes. This morning’s exercise is to see what everybody sees. We’ll look around, go into the second pyramid, and come out to do other things, knowing that tonight we’re going to have the Great Pyramid to ourselves — just our 12 tourists and three guides — for two hours. Are we looking forward to it? You guess. 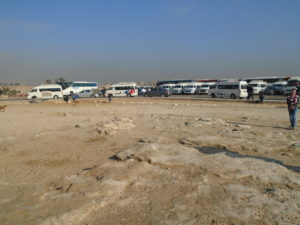 You see photos of the pyramids, but it’s hard to put them into perspective. A pile of stone without a yardstick is just a pile of stone to the eye, no matter what the mind knows. So, you hear that the great pyramid extends over 15 acres (roughly 7 hectares, I think), but what does that mean? The scale is too big; there’s nothing to compare it to. How easy is it even to envision 15 acres? Here’s an easier way: Look at the size of the people and the size of the blocks, and try to remember that the great pyramid is said to contain two million such blocks. And try to absorb the fact that we couldn’t do anything like it today. 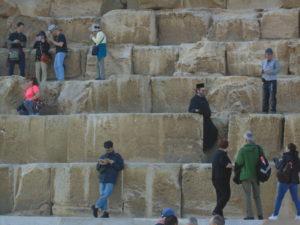 Notice the relative scale of blocks and people

I don’t know about you, but I always thought of the pyramids as being all by themselves in the desert — which they are — without being able to realize that they are also within easy eyesight of the city of 30 million people east of the Nile. Nonetheless, that’s where they are. Three pyramids and the Sphinx, eternally placed, infinitely alone — and if you stay at the right hotel, you look right out on them. 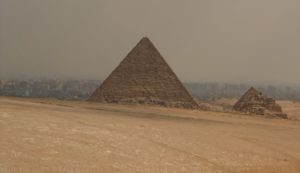 It can be hard to remember, but just across the river from Giza is Cairo, home to 30 million people, several of whom have come to visit.

If you’re interested in the pyramids, you know something of the controversies: why they were built, how they were built; when they were built. Like every other unqualified person, I have my opinion, but in the face of this massive stone reality, how important are opinions and theories? I do maintain, though, that this is not a work that was accomplished by ignorant slaves using copper chisels!

And tell me this: Why would they leave the face of the rock partially smoothed and partially not, as it is here? (This, even disregarding the question of how they smoothed it.) I’ve been puzzling over it ever since I saw it. 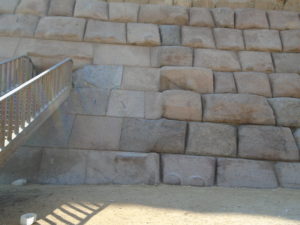