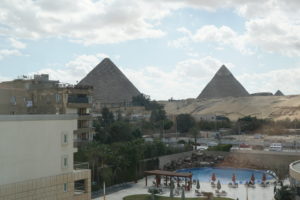 That first day, Monday, I was no longer jet-lagged, but my focus was not yet united.

Airplanes carry us fast and far, and we lose our orienting frame of reference. Mid-Saturday I was in Charlottesville, Virginia. Two flights and several hours later I was in an anonymous big-city airport in Germany. This was six time-zones further east, so it was early morning rather than the midnight that my body expected. After a long jet-lagged wait, another flight, another time-zone change, and the airplane set my body down in another interchangeable big-city airport. This one happened to be named Cairo International, but it wasn’t Cairo, not yet, not really. So far, it was one more big-city airport.

Airplanes carry our bodies fast and far, but it takes us a while to reassemble our bodies and our minds and our sense of place. Jet lag isn’t just a matter of time zones. At least in my case, it’s a very good thing that our tour group arranges to have us met at the airport and shepherded safely into the van that will bring us to the hotel. Alone, tired, ten years unfamiliar with international travel, I would have found coping with forms and procedures quite an ordeal.

But getting through entry procedures doesn’t bring me to Cairo. The long ride in the little van that has been sent to bring me to the hotel begins to do that.

They say Cairo has 30 million people. I can believe it. As we take the long ring road that loops around the south of the city before turning west to cross the river, a fair number of them are contesting the streets with us.

(Thirty million people, in a total population of about 100 million! And Alexandria another 20 million, I am told. Half the population of one of the largest countries in Africa, in two cities.)

As we ride, we talk, the van driver, the tour rep, and me, and I begin to inch my way into Egypt. Naturally we talk in English, as my two words of Egyptian [“la” meaning no and “shokron” meaning thanks] wouldn’t have brought us very far. And naturally there are the occasional puzzlements, like them trying to tell me about the new pollis academy they seem to be proud of. Turned out that pollis was their pronunciation of police.) But mostly we were able to make ourselves clear to each other, at least within the usual limits of cross-cultural communication. Some things are always going to be a mystery.

What we talked about, I have mostly forgotten, but people are people wherever you go, and we’re all concerned with the same essentials and, at the same time, we’re all pretty much mysteries to each other. Or maybe it’s just me who doesn’t have a clue. Anyway, it was a long ride and an interesting free-wheeling talk, and by the time we got to the hotel on the far side of the river, I was beginning to feel that I was in a certain place, at a certain time, rather than barreling through space neither now nor then, neither here nor there.

Then I was at the hotel, and shortly thereafter I was talking to Ruth Shilling, our tour organizer, and to Wouter Bosman, my roommate. I had met them two years before when they were in America at The Monroe Institute doing a residential course called Guidelines, and I was the guest speaker one night. (Wouter had since become an Outreach Trainer in Holland for TMI.)

And then I was energetically repacking so that I would be ready for the morning, when I would finally begin to encounter Egypt.

One thought on “Jet-speed lag”