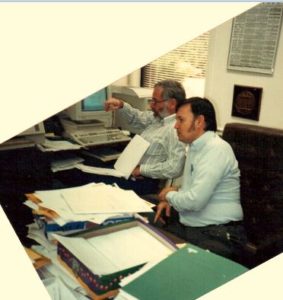 The February Issue of the Echo World is on the stands, so I can post my tribute to Bob Friedman which appears there. I was glad to see tributes there by publishers Michael Langevin and Sofia Axelsson, as well, and author P.M.H. Atwater. (To read the issue, go to http://theechoworld.com/Magazine/magazine.html.)

Bob Friedman and the endless chain

Our lives are tied to others by invisible connections. Who we are, what we think and feel, what we do – it all affects those around us. Some of these connections (with family, friends, associates, casual acquaintances) we see. But our influence upon others doesn’t stop there, not by a long chalk. Bob Friedman’s life is a good example of how our lives are part of an endless chain of influence.

Bob Friedman’s life (Feb. 15, 1942 to Jan. 7, 2019) affected uncounted and uncountable others. He co-founded The Donning Company in 1974, co-founded Hampton Roads Publishing Company in 1989, and founded Rainbow Ridge Books by himself in 2009, in all publishing more than a thousand books, some of which have already changed our world.

In the 1980s, Mary Summer Rain was unknown. Her manuscript had met so many rejections that she was almost ready to give up. Bob read it, showed her what needed to be cut, and added her to his list of authors. If her books had never been published, how many lives would have been diminished?

Similarly, Neale Donald Walsch. As soon as Bob saw Conversations with God, he saw the potential that other people (including me, as I had already rejected it) had missed. How many people’s lives have been changed by the Conversations series? And these are only two of those he shepherded into print.

Only an author can know what it means when someone is willing to invest time and money to get his baby out into the world. Bob’s long-time friend John Nelson, author of five books Bob published, wrote (as part of his yet-unpublished book of Zen poetry):

A friend passes on, and one feels sad.

What do you recall from your first meeting?

A promise of success, or the kind eyes offering it?

Bob spent more than 40 years making it possible for authors to get their brain-children into print. In that alone, he changed their lives, regardless of the book’s subsequent fate. (And, remember, many books with limited sales nonetheless are deeply important to some.) More invisible links. And those affected readers lead lives that then affect others in turn, continuing the chain.

As an Aquarian, Bob valued friendship. I don’t know how many publishers number their authors among their friends, but certainly he did. For that matter, some of his friends dated back to high school years. He kept his friends.

And how many people he influenced! I should know. Over more than 30 years, he and I were friends, then business partners at Hampton Roads, then again friends, and publisher to author. If I had never met Bob, my life would have been unimaginably different.

Up to this point, writing this was relatively easy. But it is difficult to write about our various relationships. Bob and I were extremely close, and bitterly incompatible, and instinctively aligned, and living in different worlds, depending on the time of day. We worked together and pulled off some amazing things, and we worked against each other and wound up losing what we had built from nothing, and then, being forced to work together again, without others (and, in fact, against others), we rediscovered what we had valued in each other, so that our final dozen years were again productive and mutually satisfactory. But nobody else could really understand the good and the bad that went on between us.

What stays with me is the feeling I have had since learning that Bob was on his way out. On the one hand, “Bon voyage!” which is how our mutual business partner, friend and author Ed Carter and his wife greeted the news of someone’s graduation to whatever comes next. I don’t regard death as a tragedy, just as another departure in lives filled with departures. I am fully confident that the spirit that clothed itself as Bob is on to other things.

But for me, as for others who are left behind, what a sense of loss! Over the past dozen years, whenever I transcribed and posted new sessions – with the guys upstairs, with Rita, with Nathaniel – I had this strong sense of Bob as supportive background presence. One after another, he published my books, even though they made him little money. Early mornings, transcribing, I would wonder what Bob would make of the latest sessions. I won’t have that background presence now. (Or perhaps I will, in an entirely new way. Time will tell.)

That’s a small example of how Bob changed lives, in the way our lives all contribute to the great chain of consciousness and connections and consequences.

Frank DeMarco lives in Charlottesville. He is the author of many books on communication with those in the Non-3D world. His website is www.ofmyownknowledge.com. On Facebook, frank.demarco.10.