About a thousand years ago, I was an editorial writer for the Virginian-Pilot and Ledger-Star, a very satisfying time in my life. It was an easy job: write six editorials a week and compose the op-ed page. After my previous years in the wilderness as a computer programmer, it was more an entertainment than an occupation.

Editorial, in the nature of things, tend to be ephemeral. Today’s preoccupations are tomorrow’s yawn. Nothing deader than yesterday’s news, except perhaps yesterday’s opinions about it.

Still, once in a while, it’s possible to say something and meet response. For a couple of years, the VP/LS continued to run this editorial every September even after I was gone. Seems to me it’s just as germane as ever. 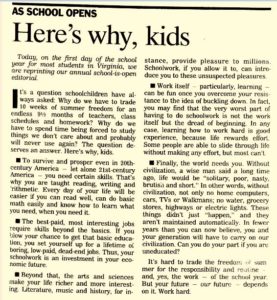