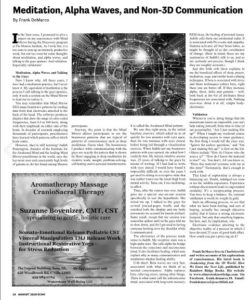 In the June issue of The Echo World, Central Virginia’s metaphysical monthly paper, I promised the readers that I would report in August on what if anything happened in the Discovery program at The Monroe Institute that was going to wire us all up to the Mind Mirror. (August issue, rather than July, because deadlines for copy for the July issue would have been June first, or, in other words, before the program began. Even I am not that intuitive.

August issue is just out. If you are so unfortunate as not to live in Virginia, you can look at it here:  http://theechoworld.com/Magazine/magazine.html