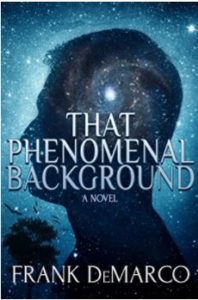 [On Saturday, I drove down to Chesapeake, spent a few hours with my long-time friend John Nelson, then drove to the Virginia Beach waterfront for the night. After a short time on the beach, and then supper, I went to bed, expecting and hoping to be able to do a session after a while.]

1 a.m. Very well, gentlemen, I took yesterday off, and here I am. A sus ordenes. And, a pause. Nothing to say this morning? Want me to try again later? What?

Look out at the ocean. You can’t see it because it is middle night, and the streetlights – or boardwalk lights – that provide any light do not light the sea behind them but the boardwalk before them. Yet you know the sea is there, and if you were to open the door you would hear it.

Yes – above the afro-Cuban music still coming from the room next to mine.

Open the door, just for the moment, not long enough to get cold.

Yes, lovely sound – and I can see the white of the breakers rolling gently in.

You retitled your novel about Angelo’s awakening That Phenomenal Background, because he looked out at the stars that in his normal city-bound existence he rarely saw, and he thought, at one and the same time, the stars were always there even if in normal life humans were unaware of them; even if they never saw them, and on the other hand, that the same thing applied to the hidden realities about life that he had begun to see.

The world is a deeper and more magical place than at first it may appear.

It certainly is – and it need not be unexperienced (if that is a word) merely because one’s surroundings are not particularly conducive to seeing it. Once see the magic and the beauty and the power of your lives, and you have all you need. It is merely a matter of remembering.

Yes it is. But not as big as the word impossible.

You are reading The Three Body Problem.

It is the only book I brought with me. Maybe 60% through it. Strange book. Chinese science-fiction, a Hugo Award winner, first of a famous trilogy.

A view of another world, isn’t it?

The world of Chinese science-fiction, you mean, not merely the world the story is portraying.

Yes. A reflection between the lines.

A carom shot, showing us one thing – or the shadow of the thing, I guess – while ostensibly showing us something else.

That is always so, in fiction. It is a way to suggest truths that cannot be said straight out.

A way to remind you of the unsuspected background.

Okay. I take it you have a point, here?

Your lives are always going to be about something; they are [also] always going to have an unsuspected phenomenal background. Maybe for any given person there is not going to be any reason to be aware of the background, maybe there will be. Either way, it is there, and anyone who denies its existence is either unware of it or is perverse. So – and this is aimed specifically at certain of your readers present and future who will recognize themselves – on the one hand, no need to proselytize; on the other hand, no need to apologize. In the kingdom of the blind, the one-eyed man need not expect to be understood. But he doesn’t need to pretend to be blind, either.

Doesn’t sound like much of a message, to you. But there are those to whom it will come as a revelation.

Oh yes. Remember, your differences from your environment may tend to lead you to assume that you and it cannot both be right, and that it is more reasonable that you are wrong than that everyone around you is.

Shaw said that all progress depends upon the unreasonable man, who will not adapt to his environment.

On the other hand, that iron-willed determination produces a Lenin, or a Mao, or fanatics of any political stripe. The trick is to set one’s reforming instincts to reforming oneself, which is already a recalcitrant enough potential victim (or subject, to put it more kindly).

Always much easier to see what is wrong with someone else.

Yes, only in this case we are calling you to see what is right with yourselves. Like Whitman, we see no advantage to your weeping for your sins. If you have progressed far enough to forgive others, no reason not to start forgiving yourselves! And after all, what is forgiveness but sympathetic understanding of the circumstances behind the action or attitude in question?

Forgiveness is a sort of freeing-up, isn’t it?

“That’s the kind of thing that happens in 3D,” I say now. I take it that something pretty much like it is our attitude once we have crossed over. At least, I hope we have a better perspective on it then.

It is a function of the purgatories and hells that people construct for themselves (by the belief-systems they adopt in life) to get one beyond such limitations. But it is easier, faster, done while in 3D, plus it frees you for further adventures in this life rather than in some future life.

And that’s enough for now.

Sort of slow, this morning. A little more than five pages in 45 minutes.

Not every session needs to be Moby-Dick, or War and Peace.

Till next time, then, and thanks as always.

5 thoughts on “Nathaniel on background”