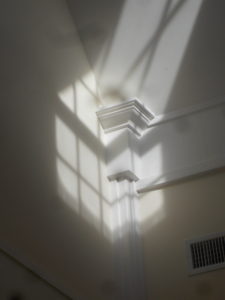 Nathaniel on important and unimportant

3 a.m. Very well, my friend. Not all deciders or decisions created equal?

Surely the point is obvious as soon as broached. It is only common sense, after all.

But if there is one thing this work has taught us to suspect, it is common sense.

Point. Very well, we shall look at it. But it shouldn’t take long. There are decisions that matter and those that don’t. There are people of substance and those of far less substance. You see this every day. The caveat as always is that what you see may not be what you get, but that is a separate point; that merely reminds you that your judgments are apt to be fallible. But the fact that you may misjudge does not mean there are no judgments to be made.

And, I presume, “judgments” in the sense of discernment, not of condemnation.

Of course. Condemnation implies a value judgment, a measuring of how far a given person or action or situation differs from the judging person’s norm or ideal. Discernment is exactly the opposite. It is a clear seeing of what is. Ideally, perfect discernment would precede and inform condemnation; that is, no one would condemn until he or she really, thoroughly, entirely understood what was being judged.

At which point, “to understand all would be to forgive everything.”

In a certain sense, yes. Once one understands, the heat tends to ebb from the condemning impulse. But perhaps the saying is too absolute to be entirely true.

In any case, in practice one knows the difference between important and unimportant decisions in general, if not always in careful specific. To walk down this or that side of a street, to wear blue instead of green, to drive this kind of car instead of another – usually these are trivial decisions and of no great consequence. Yes, once in a while they might be given greater weight by a specific circumstance, but in general, they do not produce decision-points that matter, because they are not decision-points that matter.

I had to think about that sentence for a second. I guess you mean, being themselves trivial in nature, they are unlikely to lead to more consequential choice-points.

Correct. Occasionally, trivial points are decisive, and you call the result coincidence, or chance, or “for want of a nail a kingdom was lost,” but mostly, no, and we want to pursue the usual here, not the exception.

Then there are levels of decision that are in themselves significant but may or may not lead to important choice-points. To stick to externals for the moment, the choice of a career, for instance. For some people, their career may shape their whole lives; all their primary energies may flow into it. For others, it may be of much less importance in that their world centers on other things.

A couple of side-issues floated by when I was writing that. A career as mother, for instance, could be as much a real center of interest as anything else. The much-derided “homemaker.”

Very much so, and for that matter, father. It varies from person to person, but many a person’s life centers in the family they emerge from and the family they create, and these, by the way, are often very centered, oriented people.

Something else floated by, but I forget what it was.

That a person’s consuming interest in life might have nothing at all to do with making a living, or conducting a career, or raising a family – might indeed be entirely invisible to the world, and yet might be just as important. And this is true, but tends more toward the point about being careful in judging the lives of others.

Then – still moving toward matters of greater significance – there are two types of very significant decisions, that may be one-time or, more usually, continuing. These may be decisions as to what to do, or decisions what to be. (And, as always in analyzing, we are somewhat downplaying ambiguities so as to present distinctions more clearly.) These are the defining moments, or – we might equally say – the defining trends, in a lifetime.

What to do. Either a momentous one-time choice or, as we say, an equally momentous but less dramatic continuing choice. A definition of action.

This is going to be a little more complicated than at first appeared, isn’t it?

Possibly. We shall see. The point here is that in choosing anything that is a true either / or, one in a sense alters the path, in a way that is not done by trivial or reversible decisions. Anything that, done (or, alternately, undone) will have irrevocable consequences, is of prime importance. However, the importance may not be noticed at first – or even perhaps ever assessed at its true value, either by the person or by others.

Such questions of doing may involve a choice of schools or jobs or physical relocations that result in unanticipated consequences, such as the people and other opportunities that arise [as a result]. The life one leads because of a move to Cincinnati may differ greatly from the life one leads if, instead, one remains in Detroit. That decision, to do or not do, may not be made out of a conscious intent to bring this or that result, but the result will nonetheless follow.

They say nobody ever moves to L.A. to stay as they are.

Well, be that as it may, at any rate people make significant decisions not consciously knowing what will ride on them. And here, you see, decisions of doing and decisions of being are much alike. Both flow as much from what one is as from what one decides.

You mean by that, I think, that what we are (known to ourselves or not) may then to have more to say about our decisions that we consciously realize. Our decisions may seem to us to be supported by this and that very logical, very rational reason, whereas in fact those reasons are closer to being rationalizations than causes.

And it is those occasions when your unconscious motivations tend to balance out that present your real choice-points. That is, this is when you affect your larger being, your probability-cloud.

So, free will v. predestination, then? Mostly our decisions could have been predicted by anybody who knew us well enough, but sometimes we can surprise them, and maybe ourselves?

You could put it that way. Mostly you are on a smooth glide-path, but sometimes you have to seize control, for only a minute perhaps, or perhaps for a long stretch, and choose what you want to do, what you want to be.

It has somehow been 55 minutes and we have covered fewer than seven pages, though as far as I know we have been working as steadily and well as ever. You have not yet addressed differences in substance among people.

This is conceptually simple, but is ringed with mine-fields, in that people’s perpetual temptation to judge – to condemn – comes easily into play.

Some people are weighty and some are not, you know that. Some are one-pointed, all of a piece; some are self-contradictory. Some are content to skim the surface of life, living the externals; others may scarcely notice the externals in their inward-swelling life.

Not quite clear yet. I know where you are going, I think, but so far you haven’t said it.

You are welcome to try to phrase it directly.

Well, I guess I would say you are working toward a distinction in gravitas, and these preliminary distinctions may tend merely to confuse the subject. Regardless of what we concentrate on, or how we appear to others, the difference you want to emphasize is a difference in seriousness, in character, in – well, gravitas, the way I experienced it in dealing with Carl Jung.

It is difficult to make the point, for lack of jointly understood examples. The externals of anyone’s life may be evident; the internals must always be inferred, which is a tricky business, rich with ambiguity and prone to error.

Let us put it this way. In any trade (to use a more understandable, external, example) you have master craftsmen, journeymen, apprentices, tyros. Right? In any discipline, be it scholastic or religious or philosophical or whatever, you have the same gradations. And in any sense of endeavor, the same. Well, no one who discerned clearly would put equal weight on the opinion or judgment or output of any two stages, especially including those being considered.

That sentence got away from me. I know you meant, even those being judged wouldn’t dream of setting different levels of experience and skill on a par.

That is correct. And it is exactly thus when we consider a given soul’s gravitas. Some are more weighty than others, as is only what you would expect if previous experiences and decisions are to mean anything at all. Now this doesn’t mean these differences may be fairly and safely judged; but they do exist, and they do matter.

And there is your hour, or, in this case, your hour and a quarter.

Thank you. And for next time?

Very well. Our thanks as always.

2 thoughts on “Nathaniel, on important and unimportant”