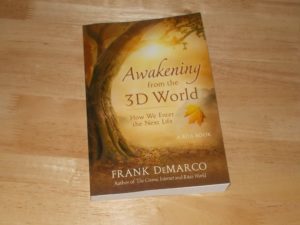 Nathaniel on decisions and the higher self

Then let us proceed to talk about your very interesting speculation.

I don’t know. Okay, here is my journal entry from yesterday. “It occurred to me, on the road to CVS and Kroger, that our higher self’s choices may be what matter, and our individual choices on each path may somehow sway it. But this may be confused. We’ll see.”

It is, in any case, an interesting change of focus, is it not? Another instance of the productive redirection of thought that may occur when you move your focus of attention from your 3D level to your – higher self, some call it, others use other names. Oversoul, say.

Is that what Emerson meant by the term? Or, for that matter, Jane Roberts?

Don’t concentrate on other people’s formulations. Remember what we said about using the written word as inspiration, as sparks, rather than as logic or textbook.

Well, let’s back up a bit, as usual, to draw context.

In 3D you experience yourself as living one life, making choices as you go. You may believe, abstractly, that the alternative lives formed by other choices exist, but it is hard for you to know it in the absence of sensory evidence. Even those who experience inexplicable changes in memory find it hard.

I think you meant, people who remember things that turn out not to be true, or not anymore, let’s say.

That’s right. Even they will usually have to go through a period of adjustment before they can integrate that evidence with that theoretical construct. After all, your sensory evidence works night and day to persuade you that the world is real, is solid, is one time-stream, and explains away any irreconcilable data.

When you arrive at seeing the world as innumerable projected equally sort-of-real versions, your own role in things becomes less clear. Now not only is there conflict between sensory and intuitive, or sensory and intellectual constructs, but also conflict between the logical consequences that seem to follow (on the one hand) and one’s feelings about one’s life.

Yes. It doesn’t feel like our choices don’t matter, even though abstractly we may believe that all choices are made, so it all cancels out.

That is one dilemma that may arise. We will not revisit the free-will / predestination argument, but obviously no matter which of the two choices one finds oneself committed to, the same conflict with feelings ensures. If you are not free, why does it feel like you are? If you are free, but for every heads you choose, another version of you will choose tails, what could be more futile?

So your underlying question of meaning could be restated: What is the point of our choosing? What does our choosing actually affect? If you say, “choosing changes you,” the question remains.

That’s a fair summary. We don’t want to feel useless – Sartre’s “man is a useless passion” – but we can’t just decide that we matter by a sort of force of will to believe, either.

So then, to explore the subject let us – always coming back to the very useful reminder, “as above, so below” – look at things from the next higher level. The probability-cloud, you sometimes think of it. Your higher self, your oversoul, the complete set of results from the expedition sent into 3D in your time and place, using your body and mind.

No, not a Sam. The Sam is a higher level from which – out of which – you were created. No, this is you in your true complete self. Well, complete except we are going to have to ignore so many integral connections to “past lives,” other people, etc. For the purposes of making a compact coherent statement we have to treat “you” – even at that higher level – as if you were the isolated individual that you are not and never could be.

Okay, I get that. A future subject maybe, after we get a clearer picture?

You have the accurate insight that the purpose of your 3D creation – which in effect means the purpose of your 3D existences – is to choose. But that insight was given to you when you had a much oversimplified idea of who and what you are. You thought you were the 3D version you were identified with. We now invite you to identify with your complete selves, your full probability-clouds. (And we lapse into the plural merely to remind your readers that this is to them, not just to you. It does not mean more than one probability-cloud per 3D individual; just the opposite.)

Now, if you identify with the completed self, what is its experience of your 3D excursion / creation? Remember, it has seen – it has lived (at one remove) – every single possible choice, trivial or momentous and all the way between, from which sweater the schoolboy would wear to – well, name your own significant decision. What does your probability-cloud get out of all that experiencing, all that splitting off this way and that way?

I suppose it gets an exhaustive knowledge of the possibilities of that particular excursion.

Yes. Why? Does it amount to taking a survey?

Am I supposed to volunteer an answer? I don’t know. I can see that panorama survey of possibilities, but I can’t see any point to it. It is only my own unshakable knowing that this has meaning that keeps me from Sartre’s futile pessimism, I suppose. The answer has to be choice, but – how?

And here we are at the nub of it. Consider this carefully. (It will be easy to become confused).

You have been thinking of 3D life as choosing in the way your friend Ed Carter described life as perpetually voting. You each do your bit to sway the result, whenever and however it is to be tabulated. But that leaves out the intervening factor that will help you make sense of it.

Yes, I vaguely got this on the road, though it still isn’t clear.

Each 3D version, heads or tails, in effect votes by what it becomes, and this at the end of the 3D day is what determines the composition of the higher self.

By that, I get that you mean, determines its values, in much the same way that our individual decisions determine our values.

Not determine, but express. Though, come to think of it, either way of seeing things is right enough. In any case, it is in exactly the same way, only the higher self is in effect tabulating individual 3D decisions, while the 3D versions are tabulating their own pre-existing predilections, including built-in conflicts.

Now, we may say the most likely source of error in your understanding of this is an unconscious assumption that every heads version contradicts its corresponding tails version. Not necessarily so at all. Obviously trivial decisions, like which side of the street you walk down, usually have no effect on your values. But even important choices of conduct do not necessarily imply differences in values. You see?

Clear, once you mention it. You’re right, I was making that unconscious assumption.

What becomes critical are those times when you are the focus of conflicting impulses (that is how you will experience them) and can, and have to, choose which rabbit to follow. Both heads and tails of many, many other decisions may support the same choice. And sometimes, both heads and tails versions have to choose by deciding within themselves what to do, what to be.

But by definition, don’t opposite choices always get made?

Maybe by definition, yes. But in practice not all decisions or deciders are created equal

And we have to stop here, as you no longer have enough mental energy to bring it through clearly, and it would be a pity to muddle what has so far been useful.

Okay. Next time, then. Our thanks as always.

2 thoughts on “Nathaniel on decisions and the higher self”