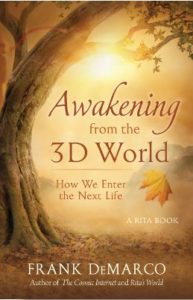 6:15 a.m. “Desire.” That’s the word that finally rousted me out of bed where I lay half-sleeping. Other dreams had been going through the old film projector, but the single word “desire” gave me the sense that this was the theme du jour. Am I correct?

Meaning, it’s up to me to follow your lead or propose my own.

Yes, I get it. That’s the point in a nutshell.

It is. What you desire in life is what you get.

It certainly doesn’t seem that way.

That is because you are not thinking of it correctly. “You,” meaning everybody, you know. Statements meant for you alone are few, and are given separately. Even matters concerning you alone may have applicability for others, and so are given here as a “twofer.” But your own filters assure that no messages too personal for other ears get recorded. It is because you, personally, have wide filters that we can use you this way.

“Twofers,” I should say for the studio audience, is a very old piece of slang. Two for the price of one; “twofer”; an unsuspected or anyway fortuitous advantage. I would offhand expect Americans to understand it, but perhaps our overseas friends might not, so there you are. For that matter, “for the studio audience” is a bit of obsolescent slang too, left over from radio and early television. You guys may need a younger camel.

You will do for the moment. Now, to proceed. The very word “desire” often suggests sexual desire, whereas “desires” suggests many random appetites. Neither meaning will do here. Here, at the moment, we are using the word “desire” in only one way, as meaning the thing you really want in life.

Good that you made that clear. It isn’t the way we use it typically, as you say. But do you mean to imply that we usually (or always, for that matter, or ever) want only one thing in life? One at a time, maybe? Or, one more than others? How do you mean it?

Perhaps we should rephrase and rather than say “the one thing you really want in life,” say “the one way you want your life to be.” For life is not a simple thing, and desires are not additive but are inter-relating and (to coin a word) inter-transforming. Those whose lives consist of desires all of which flow in the same direction lead remarkably able, efficient, single-minded lives. Those – on the opposite end of the spectrum – whose desires are in deadly conflict with one another may have all they can do to hold it together, let alone accomplish anything or find a moment of rest. And everyone else, as usual, may be found on the bell curve between these extremes.

Yes, all right. So, what I was intuiting as I lay in bed was that this was going to be about – “follow your desire, it will not lead you astray.”

Not so far wrong, but not quite that simple either.

Why does that not surprise me?

Matters are always precisely as simple as you wish them to be; no more, no less. But that simple statement is going to require some explanation.

Yes, I should say it would.

“You,” in the first place. As usual, it is vitally important to understanding to know which “you” you’re referring to at any given moment. Who is the “you” who is doing the wishing? The 3D you? The 3D-you in working harness with the non-3D you? Both of these, with the active assistance of other non-3D friends? It makes a difference, as you can imagine.

The 3D-you on its own (and realize, here, no 3D-you is ever on its own, but it may often enough feel like it is on its own, and it may pig-headedly proceed without accessing its own deeper knowing, disregarding conscience, intuition, “irrational” caution signs, etc.)

Had to bring that sentence fragment to a halt, merely because it was getting too long to hold in mind. Proceed.

The 3D-you acting in cooperation with its non-3D component – in other words, living in cooperative contact with intuition, with hunches, with knowings – will be less inclined to confuse superficial and essential desire. It will not be so easily misled by surface appearance, and by that we mean not only external (or, really, externally-perceived) forces, but internal currents and their eddies. And so on and so forth.

I get it. The deeper we live in connection, the truer our compass.

Yes, with the caveat that it isn’t necessarily conscious connection. But yes, as in physical life, the more attention you pay to your compass, the less likely you are to lose your way.

So, you say our lives are always as simple, and only as simple, as we wish. I think you still need to give us some evidence of it. I will say, I sort of get an inner assent, but it is against the evidence of experience.

It is not against the evidence of your personal experience, if you will examine it. You have come to a nice simplified existence that suits you. but where you are going wrong is in thinking that desire manifests immediately and automatically.

I do see. Yes, I was thinking of my turbulent past, and I keep forgetting that you-all don’t so much care what we have been through, as what we come to.

What you make yourselves (what we make our-selves!) by your / our decisions, yes.

So what does this mean? Look  at what a person came to be, to see what his or her desire was?

Subject to the unchanging and unchangeable fact that you can’t really judge anybody’s life, yes. Abraham Lincoln was haunted – foreshadowed – by the feeling that he had been created to do one momentous thing. He knew, even though nothing in the intellectual or religious thought of his day gave him any excuse to know or any support in knowing.

It’s on the record. He said that to somebody – I think it referred to the Emancipation Proclamation, but it may conceivably have referred to saving the Union. The former, I’m pretty sure.

Well, he knew. And in support of that knowing, you might say – or equally, you might say to support that knowing – his life’s desire was to reach a position of influence. So, you see his mainspring, and let us remind you, you see it a whole lot more clearly than he ever did! The 3D Lincoln lived in a clutter of impressions, desires (with a small “d,” so to speak), ambitions, enjoyments, harassments, distractions. He had his logical mind always there to pooh-pooh any thought of his really attaining such a post, or of the times bringing such an opportunity. Ye he married the woman whose consuming ambition could only be reached through his career, and who continually prodded him as he needed. His story-telling ability, his kindness, his sociability, his humility, his awareness of his own worth without a sense of his ability to stand out from others – all this led him to political prominence, and his inclination to deep thought gave him better understanding of his time than those around him in his own professional and political circle, and so lifted him in their estimation.

The 3D-Lincoln didn’t plan that. No one could. The best 3D-Lincoln could do – and did – was to remain in close contact with his intuitions, his deepest sense of reality, and this led him where he needed to go, and where others needed him to be.

I can hear at least one friend of mine saying “predestination!”

It can look like that, surely. Only, that idea omits the fact that what is predestined only takes place when and where you make the supporting decisions.

So predestination depends upon free will! Care to expound upon that a bit?

At another time. It is too much for a mere aside. And, by the way, the sentence is reversible. Free will also depends upon predestination. They are intricately connected. They are, in fact, the same conditions seen through different filters.

Well, that ought to be interesting. Are we finished with “desire” for the moment?

It is worth reminding you, and the reader, to do some pondering on the statement that your lives are always as simple as you wish them to be. It is one more reason why “all is well, all is always well.”

Hmm. Not immediately evident. Very well, see you next time, and thanks as always.

And, as TGU used to say to Rita and you, our thanks in turn, for your attention.

[That word “desire” remaining in my mind, I tried to remember what poem was trying to reinsert itself into my mind, and finally remembered, the Rubaiyat. Before transcribing this morning’s session, I went to this site: http://okonlife.com/poems/

[There it said, “The most famous translation of the Rubaiyat from Farsi into English was undertaken in 1859 by Edward J. Fitzgerald. It appears that in many of his translations, he has combined a few of the Rubaiyat to compose one, and sometimes it is difficult to trace and correspond the original to the translated version. However, he has tried his utmost to adhere to the spirit of the original poetry.” And it was Fitzgerald’s haunting version I had remembered:

[Ah, Love! could thou and I with Fate conspire
To grasp this sorry Scheme of Things entire!
Would not we shatter it to bits–and then
Re-mould it nearer to the Heart’s Desire!

[Not exactly an unfamiliar sentiment, particularly in these times!]

14 thoughts on “Nathaniel on desire”