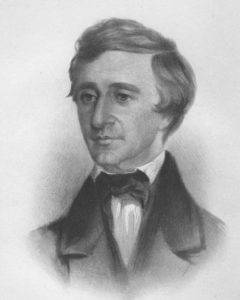 Henry Thoreau was born 200 years ago today, July 12, 1817, in Concord, Massachusetts. A great American, a great citizen of the 3D and non-3D world alike.

Living almost entirely in New England, never venturing farther north than Montreal, never farther south than Philadelphia, never farther west than Minnesota (and that in his final few months, trying to recover from the tuberculosis that killed him), he instead, as he put it, “traveled extensively in Concord,” and affected the entire world, though it took many a long decade before his influence spread so far.

He set down his thought in words that have transformed the life of many a reader, and will transform the life of many persons yet to come.  A gift America gave the world; a gift to the America that shaped him, and the America he would never see. He was only 44 when he died on May 6, 1862.

For context, he was born when James Monroe was president, only five years after the War of 1812. He died under the presidency of Abraham Lincoln, months before the Emancipation Proclamation. (Thus he lived his entire life under the shadow of slavery, with no indication that it would ever be eliminated, though in fact in three years more, it would be gone.) He probably never heard of Ulysses S. Grant, and he certainly never heard Antietam Creek, nor Gettysburg, nor Appomattox Court House. It would be another five years after his death before the transcontinental railroad would be completed, or Alaska purchased. He lived before radio, before telephones, before electric lights,, yet in many ways he’s still ahead of us.

Happy Birthday, Henry, and may your work live on!