My mother’s father, Giuseppe (Joe) Cirelli, born in August, 1889, came to this country at age 16, unable to speak a word of English but determined to learn to paint. After a few years in New York City, he moved to Philadelphia and then to Vineland, New Jersey, where he met his fate in Mary Vasell. They married, and he gave up the idea of being a professional painter, instead becoming a different kind of painter. He made his living as a painting contractor, was deeply involved in politics, raised a family of four and then died, instantly, totally unexpectedly, at age 50 in April, 1940.

The family has only a few of his paintings, and although I know I have photos of the ones we have, I find only these two this morning. Both of these he gave to his eldest child, my Aunt Nonnie (Donata, really, but she was always Aunt Nonnie to me). When I find the other photos, I’ll post them. 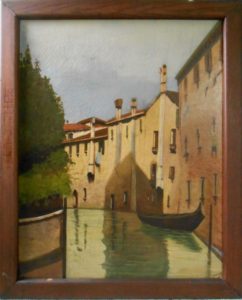 I never knew Grandpop Cirelli. I wonder what he would have thought of the very different kind of painting I fool with. 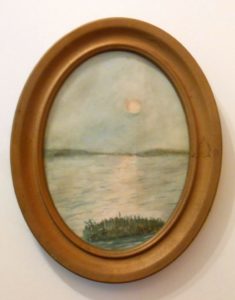