Carl Jung: There is little use in teaching wisdom 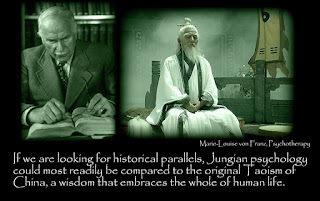 I have read your pamphlet with great interest and I can tell you that I fundamentally agree
with your views.
I see Taoism in the same light as you do.
I’m a great admirer of Ch’uang-tze’s philosophy.
I was again immersed in the study of his writings when your letter arrived in the midst of it.
You are aware, of course, that Taoism formulates psychological principles which are of a very universal nature.
As a matter of fact, they are so all-embracing that they are, as far as they go, applicable to any part of humanity.

But on the other hand just because Taoist views are so universal, they need a re-translation and specification when it comes to the practical application of their principles.
Of course it is undeniable that general principles are of the highest importance, but it is equally important to know in every detail the way that leads to real understanding.

The danger for the Western mind consists in the mere application of words instead of facts.
What the Western mind needs is the actual experience of the facts that cannot be substituted by words.
Thus I’m chiefly concerned with the ways and methods by which one can make the Western mind aware of the psychological facts underlying the concept of Tao, if the latter can be called a concept at all.
The way you put it is in danger of remaining a mere idealism or an ideology to the Western mind.
If one could arrive at the truth by learning the words of wisdom, then the world would have been saved already in the remote times of Lao-tze.
The trouble is, as Ch’uang-tze rightly says, that the old masters failed to enlighten the world, since there weren’t minds enough that could be enlightened.
There is little use in teaching wisdom.
At all events wisdom cannot be taught by words.
It is only possible by personal contact and by immediate experience.
The great and almost insurmountable difficulty consists in the question of the ways and means to induce people to make the indispensable psychological experiences that open their eyes to the underlying truth.
The truth is one and the same everywhere and I must say that Taoism is one of the most perfect
formulations of it I ever became acquainted with.
Sincerely yours,

END_OF_DOCUMENT_TOKEN_TO_BE_REPLACED

If you can’t believe that this was Abraham Lincoln, perhaps you may prefer to treat this as an imaginary conversation. In any case, the question is, does the information resonate? It does to me. Though this conversation took place nearly ten years ago, it doesn’t seem dated. We’re still faced with the same problems.

Election Day. Another step closer to the abyss? A step back? Stay tuned.

I realized, writing to John King, that the stuff I have been given, this past year, is to a point. It was very clear – I lost it again – good thing it is in print, or on phosphors, or whatever.

Very stirred up, of course. Nothing to be done but vote – for whatever that is worth – and see. I have never felt so helpless at that level.

A good reminder, that – for I have never felt more in control. internally. We may have to write off political and economic “freedom” – and then? It can’t be seen, any more than Lincoln could see ahead.

Mr. Lincoln – thinking of you – what can you say to us in the 21st century?

END_OF_DOCUMENT_TOKEN_TO_BE_REPLACED

(From My Joint Mind:) “This particular discussion on knowledge flow begins to take apart structure, which never was there in the first place, except in your mind, and that is disconcerting. Disconcerting because as soon as that structure begins to dissipate, your concept of you dissipate with it.”

What follows is the best I can do after wrestling with the material for about a week now. It is imperfect yet I am beginning to appreciate the value we provide as we go to the mats with knowledge.

END_OF_DOCUMENT_TOKEN_TO_BE_REPLACED

6 a.m. A convergence of suspicious influences. Last night, speaking at Timeline, I was encouraged to see if the guys had a message for the group. The result was to show me my deep conflict between delivering a message – which I am always ready to do – and being seen as a performer, which I am not necessarily ready to do. [Trainer] Lee Stone suggested I look at that, as an obstacle to my being more of a messenger.

This morning I look at my email first – which I never do – and find an email from [my friend] Larry Giannou saying, “I keep getting that it is ok for you to connect with JFK. I also get that he is wanting you to. This has come to me now several times. So, this time I am passing it along. I get it will lead to some important revelations.”

So, Mr. President, are you really wanting to talk to me?

Yes, Mr. Author. I thought we got past that Mr. President stuff last time.

Well, it’s a stretch, for me. It’s still Mr. Lincoln to me, and it isn’t ever going to be Abe.

No, but do you call your brother Mr. DeMarco, and would you use a title in talking to him? You aren’t quite getting what you have been told more than once, or anyway you have been told indirectly: The connections are stronger, more direct, and closer than you think, not just to me or Hemingway but to Lincoln and Jung and others to whom you are strongly drawn for no perceptible reason. Emerson, say, Thoreau. If you are that strongly drawn to somebody, it isn’t just because you’ve heard of them. You’ve heard of thousands of people and you might always ask yourself, why these few?

END_OF_DOCUMENT_TOKEN_TO_BE_REPLACED

4:30 a.m. “Groups of spirits coordinate to form a soul.” Can’t say I’ve gotten any enlightenment from this idea.

But you haven’t done any thinking about it, either.

Perhaps not. Hard to see what to do with it, though.

You may not be awake enough for this. If you want to continue, concentrate.

Now, what did you just do? You recruited your forces. You brought them to the center (your present attention being the center). Can you feel what we mean?

Maybe. There is some analogy between the act of connecting and the bringing into being a new soul.

END_OF_DOCUMENT_TOKEN_TO_BE_REPLACED

The point that may not be obvious to you is that everybody, at every stage of development, contributes what they are. I don’t mean “everybody does their best,” although that is true too, in a way, but everybody as they are contributes to a complete picture.

I feel moved – though it also feels like an interruption – to mention the confused grammar around “everybody.” Noticed it yesterday too. Mixing singular and plural in the same statement, only now I get the sense it is more a deliberate choice than carelessness. Yesterday I assumed it was because you were on the fly.

You were doing the same thing, and for the same reason. The singular / plural thing is worse than distracting, it is misleading. In fact, it cuts against what we’re concentrating on here, which is that singular or plural is more an expression of a point of view than a description of anything really distinct. And your “interruption” just now assists, because that’s still what we’re talking about.

You could look at it (and usually you do look at it) like many, many people are cooperating to create or maintain a situation. All the world’s a stage and everybody is a player / everybody are players.

That didn’t quite work.

No. But the point remains. You could (and sometimes you do) see it all as one vast intricate organism whose parts coordinate in the way the organs of your physical bodies coordinate; or the way groups of spirits coordinate to form a soul.

END_OF_DOCUMENT_TOKEN_TO_BE_REPLACED

In reply to a comment by Jim Austin in response to “John Dorsey Wolf — a Greater Context,” Inge Lise Karlsen chimed in from Norway to quote an old book that perhaps deserves our attention. [I checked: The book is in print.]

….here the other day looking into the old book written by Franklin Merrell-Wolff….on the backcover is it written:
On August 7, 1936 Franklin Merrell-Wolff awakened ( with big letters ). And below is it told:
” For a hundred and one days, this process of Awakening continued. At its culmination, Merrell-Wolff had developed the ability to enter a state of infinitely expanded consciousness. Here, in PATHWAYS THROUGH SPACE, this sensitive scientist-thinker ( as many others of the time did, etc. ) gives you a coherent practical guide to reaching the spaces of higher consciousness.”

But what caught my eye, in chapter XL, page 99 in the old book:

” I recognize, in ever increasing numbers, signs of the Supreme Light.
“While there are few for whom the Sun has risen in Its full Glory, the number who have known the Twilight before the Sun appears above the horizon, or have perhaps just glimpsed the Sun as Its rays barely surmount the barrier, is much greater than I had thought.
“There is also another and more mysterious class of which members were born with the Sun above the horizon, but the Rays were obscured by a cloud-filled sky. For these, the Sun first rose in other lives, but for one reason or another They have taken incarnation under obscuration.
“The clouds may or may not break for Them during the current lifetime.
“It depends primarily upon the original purpose.
“It is sometimes necessary to drive through from below in order to force new Doors and, in such cases, the Pioneer is very apt to be one who first broke through in some other life. Sometimes the obscuration may serve the purpose of rest for The Inner Life, if the Final Rest is refused, is considerably more intense than life within the egoistic consciousness.
“Emerson is one of the known examples of such obscuration.
“The trace of the Ancient and Eternal Wisdom is to be found strongly marked in several of Emerson`s works, and the obscuration easily accounts for the atypical in this case.”
A remark:
This chapter is headlined: ” Communion in the company of the Realized,” and beginning with the praise of Spinoza, Kant, Hegel, Plato, among others, Merrell-Wolff declares: ” How greatly do They reveal to Me how much I (underlined) Know!

And the very same have I FELT by Frank`s website together with all of you folks. I have thought Merrell-Wolff sounding as a POET in the way he is describing everything. Back then the written language was far more ” colorful ” in its expression.

AND these things were written when the Nazi-Movement rising to its heights in Europe, and only 14 years back in time with the ending of WWII …. ? Franklin Merrell-Wolff also “discussing” the illusion of time but in a very “old-fashioned” manner. The language is how the youngsters of today being able in doing it (in the way of thinking back then, of the understanding living back then….. as for us not experiencing the same).