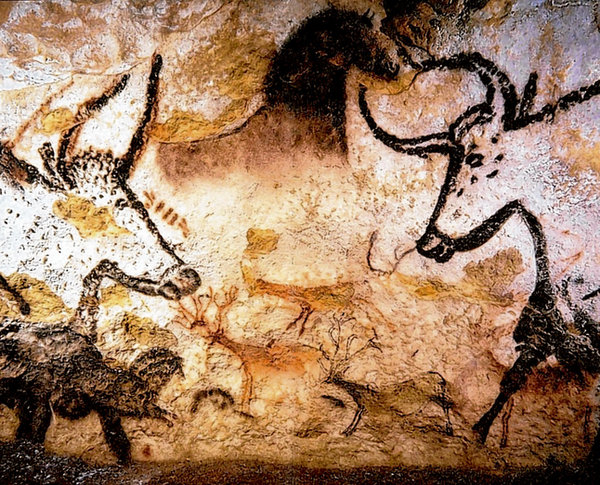 This story, courtesy of the Weekly Science Report put together by Steve Detwiler, makes me laugh, it is so naïve. “To me at least, finding these great paintings from so far back in time is a bit like finding an iPad with no previous evidence of the development of electronics. How does humanity plunge so suddenly into this great sea of creativity? Unless there is a whole history of extremely old and not-very-good cave paintings still to be discovered, we are left with the sudden birth of a fully formed pictorial art.”

At least the writer is thinking, but his assumptions are so ridiculous. They are worth noticing only because he shares those assumptions with what is called “science” – which, in context, means “currently popular opinions among mainstream scientists,” which sounds, and is, a lot less authoritative!

Science is still clinging – by its fingernails! – to the idea that humans and human culture are relative newcomers to the scene. In this they are closer than they realize to the mind-set that led Bishop Usshur to calculate, working backwards from Genesis, that creation dated from 4,000 BC. (Wikipedia says: “The Ussher chronology is a 17th-century chronology of the history of the world formulated from a literal reading of the Bible by James Ussher, the Anglican Archbishop of Armagh (in what is now Northern Ireland). The chronology is sometimes associated with Young Earth Creationism, which holds that the universe was created only a few millennia ago.” Bishop Ussher went wrong by reading the Bible as if it were something it was not. Myths may encapsulate great truths, but those truths are not to be found by reading the text as if it were attempting to do something totally different. Genesis was neither a history nor a science text, and never intended to be either.

Science-worshippers deride Bishop Ussher’s chronology. Yet they are doing something that is intellectually less excusable. The more you look at the evidence, the clearer it is that the “accepted” chronology for human life and culture is totally impossible. And what kind of science refuses to look at evidence because the evidence disturbs – overturns – too many theories? Yet that’s the situation today, and has been for many decades.

Disturbingly good: some of the drawings in Chauvet

THE ROCK paintings in the Chauvet cave in southern France that are the subject of Werner Herzog’s marvellous film Cave of Forgotten Dreams are both astonishingly old and disconcertingly new.

The old part of the equation is as obvious as it is astounding. The entire history of human settlement on the island of Ireland spans about 10,000 years. The Chauvet paintings are three times older than that.

Their discovery in 1994 revolutionised the history of art. The charcoal used for drawings of rhinoceroses and bison on the cave wall proved to be about 31,000 years old. That’s almost twice as old as the rock art of Lascaux, previously considered to be the first flowering of the human impulse to draw or paint images.

The Chauvet paintings, moreover, are disturbingly good. Logic would suggest the first efforts at anything ought to be a bit crap. This is not to patronise our ancient ancestors but merely to suggest that any radically new endeavour ought to begin with fumbling trials and unfortunate errors. There are many mysteries about the Chauvet paintings, but the biggest is their sheer accomplishment. It would be awe-inspiring to think of people making art of any kind in the harsh environment of Ice Age Europe. It is quite shocking to think of them making great art.

And yet, as you can see in Herzog’s film, these images are great art. The lines are drawn with fluidity and elegance. The artists understood and used techniques like shading and perspective. Instead of regarding the uneven surfaces of the cave as impediments, they used them to their advantage, deploying the curves and niches in the rock walls to create vivid impressions of life and movement. There is even what Herzog calls an element of “proto-cinema”: some of the animals are drawn with multiple legs to suggest rapid movement. The images were placed in a dark space, flickeringly illuminated with torches: the effect may have been somewhat analogous to that of watching a movie.

These techniques are so extremely unlikely that there was a strong suspicion the paintings had to be a hoax. By proving otherwise, archaeology and carbon dating do something that scientists must find uncomfortable: they deepen a mystery. To me at least, finding these great paintings from so far back in time is a bit like finding an iPad with no previous evidence of the development of electronics. How does humanity plunge so suddenly into this great sea of creativity? Unless there is a whole history of extremely old and not-very-good cave paintings still to be discovered, we are left with the sudden birth of a fully formed pictorial art.

In Herzog’s film there is a delightful but (to me) unconvincing suggestion about the origins of this art. An expert says people learned to make paintings from seeing their own shadows on the wall. Herzog mutters “Fred Astaire” and then cuts to Astaire dancing with his shadows in a brilliant sequence from George Stevens’s 1936 movie Swing Time . It’s a lovely thought and typical of Herzog’s habit of inspired analogy.

But it doesn’t make much sense. The intriguing thing about the Chauvet paintings is that the artists chose not to make images of human beings like themselves. They clearly had the techniques to represent the human form, but it did not interest them.

There are handprints of the artists (one recognisable by a deformed little finger). And there is one image of the lower part of a woman’s body, its sexual features exaggerated. But it is linked to or even fused with a bison. This is not a realistic depiction of a woman but a mythic image strikingly reminiscent of Picasso’s paintings of the woman and the minotaur.

Not only are there no humans: there are no human activities in the paintings, either. Where are the depictions of hunting and fishing, of huts and campfires? But the absence of the human goes even further. The most rational explanation for the effort that went into the creation of these marvellous images is that they represented some kind of magical control over the game the hunters would pursue. As Ernest Gombrich put it in his classic The Story of Art : “These primitive hunters thought that if only they made a picture of their prey . . . the real animals would also succumb to their power.”

This makes complete sense except for one thing: the animals in the Chauvet images are mostly not those that were hunted. Sixty per cent of the paintings are of dangerous animals like lions, bears and rhinos, which did not form part of the Paleo-lithic diet.

Here we can perhaps draw some inspiration from what is so new about the Chauvet images. They are, for us, a form of virtual reality. We can never “see” them. Their delicacy and importance mean access to the cave is limited to 12 people a day, for just 30 days a year. Apart from a handful of scientists, Chauvet will always be off-limits.

It exists within our culture, therefore, primarily as a simulacrum. Herzog’s entrancing 3D documentary is not, in effect, a record of Chauvet. For the vast majority of humanity it is Chauvet. These images from 30,000 years ago now exist primarily in the digital realm.

Perhaps, though, this does not alienate us from the distant ancestors who made the paintings. Maybe it brings us closer to them. Perhaps they made the images not to mirror reality but to create a parallel, virtual reality.

Might it have made sense, rather than having to capture and sacrifice dangerous beasts, to offer the gods a metaphor, an image that is even more powerful than the real thing? If so we are left with the reassuring thought that the need and desire to create alternative realities is not some perversion of the modern human brain but has been hard-wired into it for as long as we can imagine.