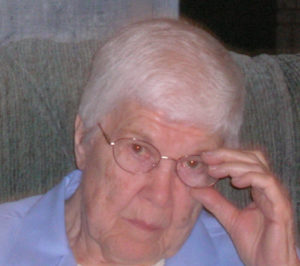 Miss Rita, anything you’d care to say on this anniversary of your escape? You see, you weren’t left here because they’d forgotten to pull the plug!

I knew and at a level you knew that that was my last chance to say goodbye, when Sharon was there to take me and you had popped down to say goodbye – for the day, you thought at a conscious level. But at a deeper level you felt yourself your shrinking away into comedy.

I did. It was obvious of course as soon as I heard that you had had the stroke.

No reason to regret it – what could we have said that we hadn’t said long ago?

No harm done. Even less so here, given that on this site, once we contact the other side – your side – we know.

So – how are you getting on?

The material we received has been very helpful to me because it moved my “habit systems” as they call our minds, from a certain set of beliefs into more of a fluid state of expectation and undefined possibility. As they warned us, their explanations are distorted by being made to fit into time-space, but they did help.

So you are not going to plumber’s apprentice school or something like that?

No, and not becoming a roofer.

[This exchange reflects some of our banter with the guys in past conversations.]

I got the feeling – from you? – that our picture of minds on the other side was a little too static, a little too focused on the translation of our minds from here to there.

The important thing was to give us on your side a sense of similarity as a bridge, because the older concepts were too rigid and too far removed from anything people could get hold of. Since anything they said was going to end up distorted anyway, they chose to suffer distortion in that direction rather than in the direction of differences emphasized.

So, it’s a little more active than we surmised, or deduced.

I won’t be able to tell you anything more than they did, you know. The variable will be your ability to translate, which rests on your ability to move, to change your vantage point. Not a major problem for you.

It brings graduation from TMI at least in one sense – it is an equivalent done in a different way, and so for the first time provides you a way to compare and contrast.

Have I ever explicitly sought to thank you for all you did for me over eight years? If not, consider yourself thanked. A very loving gift, freely offered – including your gift of accepting a sort of filial non-sexual love and blossoming from it.

One advantage of direct communication between minds – though it is rather closer than “between minds ” – is that one does know. What was hidden or even obscure becomes plain.