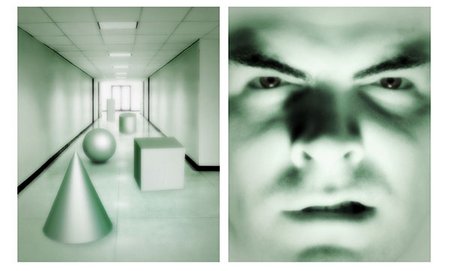 William Duke
BLINDSIGHT A patient whose visual lobes in the brain were destroyed was able to navigate an obstacle course and recognize fearful faces subconsciously.

The man, a doctor left blind by two successive strokes, refused to take part in the experiment. He could not see anything, he said, and had no interest in navigating an obstacle course — a cluttered hallway — for the benefit of science. Why bother?

When he finally tried it, though, something remarkable happened. He zigzagged down the hall, sidestepping a garbage can, a tripod, a stack of paper and several boxes as if he could see everything clearly. A researcher shadowed him in case he stumbled.

“You just had to see it to believe it,” said Beatrice de Gelder, a neuroscientist at Harvard and Tilburg University in the Netherlands, who with an international team of brain researchers reported on the patient on Monday in the journal Current Biology. A video is online at www.beatricedegelder.com/books.html.

The study, which included extensive brain imaging, is the most dramatic demonstration to date of so-called blindsight, the native ability to sense things using the brain’s primitive, subcortical — and entirely subconscious — visual system.

Scientists have previously reported cases of blindsight in people with partial damage to their visual lobes. The new report is the first to show it in a person whose visual lobes — one in each hemisphere, under the skull at the back of the head — were completely destroyed. The finding suggests that people with similar injuries may be able to recover some crude visual sense with practice.

“It’s a very rigorously done report and the first demonstration of this in someone with apparent total absence of a striate cortex, the visual processing region,” said Dr. Richard Held, an emeritus professor of cognitive and brain science at the Massachusetts Institute of Technology, who with Ernst Pöppel and Douglas Frost wrote the first published account of blindsight in a person, in 1973.

The man in the new study, an African living in Switzerland at the time, suffered the two strokes in his 50s, weeks apart, and was profoundly blind by any of the usual measures. Unlike people suffering from eye injuries, or congenital blindness in which the visual system develops abnormally, his brain was otherwise healthy, as were his eyes, so he had the necessary tools to process subconscious vision. What he lacked were the circuits that cobble together a clear, conscious picture.

The research team took brain scans and magnetic resonance images to see the damage, finding no evidence of visual activity in the cortex. They also found no evidence that the patient was navigating by echolocation, the way that bats do. Both the patient, T. N., and the researcher shadowing him walked the course in silence.

The man himself was as dumbfounded as anyone that he was able to navigate the obstacle course.

“The more educated people are,” Dr. de Gelder said, “in my experience, the less likely they are to believe they have these resources that they are not aware of to avoid obstacles. And this was a very educated person.”

Scientists have long known that the brain digests what comes through the eyes using two sets of circuits. Cells in the retina project not only to the visual cortex — the destroyed regions in this man — but also to subcortical areas, which in T. N. were intact. These include the superior colliculus, which is crucial in eye movements and may have other sensory functions; and, probably, circuits running through the amygdala, which registers emotion.

In an earlier experiment, one of the authors of the new paper, Dr. Alan Pegna of Geneva University Hospitals, found that the same African doctor had emotional blindsight. When presented with images of fearful faces, he cringed subconsciously in the same way that almost everyone does, even though he could not consciously see the faces. The subcortical, primitive visual system apparently registers not only solid objects but also strong social signals.

Dr. Held, the M.I.T. neuroscientist, said that in lower mammals these midbrain systems appeared to play a much larger role in perception. In a study of rats published in the journal Science last Friday, researchers demonstrated that cells deep in the brain were in fact specialized to register certain qualities of the environment.

They include place cells, which fire when an animal passes a certain landmark, and head-direction cells, which track which way the face is pointing. But the new study also found strong evidence of what the scientists, from the Norwegian University of Science and Technology in Trondheim, called “border cells,” which fire when an animal is close to a wall or boundary of some kind.

All of these types of neurons, which exist in some form in humans, may too have assisted T. N. in his navigation of the obstacle course.

In time, and with practice, people with brain injuries may learn to lean more heavily on such subconscious or semiconscious systems, and perhaps even begin to construct some conscious vision from them.

“It’s not clear how sharp it would be,” Dr. Held said. “Probably a vague, low-resolution spatial sense. But it might allow them to move around more independently.”

One thought on “Blind, Yet Seeing”