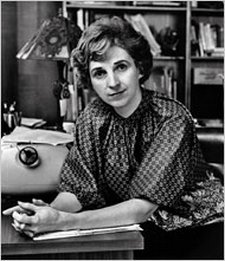 She was never one of our authors, but like others in the field we are indebted to her. This obit from the New York Times.

Marilyn Ferguson, whose 1980 book “The Aquarian Conspiracy” became a bible of the New Age movement, died on Oct. 19 at her home in Banning, Calif. She was 70.

The cause was believed to be a heart attack, said her daughter Kristin Ferguson Smith, of Los Angeles.

The Los Angeles Times, 1980
Marilyn Ferguson
“A leaderless but powerful network is working to bring about radical change in the United States,” Ms. Ferguson wrote in her best-selling book. “Its members have broken with certain key elements of Western thought and they may have even broken continuity with history.”

With a breathless sense of wonder and anticipation, Ms. Ferguson described ideas and discoveries that promised a new age of personal fulfillment and limitless potential. She surveyed pioneering work in mind-brain studies, holography, psychotechnologies, parapsychology, holistic medicine and a host of other emerging fields that, taken together, added up to “a benign conspiracy for a new human agenda.”

“The Aquarian Conspiracy,” which she once called “a synthesis of essential, life-giving truths,” was the New Age movement’s great catalog, gathering in one volume many of the ideas, theorists and attitudes that would gain cultural currency in coming years.

Some reviewers found Ms. Ferguson credulous, boosterish and highly selective in her presentation of scientific evidence, but readers responded enthusiastically to her tidings of the New Age. “It gave a name to something, and that something was a cultural movement that had not been seen from the broad perspective that she gave it,” said Jeremy P. Tarcher, her publisher. The moment was ripe. With books like “The Third Wave” by Alvin Toffler and “Megatrends” by John Naisbitt appearing about the same time, and the human-potential movement surging, Ms. Ferguson found herself propelled into a new career as a lecturer, motivational speaker and teacher, although her educational courses, she once said, were “more like shamanic journeys” than ordinary seminars.

Marilyn Grasso was born in Grand Junction, Colo. After attending Mesa College in Grand Junction and the University of Colorado, she began writing poetry and short stories. In 1968, she published “Champagne Living on a Beer Budget,” written with her second husband, Michael Ferguson. An early marriage ended in divorce, as did marriages to Mr. Ferguson and to Ray Gottlieb.

In addition to her daughter Kristin, she is survived by her son, Eric, of Beaumont, Calif.; her daughter Lynn Lewis, of Oakland; and six grandchildren.

While studying transcendental meditation in Los Angeles, and watching her children grow, Ms. Ferguson developed an interest in new findings on the brain and consciousness that led her to write “The Brain Revolution: The Frontiers of Mind Research” (1973). She also founded a journal devoted to the subject, Brain/Mind Bulletin, which turned out to be so successful that she created a companion publication, Leading Edge, in 1980. Described as “a bulletin of social transformation,” it dealt with politics, relationships, business and the arts.

While editing Brain/Mind, Ms. Ferguson began organizing information that was not suitable for it in folders. These supplied the raw material for “The Aquarian Conspiracy.” The book generated a belated sequel, “Aquarius Now” (2005), which made little impact. Aquarian energies, perhaps, had flagged. Or else the benign conspiracy had achieved the ultimate victory: its once revolutionary ideas now seemed commonplace.

Ms. Ferguson’s message was relentlessly positive. In the dawning new age, people would exercise their talents to the fullest; war and social hierarchies would disappear; and the human race, impelled forward by thrilling new scientific discoveries, would embrace the happiness that belonged to it by birthright. The future was not just bright, it was radiant. She once told an interviewer, “We are going to see a burst of creativity that will make the Renaissance pale in comparison.”

One thought on “Marilyn Ferguson, New Age Author, Dies at 70”