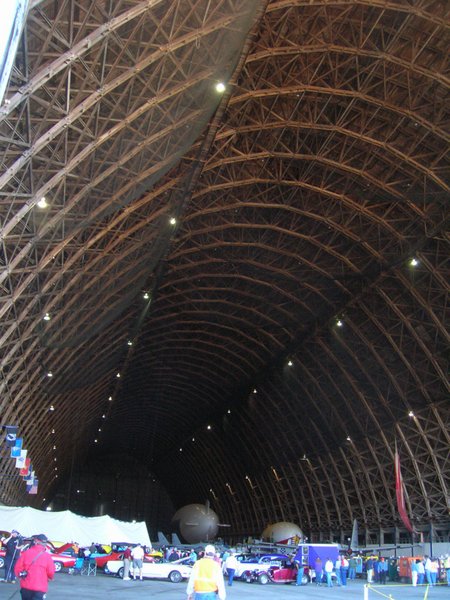 Standing on the deck of the lightship Columbia in Astoria, chatting with the caretaker, I had told him I was going to be driving down the coast, and asked him what he would recommend seeing. He mentioned two or three things, but the one that stuck was the air museum at Tillamook. I made a note, and the next day, here I am.

It’s huge. The top of that arch is something like 190 feet in the air. Eight full-sized blimps sheltered there during the war, and eight more in its companion building. The buildings were made entirely of wood, because during the war metal had to be reserved for building ships and trucks and tanks and artillery pieces and shells and communication wire and all the million other things needed in an all-out war effort. Each hangar comprised something like two million board-feet of timber, designed and slapped together as quickly as possible, because of the desperate need. 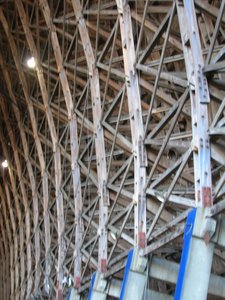 One of eight (I think it was) blimp bases constructed along the Atlantic, Gulf and Pacific Coasts during World War II, Tilamook was located the farthest north. North of Tilamook, the weather got too bad, and interfered with operations.

It’s strange that more people don’t know how essential blimps were to the war effort. It is a fact, scarcely believable the first time you read it, that throughout the war, no convoy escorted by blimps ever lost a ship to a submarine. So effective were the huge floating air-platforms that the navy tried (unsuccessfully) to find a way to use aircraft carriers as blimp-tenders, docking the huge machines on the ship’s flight decks so as to vastly increase the blimps’ effective range. 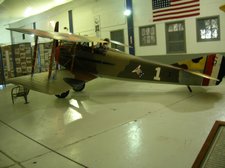 After the war, blimps were again out of favor, and the huge hangers were deserted, or devoted to other purposes. Of the two at Tilamook, one was used to store thousands of bales of hay, and despite precautions went up in flames one memorable night. The other remains as Tilamook Air Museum, displaying reconditioned antiques like a World War I Jenny (JN4).

Also world war II vintage planes like the Spitfire, Lightning, Mustang and more. Commercial and stunt planes are there too, and a smaller scale blimp, and of course an extensive exhibit on the construction and history of the base and hanger itself.

It’s a huge space, and they use it to display other things. The day I visit, there is a display of antique autos that probably would have been worth looking at. But I don’t give the cars five minutes. This day, I have eyes only for machines that lived in the air.