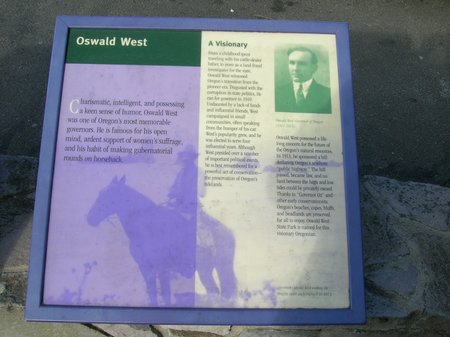 Saturday Sept. 17, 2005. Driving down the coast from Seaside, Saturday morning, I come to Neahkanie, a mountain that juts into the seacoast, interrupting the long flat highway of sand that extends, otherwise, down the Oregon coast from the Columbia River to the California state line. At a scenic turnoff at Neahkahie is a marker honoring Oswald West, the state’s Governor from 1911 to 1915. He deserves that monument. He helped save 400 miles of beaches for the public. 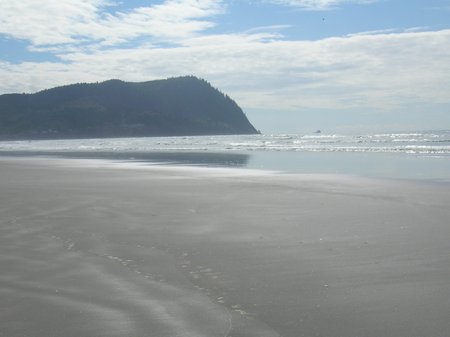 His legislation made all the land between high and low tide a state highway. In this, he was backed by Oregon sentiment and history, for the seacoast was bordered by the Coast Range, and for half a century that strip of land between high and low tides had been the easiest, the most practical, and often the only way to travel from north to south. So it really had been a highway, and the citizens and legislature of Oregon saw no obstacle to the fact being recognized in law.

Good thing they did! Governor West’s law meant that no one could build on it or own it, and it means that today there is wonderfully great access to beaches all down the coast, which is not the case almost anywhere else in the country that I know of. In the name of “private property,” much of this country has been taken from us. The little that is left to us, like the National Park system, is naturally over-used and over-crowded. When a few people have gobbled up the bulk of the land, the little left for public use is going to be over-crowded and half-ruined by too many people competing for use of it. It could hardly be otherwise. This is not only poor land management, it is theft, for who gave the earth over to the few who can afford to buy it?

Rivers are nobody’s to own, and so we all have a better chance to enjoy them than we would if people or corporations were able to buy them up and restrict our access to them. Similarly, the oceans, and the ocean of air above us. (“Thank God they cannot chop down the clouds,” Thoreau once said.) But the land is parceled out, and trespassers beware.

Not the least of the tragic mistakes our ancestors made was to bring old-world ways of land appropriation to this new world, and in fact to exaggerate those ways with the extensive use of “fee simple” ownership. This tended to make ownership absolute, so that with time any concept of social responsibility faded, and what remained was the idea that people could buy outright their own bit of land, and that they then had the right to do whatever they wished with it, regardless who it disenfranchised, and regardless what damage their use caused to other people, or animals, or the land itself. We are still counting up the cost of that divisive way of doing things, from soil erosion to the wholesale waste of irreplaceable resources, to the externalization of costs (pollution), to the exiling of whole generations of people from the land which is a part of their birthright.

Perhaps it is easier for us today to understand the bewilderment and anger and ultimately the hopelessness the Indians felt when they realized that the white man’s idea of what he had bought with his beads and guns and whiskey was not the right to share the land, but the right to put up fences and deny that land to anyone else. This has turned on us, and today we are as disenfranchised as the Indians who were the first victims of the land-ownership system.

But Oregon at least still has access to the seacoasts God put there for them, and for this they can thank Governor West. My brother points out that it wasn’t West alone, but something in the Oregon character, that allowed them to decide to save the beaches. This is true enough. But the governor took the initiative, and he should be remembered with gratitude.