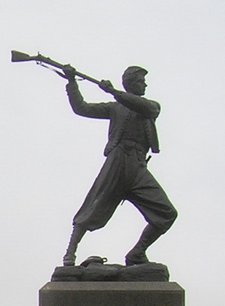 Conversations with a “past life” American

about the challenges, opportunities

and meaning of his time and ours

Common sense says that we cannot talk to the dead, nor they to us. But this “common sense” depends upon two unstated assumptions: (1) that only the present moment exists, with the past gone and the future not yet created, and (2) that the dead either cease to exist or exist beyond the range of the living. Despite these assumptions, stories of people seeing the future and communicating with the dead are in all the world’s scriptures, and are scattered throughout recorded human experience.

The souls of the dead remain alive, outside of time and space, with all times and all spaces available to them. Thus, when we communicate with them, they interact with our minds from the inside, so to speak, knowing what we know. Thus we can communicate about the things in our life, getting the benefit of viewpoints formed in very different space and time environments.

I have been doing this since 1989. Chasing Smallwood contains a series of such conversations that happened over a few months in 2005 and 2006. I started out simply thinking to talk to Joseph about his life. Before you know it we were hearing that our time has a huge task ahead of it and that what we are and what we do is important to the other side. Big jump.

Can we prove that in talking to the other side we aren’t just making it up as we go along? I don’t think that we can. At least, I myself have been unable to do so to date. Perhaps the question is unanswerable. Some of what I take to be facts may be wrong. Some of them must be wrong. Quite possibly this is a mixture of fact, distorted fact, and unconscious invention, all jumbled together.

It is up to us to unscramble the story as best we can. Yet – Joseph Smallwood is there, and you will see for yourself that he has a lot to offer us. You’re going to have to judge the material on its own terms, rather than looking for external validation. Does it resonate? Is it helpful? Does it lead you to new understandings?

· How to communicate with the dead — that is, how you can learn to move between normal consciousness and an altered state in which you allow someone else to form the words. This is not trance channeling, nor automatic writing, nor self-hypnosis. I have been doing this since 1989, experimenting, questioning, doubting, testing, arguing all the way. Fortunately, it isn’t necessary to know ahead of time what you are doing or how it works. How to bring it through and not choke it off is the hardest thing you need to learn.

· The life of a particular 19th-century American– Joseph Smallwood’s life and opinions, centering on his life in the West and his experiences as a Union officer during the Civil War.

The physical world’s place in the scheme of things — how and why the physical world is important to the nonphysical world. (In short, our choices affect things on the other side, just as the world’s spiritual traditions have always insisted.) I don’t know if they care about our social arrangements. They’re after larger fish. The spiritual crisis of our time, they’ve said, centers on the death of materialism and the struggle over what is going to replace it. And that bring us to

· The massive task facing us today – the challenge of our times that we are not yet facing, a challenge resembling that posed by the Civil War (which no doubt is why Joseph rather than someone else came to talk to me).