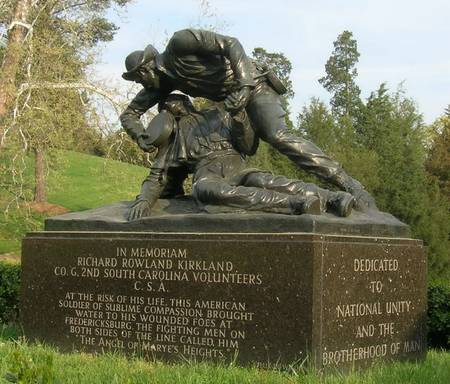 This 19-year-old risked his life on Marye’s Heights to give aid to the wounded on the other side while the battle was still going on. The federals when they realized what he was doing stopped shooting and sent thunderous cheers. The boy was killed the following September, a month after his 20th birthday–but his generous act had assured that his name would live.

Last Friday and Saturday, my friend Jim and I visited the sites of two Civil War battlefields: Fredericksburg and The Wilderness. In 2006, similarly, we had gone together to visit the battlefield at Gettysburg,

Those who have been following this “Chasing Smallwood” thread know that I am in contact with a Union veteran named Joseph Smallwood. Jim is similarly connected to a Confederate veteran named Hank who, like Joseph, survived the war. But Hank, unlike Joseph, has continued to be bitter about the war, having lost his home and his previous way of living to what he considered to be an unjustified invasion of his homeland.

When Jim had suggested that we visit the site of Fredericksburg I instantly agreed–but I also felt butterflies in my stomach. I wasn’t sure that Joseph was looking forward to revisiting that particular ghastly experience. Yet I knew it was important.

Joseph, I can see I don’t have energy, by myself, so to speak, to describe things. And anyway why should I describe secondhand what you experienced? Much of what went on I probably didn’t even know. What I know: tears before we began, a feeling of reconciliation and of things being resolved, and the beginning of a more joking relationship with Hank.

You may be right that I come after you in soul progression, even though before you in time. The work you have been doing has changed you, and that helps change me. You’re right, I don’t have the bitterness you did. But maybe I am helping you, have you thought of that?

When we were at the visitors center at Marye’s Heights, it did come on me some, it is true. It was only a movie, and that voice in your head that is always saying “that can’t be right, that isn’t a good reproduction of how it was, those are just actors” – who do you suppose it is, saying or feeling all that?

But we were right there, and we were there intending to walk that line, and I knew that. The movie was more effective than it would have been in your home, say. So yes, there were some tears, walking out of there. And your friend Jim may have seen them; anyway he felt ’em. And that means Hank felt ’em secondhand — or third- or fourth-hand, whatever it was, and that helped him.

Of course these things are always all mixed up because there’s you in your century experiencing feelings and wondering if you are dramatizing things, and it all gets tangled–but the main things get through.

So, we walked that line, as I of course never did in life. There wasn’t a Union men hardly who did in December ’63, and most of them were soon dead. And I saw it from the rebel side and I saw it from the 21st century side, call it, and like you felt, I felt it as “all long ago.” That’s what you were feeling, “it was a long time ago, it’s over now.”

And that walk in the Wilderness where I wasn’t–thank God!–and Hank was, that was the same thing, reversed. There you and I were, honoring what Hank had been through. And it all adds up, you know. You and Jim talking while you walked made it different thing. Hank got it, too–it was a long time ago, it’s over, it was hard for both sides and it wasn’t maybe as open and shut as he had been thinking. You and Jim share things like other wars, and social problems and all–and even your love of buying books and reading them–and it all makes a bridge, like, between Hank and me. I held out my hand to him quite a while ago, your time, but he wasn’t ready to take it. He’s nearer to it now; it’s been healing just the way you have.

It wasn’t even supposed to be the main event. The charge on Marye’s Heights was supposed to support another attack on the Union left. One thing led to another, as it does in war, and all day long the Union men walked a third of a mile, unprotected, uphill, into withering rife fire from troops protected by a stone wall and the natural trench formed by a sunken road, not to mention the fire of nine guns mounted on the the heights. A natural trench for the Confederate soldiers; a sickening surprise for the Federals attacking uphill from the city (to the left of this photo) toward the heights (to the right). This is the surviving part of the wall that sheltered the Confederate troops while they mowed down 18 waves of Federal troops in an attack that went on hour after hour, all that long day.

Talking to Joseph, and even before then, I realized that I felt like I had been sick and had recovered. That is, I had hated the Confederate leaders and politicians the way Hank hated Yankees. Until Joseph came in with his penetrating analysis, I hadn’t seen that there were two sets of issues entangled.

One level — preserve the Union (Elisha Hunt Rhodes) versus states rights (Sam Watkins). This was a productive tension that could have and should have gone on forever and we all would have been better off. But the second issue, abolition versus slavery, gradually emerged and became decisive. Only those who were captive to that system (as white Southerners were, fully as much as black Southerners) could fail to see that it was wrong for men to own men. The race question muddled the issue, but ultimately it became clear.

What I’m getting to is that I don’t didn’t used to appreciate that the Southern boys may have been fighting for slavery in effect but in their own minds were fighting for their own self-government. It doesn’t matter how flawed their analysis of the situation. What matters is that they were mostly good men fighting for what to them was a good cause. Maybe it’s always that way.

The real enemy is hatred, and revenge, and that’s found on all sides of all conflicts. That is the enemy we each need to fight, and that is the enemy that Jim and I, and Joseph and Hank, fought at Gettysburg when we did a joint retrieval for any remaining veterans of either side, and it’s what we fought when we walked Marye’s Heights together, and the Wilderness, symbolically wearing baseball caps with the emblem of that 19-year-old boy who risked his life to give dying men drink of water.

Jim at the sunken road. This was before we bought our hats.

It was all a long time ago, as we count time externally.

A symbol of triumph over hatred, the real enemy.

2 thoughts on “The real enemy”