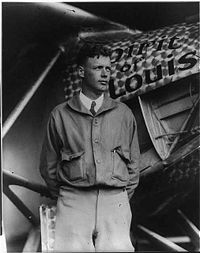 One of the things that is wrong with our civilization is that it systematically falsifies its history, disregarding or ridiculing anything dealing with psychic experience, or the existence of a non-physical world, or anything demonstrating that time is not the simple obvious thing we think it is.

Enter into evidence The Spirit of St. Louis by Charles Lindbergh, written when he was in his fifties, describing the life-changing experience he had at age 25, while he was alone over the North Atlantic in a single-engine airplane attempting to fly from New York to Paris.

As you read these passages, you might ask yourself why none of this makes it into the history books.

As the minutes pass and no new incident occurs, I fall into the state of eye-open sleep again. I fly with less anguish when my conscious mind is not awake. At times I’m not sure whether I’m dreaming through life or living through a dream. It seems I’ve broken down the barrier between the two, and discovered some essential relationship between living and dreaming I never recognized before. Some secret has been opened to me beyond the ordinary consciousness of man. Can I carry it with me beyond this flight, into normal life again? Or is it forbidden knowledge? Will I lose it after I land, as I’ve so often lost some essence of some midnight’s dream? (page 375)

When I am staring at the instruments, during an unearthly age of time, both conscious and asleep, the fuselage behind me becomes filled with ghostly presences — vaguely outlined forms, transparent, moving, riding weightless with me in the plane. I feel no surprise at their coming. There’s no suddenness to their appearance. Without turning my head, I see them as clearly as though in my normal field of vision. There’s no limit to my sight — my skull is one great eye, seeing everywhere at once.

These phantoms speak with human voices — friendly, vapor-like shapes, without substance, able to vanish or appear at will, to pass in and out through the walls of the fuselage as though no walls were there. Now, many are crowded behind me. Now, only a few remain. First one and then another presses forward to my shoulder to speak above the engines noise, and then draws back among the group behind. At times, voices come out of the air in self, clear yet far way, traveling through distances that can’t be measured by the scale of miles; familiar voices, conversing and advising on my flight, discussing problems of my navigation, reassuring me, giving me messages of importance unattainable in ordinary life.

Apprehension spreads over time and space until their meanings disappear. I am not conscious of time’s direction. Figures of miles from New York and miles to Paris lose their interest. All sense of substance leaves. There’s no longer weight to my body, no longer hardness to the stick. The feeling of flesh is gone. I become independent of physical laws — of food, of shelter, of life. I’m almost one with these vapor-like forms behind me, less tangible than air, universal as aether. I’m still attached to life; they, not at all; but at any moment some thin band may snap and there’ll be no difference between us.

The spirits have no rigid bodies, yet they remain human in outline form — emanations from the experience of ages, inhabitants of a universe closed to mortal men. I’m on the borderline of life and a greater realm beyond, as though caught in the field of gravitation between two planets, acted on by forces I can’t control, forces too weak to be measured by any means at my command, yet representing powers incomparably stronger than I’ve ever known.

I realize that values are changing both within and without my mind. For 25 years it’s been surrounded by solid walls of bone, not perceiving the limitless expanse, the immortal existence that lies outside. Is this death? Am I crossing the bridge which one sees only in last, departing moments? Am I already beyond the point from which I can bring my vision back to earth and men? Death no longer seems the final end it used to be, but rather the entrance to a new and free existence which includes all space, all time.

Am I now more man or spirit? Will I fly my airplane on to Europe and live in the flesh as I have before, feeling hunger, pain, and cold, or am I about to join these ghostly forms, become a consciousness in space, all-seeing, all-knowing, unhampered by materialistic fetters of the world?

At another time I’d be startled by these visions; but on this fantastic flight, I’m so far separated from the earthly life I know that I accept whatever circumstances may come. In fact, these emissaries from a spirit world are quite in keeping with the night and day. They are neither intruders nor strangers. It’s more like a gathering of family and friends after years of separation, as though I’ve known all of them before in some past incarnation…. What strange connection exists between us? If they’re so concerned with my welfare, why didn’t they introduce themselves before?

I live in the past, the present, and the future, here and in different places, all at once. Around me are old associations, bygone friendships, voices from ancestrally distant times. Vistas open up before me as changing as those between the clouds I pass. I’m flying in a plane over the Atlantic Ocean; but I am also living in years now far away. (pages 389-91)

3 thoughts on “Lindbergh Among The Spirits”