From http://www.azstarnet.com/sn/mailstory-clickthru/232024.php via a friend. There is always hope; you can never tell who’s going to get the word. 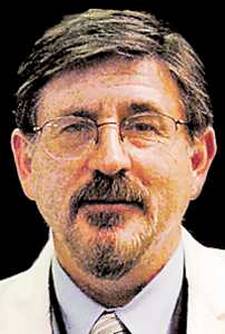 He is a doctor in love with his patients.
It is to them he gives thanks for the unexpected, life-changing journey that took him beyond this world of scientific fact to the otherworldly realm of the spirit and the soul.
Never in his wildest dreams did Dr. Allan J. Hamilton — a renowned University of Arizona neurosurgeon devoted to the super-technology of his specialty — expect to go there.
Most doctors don’t. Some have called their colleague “a nut” for admitting he did.
Hamilton shrugs. He gets that.
“If you had told me 20 or 30 years ago that I would go through this kind of change in my thinking about what medicine — and life — is really all about, I’d have said you’re nuts,” said the Harvard-trained brain surgeon, now 58.
“When I started as a surgeon, I was really focused on surgical, technical skills. It’s a very mechanistic view — you go in and fix things. You are so focused on that, you tend to blow by anything you see that suggests the spiritual.

“But over time, these experiences with my patients began to accumulate. I was unprepared for that. Through all the rigorous training I’d had, no one ever said, ‘You are going to see things you don’t understand, things that will put your own spirituality on notice.’ ”
The things Hamilton saw along the way — and the profound transformation they triggered — he finally put together in a fascinating chronicle titled The Scalpel and the Soul: Encounters with Surgery, the Supernatural, and the Healing Power of Hope, now on sale at all major bookstores.
As a surgeon who probes the human brain, Hamilton was in the catbird seat to witness — and ponder — what happens to us in the face of life-threatening illness, confronting our mortality.
“If you ask a patient under this kind of threat, ‘Would you turn back the clock and undo this,’ they say yes, biologically, they don’t want to be sick,” he said.
“But then they always say — every one of them — no, they would not want to be the person they were before this happened. Now they are focused on what’s important in life. They are dramatically changed.”
Among the many patients who deeply affected Hamilton was a World War II veteran who suffered a serious heart attack but survived to tell his doctor, Hamilton, of his near-death experience — the feeling of deep peace, intense love, of “going home” as he was dying.
“When he came back from it, he was so full of zest and the joy for life. For me, it was exhilarating to see how alive he’d become,” Hamilton said.
Much of that patient’s joy lay in the lifting of the unspoken grief so many veterans of war carry with them for the rest of their lives.
After his brush with the afterlife, the old soldier told Hamilton he realized that the deaths of his fellow soldiers had not been terrible for them, at all.
“That horror was finally gone from him,” Hamilton said.
Another patient who “shook me to my core,” Hamilton said, was a young boy who had suffered severe burns and lay in a coma for a month. During that time, his father had died, unbeknown to him.
One day, against all odds, the child regained consciousness. Very clearly, he told Hamilton his father was standing at the foot of his bed, smiling at him.
“I know without a shadow of a doubt that what Thomas saw was his father’s actual spirit standing there, watching over him,” Hamilton wrote in his book.
“Here was my own fragile moment of awakening.”
These kinds of inexplicable events, occurring throughout Hamilton’s 30 years of doctoring, changed him from a man whose awareness of religion had “pretty much fallen by the wayside” to one who fully believes “that all of us are connected to a power far greater than ourselves.”
Though this transformation may have caught Hamilton by surprise, it is not all that odd to anyone who has followed his extraordinarily creative and multi-faceted career and life. He has always pushed the envelope in one way or another.
While earning national acclaim for pioneering cutting-edge techniques in precision brain surgery using computers, lasers and robotics, Hamilton taught controversial classes in “horse whispering” to his medical students, to teach them sensitivity to their patients.
Every February, you’ll find him hanging on the fence at the Tucson rodeo — he’s the rodeo doc. In the meantime, he consults on scripts for the TV hit “Grey’s Anatomy.”
But it was not until he got bucked off one of his horses and broke his back three years ago that he began to make sense of what he calls “this pile of junk” — his notes and scribblings about spiritual experiences with his patients.
Laid up for months, his surgical career ended by the injury, Hamilton — the UA’s former chief of surgery, and a professor of neurosurgery, psychology and radiation/oncology — finally decided to come to grips with what it all meant and write a book about it.
“I saw from the start he had nuggets of gold in it, and I strongly encouraged him,” said Dr. Andrew Weil, founder of the Integrative Medicine program at UA, who has earned worldwide fame for melding mainstream and alternative medicine.
Hamilton asked Weil — a longtime friend — for advice early on.
“I’m really impressed with his writing and storytelling,” Weil said. “You can’t put the book down.”
So far, reactions among his fellow physicians have ranged from “you’re a nut” to “I’ve seen these things, they’ve happened to me, too,” Hamilton said.
“Surgeons are the most conservative group in the world. I know many of them wonder why I’m even talking about this stuff,” he said.
“But over and over, others have come to me with their stories. This is happening every single day in every single hospital. But we have not been willing to discuss this with our patients, even when they are begging us to.”
In the end, it was for his patients, and because of his patients, that Hamilton wrote his book. They taught him the most vital of all lessons.
“You begin to wonder about the underlying premise in medicine — can you learn to love a perfect stranger perfectly?” he said.
“Ideally, absolutely, that is the heart and soul of medicine — to care for a human being in the way you want someone you love to be cared for.
“The soul needs as much intensive care as the body.”
? Contact reporter Carla McClain at 806-7754 or at cmcclain@azstarnet.com.