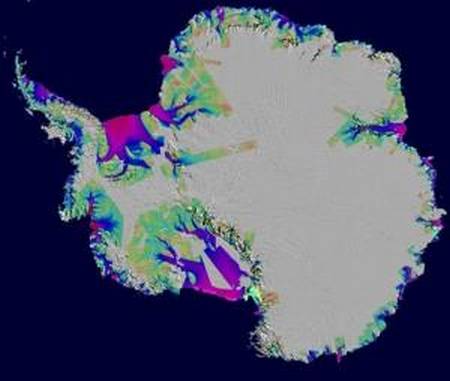 Antarctic ice loss between 1996 and 2006, overlaid on a Moderate Resolution Imaging Spectroradiometer (MODIS) mosaic image of Antarctica. The colors indicate the speed of the ice loss. Purple/red is fast. Green is slow. Image credit: NASA

Antarctica looks to us, on our maps, as one roughly circular continent. Ground-penetrating radar, however, shows it as two parts — to the East, the largest part, an elliptical-shaped mass. To the West, the Palmer peninsula and adjacent territories, actually an archipelago. Between the two, land that is actually below sea level. In other words, the ice conceals the fact that what seems to be one land mass is actually a land mass and adjacent islands.

I’m no scientist, but the map above seems to say that the ocean is reclaiming its own, melting the ice that does not sit on land. What does it say to you?

3 thoughts on “As the ice retreats”