Sure, it’s going to be easy to mock. You can imagine the strange people who are going to show up to stand in reflected moonlight — there is a reason, after all, why mentally disturbed people are called loonies (luna-ies, so to speak). But I find this idea fascinating, and if the collector weren’t so far away, I’d visit. It will be interesting to see if anything comes of it. (I was amused that the author — or perhaps the editor — felt compelled to include a scientist’s statement that there was no scientific evidence of effects — of something that hasn’t yet been studied!) 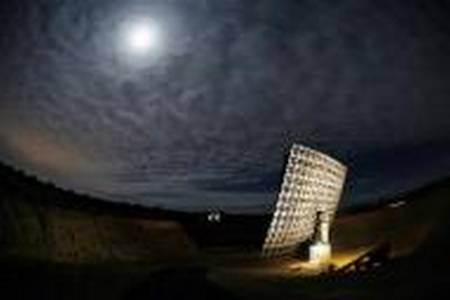 THREE POINTS, Arizona (Reuters) – Financial advisor Jaron Ness stands in the cool desert air waiting for the clouds to clear and the moon to rise.

As the conditions come into alignment, he steps into the path of a cool blaze of blue-white light bounced off a wall of highly polished parabolic mirrors five stories high.

“It feels magnetic,” he says, turning his hands slowly in the reflected glow of the light from the almost full moon.

The young professional from Colorado is among a growing number of curious people beating a path to this patch of scrub-strewn land out in the Arizona desert to bask in light from the world’s first moonbeam collector.

A Tucson-based inventor and businessman Richard Chapin and his wife Monica are behind the giant device, which gathers up and focuses the light of the moon.

The effect of the moon’s gravitational pull on the Earth’s tides and other natural phenomena has been studied for millennia. Less attention has focused on the sunlight reflected from its surface.

The Chapins built the large, one-of-a-kind contraption that stands in the desert some 15 miles west of Tucson, Arizona, in the belief that moonlight might have applications for medicine, industry and agriculture.

“So much work has focused on the sun. We have just forgotten about this great object that has been here for billions of years, has affected us in all forms of our evolution,” said Chapin, who paid for the project with his own money.

“If it could affect plants and animals … I thought, ‘what could the amplification of that light do?'”

Neither of the Chapins are scientists. The couple used income from a popular swap meet they own in Tucson to develop what they call their “Interstellar Light Collector,” which has so far cost them $2 million.

It consists of a large frame sunk into a 45-foot-deep (14-meter) crater, on private land in sparse desert, in an area known for its dark skies a few miles from the Kitt Peak National Observatory.

The device is five stories tall and weighs 25 tons, and is covered with 84 mirrored panels set on a hydraulic mount that, the Chapins say, can focus the light of the moon with “the precision of a Swiss watch.”

There is no charge to use the facility, although the couple accept donations of $10 from people who use it to defray some of the operating costs.

So far they have had more than 1,000 visitors, with interest from as far a field as Australia, Japan, India and Saudi Arabia from people seeking either a new experience or in the hope of some kind of medical benefit.

Some dress in robes, others strip to their underwear to bask in the moon glow from the glittering bank of mirrors, spending anywhere from three minutes to 15 minutes at a time.

Visitors enjoy the experience. Some say it is like swimming underwater, while others say it feels like standing in a warm breeze and leaves them feeling upbeat.

“When I got in the moonlight it was an instant and profound sense of euphoria … it was very peaceful,” said Eric Carr, a hypnotherapist from Tucson who has visited several times.

Some visitors to the site believe that exposure to the moonlight has helped alleviate some medical conditions. After bathing in the moonbeams, Carr said he noticed an improvement in a long-standing asthma condition.

However, no clinical experiments with moonlight have been carried out on people. Scientists say there is no proof that it has any effect whatsoever on medical conditions and diseases, and are skeptical of anecdotal claims.

“I haven’t seen any hard scientific evidence that it’s not a placebo effect. There hasn’t been enough real research on it yet to say that it’s doing anything,” said Katherine Creath, research professor of optical sciences and medicine at the University of Arizona.

“But whether or not it’s the placebo effect or the light, I don’t think that matters as long as people feel like they are having a positive effect, then it’s worth it to them to do it,” she added.

The Chapins are eager for researchers to use the site to determine if moonlight does have any demonstrable applications in areas including medicine, plant biology and certain industrial processes. They also welcome visits by skeptics to the site.

Meanwhile, visitors continue trek out to the imposing installation and listen to ambient music as they wait for a break in the clouds to step into the moonlight. For them, it is a very enjoyable experience in itself.

“You feel almost like you are in heaven,” said Aranka Toniatti, a cancer patient who has driven from Colorado twice to stand in the moonlight. “It’s a gorgeous feeling.”