Can we put the genie back into the bottle? Probably not, but perhaps we can hope that at least a few scientists will start to question whether anything and everything that could be done should be done. From http://www.telegraph.co.uk/earth/main.jhtml;jsessionid=XFT2IYJUHGB4FQFIQMFSFF4AVCBQ0IV0?xml=/earth/2007/11/16/scidolly116.xml via the ever-interesting Schwartzreport.

The scientist who created Dolly the sheep, a breakthrough that provoked headlines around the world a decade ago, is to abandon the cloning technique he pioneered to create her.

Prof Ian Wilmut’s decision to turn his back on “therapeutic cloning”, just days after US researchers announced a breakthrough in the cloning of primates, will send shockwaves through the scientific establishment. 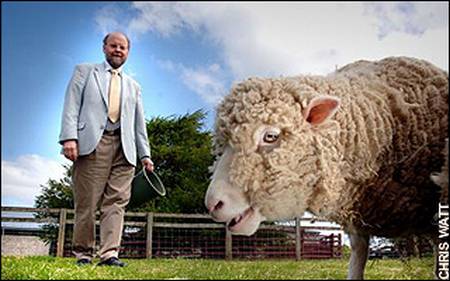 Ian Wilmut, the creator of Dolly the Sheep

He and his team made headlines around the world in 1997 when they unveiled Dolly, born July of the year before.

But now he has decided not to pursue a licence to clone human embryos, which he was awarded just two years ago, as part of a drive to find new treatments for the devastating degenerative condition, Motor Neuron disease.

Prof Wilmut, who works at Edinburgh University, believes a rival method pioneered in Japan has better potential for making human embryonic cells which can be used to grow a patient’s own cells and tissues for a vast range of treatments, from treating strokes to heart attacks and Parkinson’s, and will be less controversial than the Dolly method, known as “nuclear transfer.”

His announcement could mark the beginning of the end for therapeutic cloning, on which tens of millions of pounds have been spent worldwide over the past decade. “I decided a few weeks ago not to pursue nuclear transfer,” Prof Wilmut said.

Most of his motivation is practical but he admits the Japanese approach is also “easier to accept socially.”

His inspiration comes from the research by Prof Shinya Yamanaka at Kyoto University, which suggests a way to create human embryo stem cells without the need for human eggs, which are in extremely short supply, and without the need to create and destroy human cloned embryos, which is bitterly opposed by the pro life movement.
advertisement

Prof Yamanaka has shown in mice how to turn skin cells into what look like versatile stem cells potentially capable of overcoming the effects of disease.

This pioneering work to revert adult cells to an embryonic state has been reproduced by a team in America and Prof Yamanaka is, according to one British stem cell scientist, thought to have achieved the same feat in human cells.

This work has profound significance because it suggests that after a heart attack, for example, skin cells from a patient might one day be manipulated by adding a cocktail of small molecules to form muscle cells to repair damage to the heart, or brain cells to repair the effects of Parkinson’s. Because they are the patient’s own cells, they would not be rejected.

In theory, these reprogrammed cells could be converted into any of the 200 other type in the body, even the collections of different cell types that make up tissues and, in the very long term, organs too. Prof Wilmut said it was “extremely exciting and astonishing” and that he now plans to do research in this area.

This approach, he says, represents, the future for stem cell research, rather than the nuclear transfer method that his large team used more than a decade ago at the Roslin Institute, near Edinburgh, to create Dolly.

In this method, the DNA contents of an adult cell are put into an emptied egg and stimulated with a shock of electricity to develop into a cloned embryo, which must be then dismantled to yield the flexible stem cells.

More than a decade ago, biologists though the mechanisms that picked the relevant DNA code that made a cell adopt the identity of skin, rather than muscle, brain or whatever, were so complex and so rigidly fixed that it would not be possible to undo them.

They were amazed when this deeply-held conviction was overturned by Dolly, the first mammal to be cloned from an adult cell, a feat with numerous practical applications, most remarkably in stem cell science.

But although “therapeutic cloning” offers a way to get a patient’s own embryonic stem cells to generate unlimited supplies of cells and tissue there is an intense search for alternatives because of pressure from the pro-life lobby, the opposition of President George W Bush and ever present concerns about cloning babies.