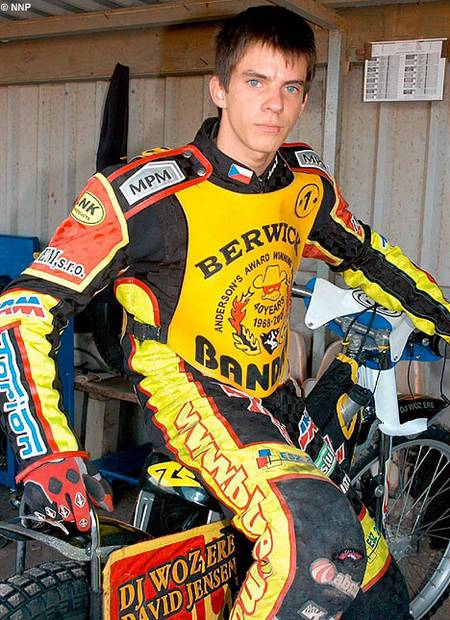 Czech Matej Kus, 17, was banged on the head in a racing accident – and came to speaking perfect English

When Matej Kus’s teammates heard him talking after he was knocked out in a speedway accident, they were relieved he was conscious.

But they were also a little surprised.

For although the 18-year- old Czech knew only the most basic English phrases, he was conversing fluently in the language with paramedics.

Peter Waite, the promoter for Kus’s team, the Berwick Bandits, said: “I couldn’t believe what I was hearing.

“It was in a really clear English accent, no dialect or anything. Whatever happened in the crash must have rearranged things in his head.

“Before his crash Matej’s use of the English language was broken, to put it mildly.

“He was only just making a start on improving it and struggled to be understood, but was keen to learn.

“Yet here we were at the ambulance door listening to Matej talking to the medical staff in perfect English.

“Matej didn’t have a clue who or where he was when he came round. He didn’t even know he was Czech.

“It was unbelievable to hear him talk in unbroken English.”

The teenager, who injured a knee in Sunday’s accident in Glasgow, is once more struggling to make himself understood in English.

After flying home to the Czech Republic to recover, he said – through an interpreter – that he remembered nothing of the accident or of the following two days.

Yesterday he added: “It’s unbelievable that I was speaking English like that, especially without an accent.

“Hopefully I can pick English up over the winter for the start of next season so I’ll be able to speak it without someone having to hit me over the head first.

“There must be plenty of the English language in my subconscious so hopefully I’ll be able to pick it up quickly next time.”

After the accident, team spokesman Lawrence Heppell said: “He was out cold for 45 minutes and he has been told by the medics to rest for at least a month.

“Matej could only string two or three words of English together and now he can speak it like a native, it’s incredible.”

Mr Waite added: “I’ve heard of other people getting knocked out and waking up talking fluent Italian or in one case even developing a Welsh accent.

“I never really believed it was possible but this incredible thing was happening in front of us.”

6 thoughts on “News item from This is London”