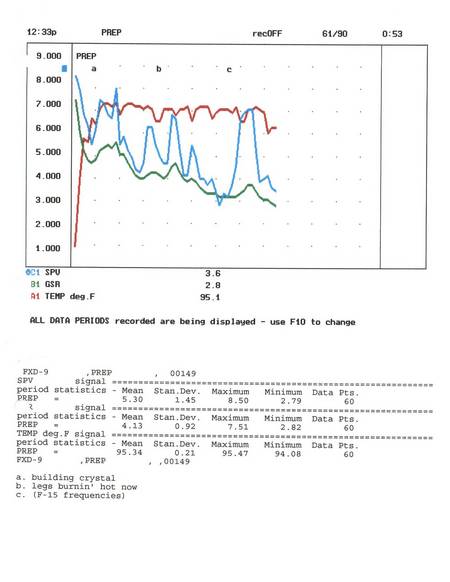 S: So, lots of attention to the body today.

F: How the times change. Thanks. Would you — Well, I said thanks before I asked–

S: Of course. But it may not be on with all this hullabaloo politically [this was the week of the presidential election that got involved in recounts], it might not be on.

F: This is – I don’t know – have you ever heard anything that corresponds with what we heard today about this? About going down to the base chakra and working from there?

S: You know, I wanted to ask you, in the booth, and figured it would be better out here, but remember what your brother said about the raincoat?

F: Oh! oh! Not a raincoat, it’s the old overcoat analogy from my Gateway. Where I was able, using my new tricks, I was able to keep myself warm wearing a shirt much like this, whereas Bob [Friedman] was not any too warm in a heavy topcoat. But I also realized, that’s why we have coats, so that you don’t have to spend your time maintaining that state. But you can do it; but – why bother?

S: Why not just put a coat on?

F: Yeah, exactly. And then of course the short term reason because this solidified my sense that in fact this is real. You know, the magic is real. And the long term sense, yes of course, wear the coat because you have other things you want to do.

S: Okay. To me dealing with the base chakra was the same kind of a concept in terms of – yes, there are energetic causes to disorders, but when it’s gone far enough that it’s manifest in the physical, that it needs to be dealt with through the base chakra.

F: Have you ever heard anybody talk about doing it that way?

S: No. Not in that context.

F: I got a real sense of ___, too, that ___ can do this quite easily, and I think it’s important. I’m going to use this of course with Louis next week and we’ll see what we do. I wonder how we go about – I should have asked this, I didn’t think about asking it at the time – I wonder how we go about explaining to – Oh, the answer’s coming that in fact they’ll know. I was going to say how do you teach people to do that, and the answer is once you give them the concept, they’ll figure it out. But it’s a big thing, I think. It really is.

Going into that session, I thought, okay, well we’re going to somewhere else, so we’ll go out [laughs] and I went somewhere I’ve never been before; my body. [they laugh]

Comments on the electronics of it, or the signatures?

S: I thought it was quite typical. There was a tendency to move down toward the null point. Your warming is just perfect, coming up here. GSR coming down here. A little bit of arousal, when talking, but generally going right down.

S: These big strong peaks here; to me when I was watching it on the screen, it was like, “oh okay, here he goes, he’s on his way down” and then something would happen, and you’d get wrapped up in trying to figure out and understand what had happened.

F: Was it that or was it the effort of reporting it? Of putting it into words? What do you think?

S: I think that that’s what I just said.

S: Trying to struggle with it, right.

F: Which still bounces me out of it to a degree. Okay.

S: Right. And again I would listen to the tense of your verbage. At times when you were present tense active voice and other times when you would back out and have to use metaphor, simile, and conditional debriefing past tense verbs —

F: That would all be out of the experience.

F: What happened here, you’ve got this enormous leap from 4 to 7 on the blue line.

S: Right, so this is right when you went back to focus 12.

F: What part of it, more or less, was the part when I was giving that kind of robotic voice because the stuff was just coming out?

S: Yeah, that was right in here.

F: That was there.

S: They were dictating.

S: But I – it might be a nice exercise when you type this one out, and go back with a highlighter and look for verb tenses, and conditional metaphor debriefing phrases to see when it’s into it and when it’s out of it.

F: Mm-hmm. I sure wish there were an easier way to correlate the tape with this. Does this have – are these dots x number of minutes apart? I mean, is there any kind of a —

S: Sure, the whole thing is 61 minutes wide from here to here, and so these are probably five minute marks. But what you would like to see is a video tape, with your audio on one side and your video over here.

F: Yeah, that’s true. We going to be able to do that with the new machinery?

S: It’s technically possible now. You’ll just have to give me some time to set it up, to make it happen.

F: Have you ever done it?

F: That’s what I heard. Well, if all it requires – that’s worth it for the institute, too, isn’t it?

S: Well, it’s just me switching some wires around here. I have to hook that box up to this video monitor instead of that, so it takes rerouting some wires and hooking some things up.

F: Can we do that for the last session next week?

F: Okay. Let’s do that, that’d be interesting. This – you know, we’ve had various patterns, including I think you said the classic U shaped pattern. But this one is one, two, three, four, five, six major peaks and corresponding valleys, and it ranges from 8 down to 3.

S: And again, that has to do with, as you said, your struggle for explanation. You know, there are times during the session when I’m wanting to say, “I just wish Frank would shut up and experience it,” and yet I know because of your character, it’s very important for you to serve as a journalist at the same time.

S: To bring it back. So it’d probably be better if you just take pictures while you’re there. [chuckles]

F: Remember the time you and Dave did a session with Kelly and me, and then you had me come back the following week to get a baseline. And you said, “okay, you don’t need to say anything if you want, just experience it.” And so you had this whole hour-long tape of my breathing effects. Which was actually quite interesting, because I could hear parts of it going [panting noises] but because I didn’t report anything, it’s all gone, and I had no sense of it. And to me to do this without reporting, I think that’s my primary purpose here, is to be a reporter.

S: I have those feelings and those thoughts while the session is going on, but then when I look at the overall chart afterwards, I say, it was okay, he was still moving. It isn’t like it is keeping him or blocking him from doing anything.

F: Yeah, this one is – this is an amazing curve–

F: And boy does it smell. [laughs]

S: You know, it’s like they can reorient the sense of who they are, and then pretty soon they bridge outside of 12. “I’m not only my foot but -” [they laugh]

F: “There may be other things I’m doing!”

What’s our temperature look like this time? 95.3? So that’s just about normal, that’s not particularly warm.

S: Right, that was the mean. You warmed up to that.

F: Yeah, warmed up quickly, though.

S: You learned how to relax.

F: You didn’t even call for the resonant tuning, so I don’t know if you heard me doing it on my own.

F: Yeah, that’s good. All right, anything else that comes to mind?

S: Not really, other than I want to say, as I did just before the session, you seem to be in a really good space in your life right now. In terms of, you know you have these new horizons with this new book, your own book is coming out, things seem to be a little smoother in the office, you seem to be in a good place.

F: Things are moving. Part of that’s your fault.

F: A good part of that’s your fault, Skip, this whole – Don’t think you’re not going to get sued for it.

F: Next week we’ll do video. That’ll be great.

S: Yes, and it’ll just take me a few minutes to switch some plugs and get set to go. But we’ll actually videotape your biofeedback and hope that you don’t become overly concerned about it during the session.